The Looming Enrollment Disaster: Is it Time for Another Distraction from Watson and the Gang?

The dust-up created by the administration over the legitimacy of the Faculty Senate seems like another attempt to distract attention from the colossal failures of the Watson administration. In the next few days, we will discover how much more our enrollment has dropped. This might call for some kind of attack on the faculty because the only problems at Chicago State are directly attributable to its faculty, particularly its Faculty Senate. For those of you who believe in coincidence, here’s a chronology of events detailing the serendipity between various Watson scandals and the university’s attacks on Chicago State’s faculty:


WATSON SCANDAL: November 1-8, 2013. Posts on the blog detail evidence of the lies of top-level administrators.

WATSON SCANDAL: January 14-15, 2014. Angela Henderson’s plagiarism is front page news. An editorial agrees that her dissertation is rife with plagiarism.

UNIVERSITY ATTACK: March 7, 2014, the administration introduces its new “cyber-bullying policy” at a Board meeting. First reading. Policy passes May 9, 2014.

WATSON SCANDAL (Never ending): March 11, 2014, the Crowley damages increased to over $3 million by judge. Thomas Wogan says that “the university’s insurance would cover the damages.”

UNIVERSITY ATTACK: September 5, 2014. Young moves against the Senate, endorses Watson's position without a shred of evidence or any inquiry.

WATSON SCANDAL: September 22, 2014, Enrollment Management report is a disaster. Enrollment at 5208, down another 493 (8.6 percent) from Fall 2014. Although there are still 4 days until the official figure is tabulated, this decrease represents a drop of 2154 students (29.3 percent) from Fall 2010. There is some question whether the university's insurance will cover the purposeful acts of Watson and Patrick Cage in the Crowley case. Will CSU have to pay for their misconduct?

UNIVERSITY ATTACK: Unknown at this time, what do you think the next distraction will be?

Now I will turn to a discussion of the damages awarded in the Crowley case. Here are the guidelines for punitive damage awards which judges are permitted to give to civil juries. http://www.state.il.us/court/CircuitCourt/CivilJuryInstructions/default.asp): 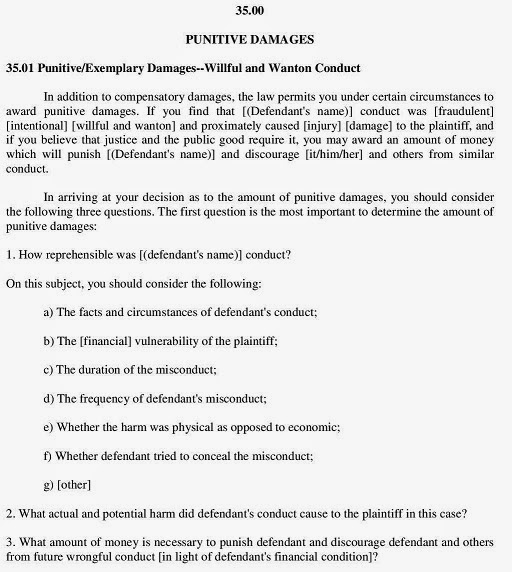 For a moment, let us consider Tom Wogan’s cavalier claim in March that the damages awarded to Crowley would be paid by the university’s insurance. Is that really true? In most liability policies, there are exclusions for intentional acts. The jury awarded Crowley $2 million in punitive damages because the jurors believed both Watson and Patrick Cage acted purposely and with malice. In fact, both of these two administrators found their testimony impeached, because they were untruthful under oath, a fact noted by McCarthy in his opinion of August 28, 2014. Although I am not an insurance expert, I believe that the university’s insurance, WILL NOT cover the damages awarded in the Crowley trial because the defendants, by their “willful and wanton” conduct created the liability. In other words, their intentional actions caused the damage to Crowley. Anyone interested in this can simply consult the policy exclusions for virtually any liability policy. So, the taxpayers of Illinois will foot the bill for the misconduct of Watson and Cage. Truly, this administration deserves everyone’s unqualified support. The question is how much money will these fools cost this school in the next few years?

Posted by Robert Bionaz at 6:37 AM