The Administration's Lies: Here is What Transparency, Accountabilty, Responsility and the Committment to Academic Rigor Really Look Like at Wayne Watson's Chicago State University

Here are policies relevant to the hiring of employees at Chicago State University.

"Integrity
The University expects all employees to act with integrity at all times in the workplace, or when representing the company. The following list gives examples of lack of integrity, although it should not be considered an exhaustive list:
• falsification of employment application, official academic transcripts, degrees or other records"
Page 9 of the Chicago State University Human Resources Policy Manual, available here: http://www.csu.edu/results.htm?cref=http%3A%2F%2Fwww.csu.edu%2Fcref_cse.xml&cof=FORID%3A9&q=Human+Resources+policy&sa=Go).

Here is the statement on the CSU application that addresses untruthfulness by applicants. The consequences for lying on an application are clear: termination when the lies are discovered:

At Wednesday's PEC meeting, Wayne Watson apparently reiterated his commitment to transparency, a platitude he has continuously articulated. Of course, since the truest indicator of how a person feels is behavior not rhetoric, Watson's actions often contradict his stated belief in "transparency." Watson has also frequently pontificated about "responsibility" and "accountability." In the past four years, the Chicago State community has seen various examples of how much Watson values these ideas. Even before he began at CSU he criticized its faculty publicly, soon after assuming the presidency he began meddling in curriculum and imposed his re-organization scheme on two of the school's colleges. He and his administration have subsequently attempted to stifle expression on campus and dictate academic standards to faculty. He has created extra-contractual statuses for tenure-track faculty, violated the CSU-UPI contract on various and sundry occasions and is now involving himself in the hiring of faculty. He apparently expressed the belief (I'm paraphrasing here) at the PEC meeting that he needed to interview faculty members to ascertain whether or not they were "afraid" to teach here. What that says about his perception of both CSU students and faculty, I will leave for the reader to decide. Watson has also taken it upon himself to uphold the highest standards of the academy by weighing in on degrees and the quality of schools attended by CSU faculty applicants (across disciplines, it seems like he has a Ph.D. in everything). He has apparently decided that no one without a Ph.D. in hand should be hired at Chicago State and has often expressed the notion that CSU faculty should be able to "transfer" to Harvard.

As I demonstrated in previous posts, Watson has apparently failed to apply the same stringent standards to some of the members of his administrative "team." In the case of Cheri Sidney, lying on her resume has resulted in promotions and raises. Angela Henderson's untruthful omissions and exaggerations on her resume have similarly resulted in promotions and raises. I will soon be discussing the case of Tyra Austin, another administrator who has falsified her resume and application. Although Human Resources has policies in place to deal with academic misrepresentations, the administration has not terminated any of the individuals who have included demonstrable lies on their resumes and applications. Rather, Watson concerns himself with the "incivility" of the faculty blog and the fact that the exposure of (public information) portions of someone's personnel file makes them feel bad. Clearly, his administration has demonstrated no will to address these serious issues of untruthfulness. Fortunately, the Freedom of Information Act exists to enable citizens to access public information that will allow them to assess how public agencies operate. Combined with other public records, the disclosures under FOIA make it possible to obtain a clear picture of how the Watson administration operates in both its hiring practices and its adherence to university policies and procedures.

This information raises troubling questions about the integrity of Chicago State's administration. In fact, the Watson administration has engaged in a series of untruthful representations regarding the educational qualifications of Angela Henderson. These include falsehoods about her degree status on the university's website and extend to the official records of the Chicago State University Board of Trustees. The following documents demonstrate:

This is the material from the University website under the title of the "President's Operations Team." The information on Angela Henderson has been updated to reflect the recent award of her Ph.D. However, for several months prior to her receipt of the degree, the Chicago State website listed her as "Angela Henderson, Ph.D," the Vice President of Enrollment Management. Of course, based on the chronology of events surrounding the award of her degree, Angela Henderson never held a Ph.D. while she was the Vice President of Enrollment Management. She received her Ph.D. some six weeks after (August 11, 2013) her appointment as interim provost on July 1, 2013. Nonetheless, the university claimed for several months that she held the Ph.D., although the text clearly contradicts that claim. The material below I downloaded from the university website on July 8, 2013: 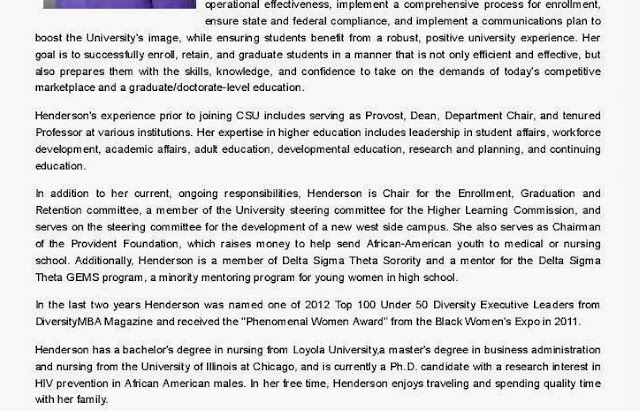 The below material is the earliest reference I have found on the CSU website to Angela Henderson as "Dr. Angela Henderson." This is a portion of the Enrollment Management Organizational Chart dated November 27, 2012, nearly nine months before Henderson received her Ph.D. (The organizational chart is available here: www.csu.edu/enrollmentmanagement/pdf/EMOrgChart_002.pdf): 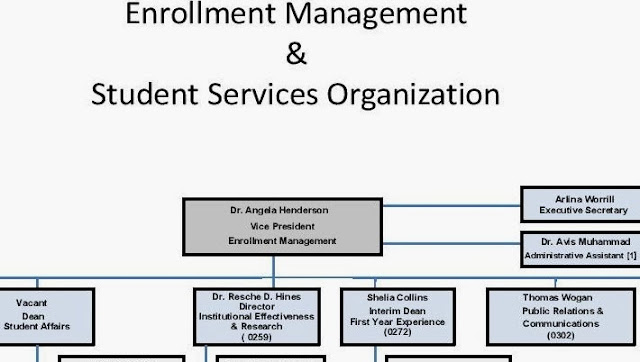 Next is an undated press release that appeared in early 2013, most likely in late January or early February. Again, this is several months prior to Henderson earning her degree. Nevertheless, the press release refers to her as "Dr. Angela Henderson," with her title (the press release is available here: www.csu.edu/news/winsaccolades.htm): 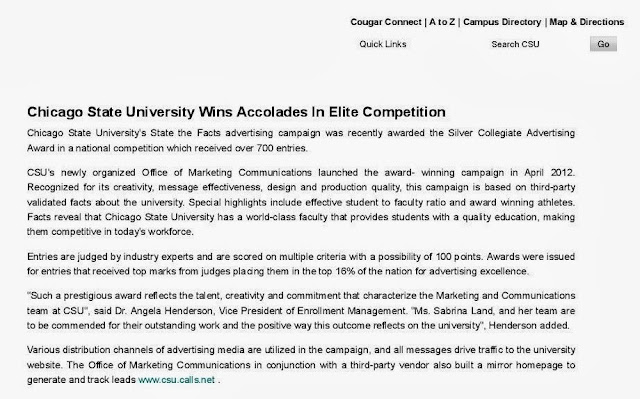 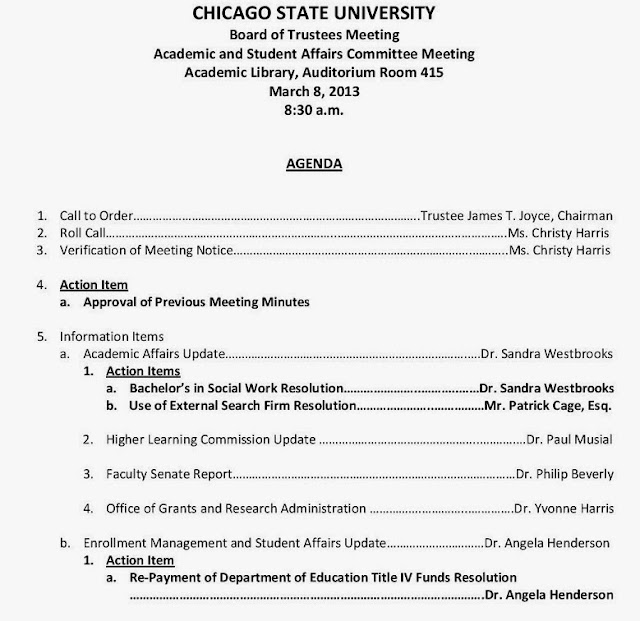 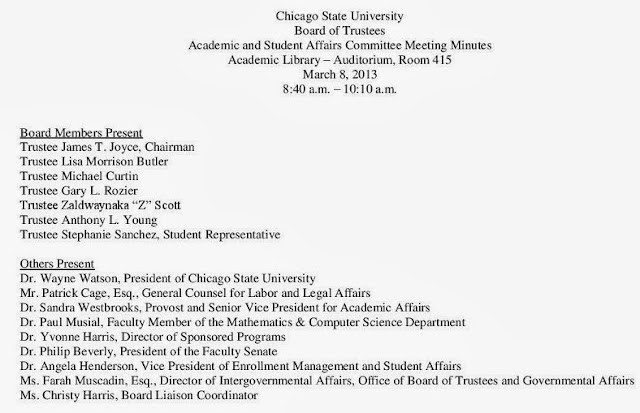 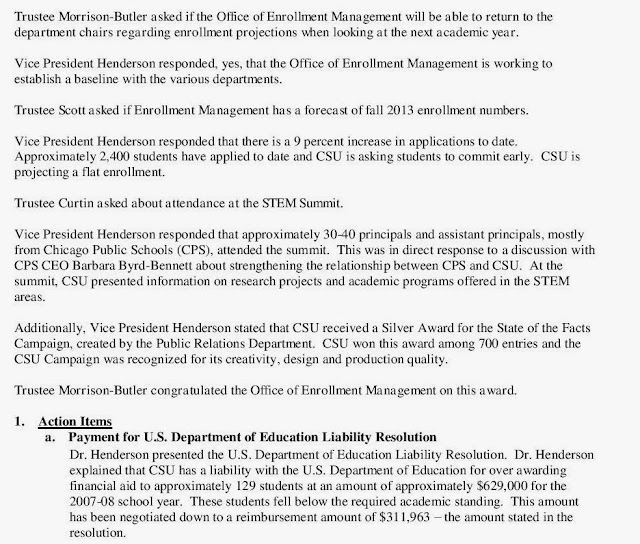 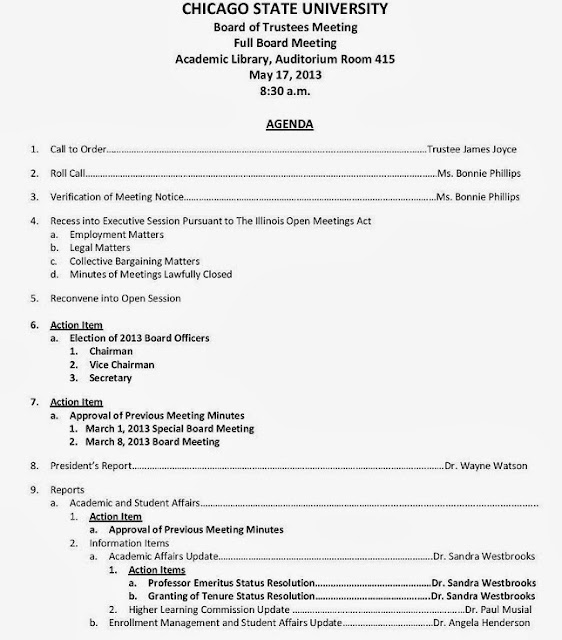 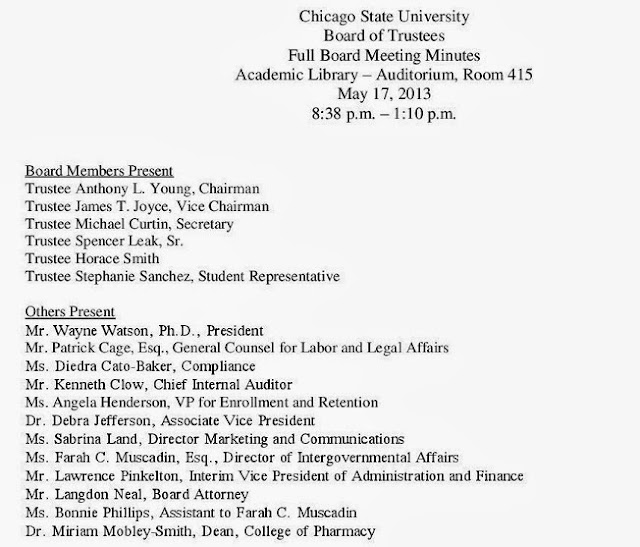 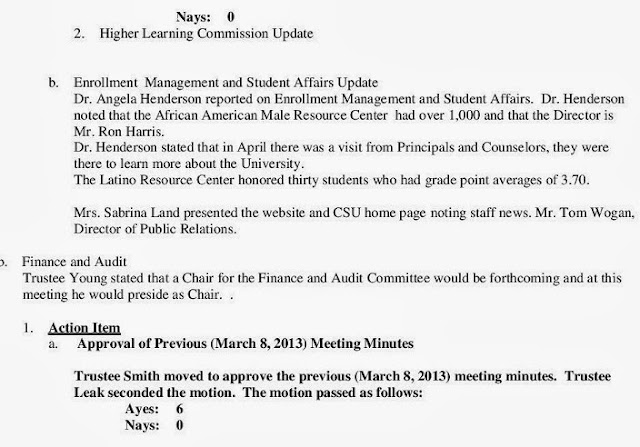 The appearance of these misrepresentations in the official agendas and minutes of the Board of Trustees raise the question of why these records have never been corrected. Equally troubling, the misrepresentation of Henderson's academic credentials is not an isolated incident. The university website currently lists "Renee Mitchell, Ph.D." as the Director of Human Resources. However, according to Mitchell's resume, her degree is actually a Doctorate of Management from the University of Phoenix. While Mitchell possesses a doctorate, it is not a Ph.D. and should not be listed as such anyplace in official university records or on a website accessible to the public. The brief biographical sketch also contributes to the misrepresentation as it describes her degree as simply "a doctorate in organizational leadership." 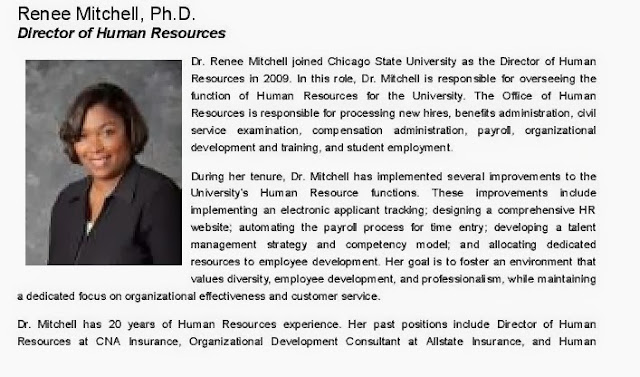 These various falsehoods and misrepresentations stand in counterpoint to the basic values of truthfulness and academic integrity that must undergird the culture of any university. I try not to speculate as to motive and I will not do so here. However, the "why" of these falsehoods is an intriguing question. Indeed, how do these kinds of misrepresentations appear without someone correcting them? The argument that no one in the administration knew about these falsehoods is hardly credible. Is this the work of some clerk? Finally, are we going to continue to display this kind of inaccurate information on our website? Little wonder why our school's reputation is often under attack. Of course, this must be the fault of the faculty and I should certainly have not brought any of this to light in such an impolite manner. In subsequent posts, I plan to address the issue of civility so helpfully raised by Wayne Watson.
Posted by Robert Bionaz at 6:56 AM