Here's Another Way to Falsify a Resume


I understand that in today's PEC meeting, Wayne Watson complained about the "incivility" on the faculty blog and expressed his belief that the things posted here constitute "cyber-bullying." In addition, he seemed aghast that someone's personnel material would be made public. Here's the answer to all those complaints. 1) I am not sure how to say in a nice way that someone has lied. Of course, the real text here might be that it is always preferable to say nothing, in which case Watson and his administration can continue to abuse the university's hiring system; 2) this ridiculous red herring is not worth a response; 3) this material, is, in fact, public information. All the resumes, job announcements and applications came from Chicago State in response to a FOIA request. Wayne Watson and his acolytes seem to be under the mistaken impression that Chicago State, rather than being a public institution, exists for their private benefit. I have posted only materials that contain untruthful statements. If someone does not wish to see her/his resume exposed publicly, do not lie on it. Is the administration contending that these resumes do not contain falsehoods? Does Wayne Watson find this behavior defensible? If so, I would love to see the evidence supporting either or both of those positions. I recognize this strategy for what it is: a ham-handed attempt to divert attention away from the egregious actions of Watson and his administrators and onto the behavior of his critics. That said . . .

Here's another example of a falsified resume, this one from our current Interim Provost Angela Henderson. Henderson's resume claims differ from those of Cheri Sidney since Henderson does not actually list a non-existent degree on her resume. However, the problems start on page 3 and 4 when Henderson, in an application submitted March 18, 2011, asserts that she will receive her PhD on June 30, 2011. Henderson repeats this assertion on page 1 of her resume, when she writes that she is a PhD candidate with an "(anticipated completion by June 2011)". As her degree verification from the University of Illinois at Chicago indicates, she received her Ph.D. in Nursing on August 11, 2013. It seems unlikely that someone seeking a Ph.D. would not realize that they were more than two years away from finishing. Thus, this claim is apparently untruthful, and at best misleading. The following documents, the degree verification from UIC, page 3 of her application, page 1 (shown as page 6 of 11) of her resume, demonstrate the apparent falsity of Henderson's claims. 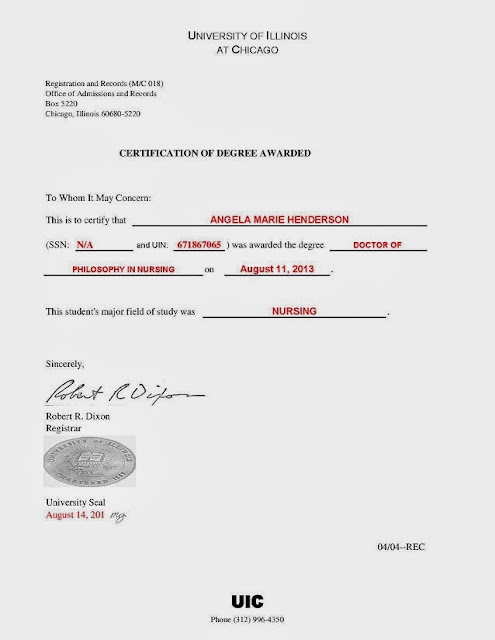 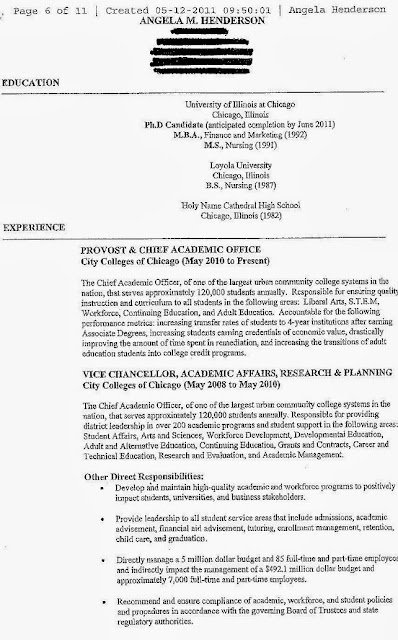 Most egregious is Henderson's omission of her 2002-03 demotion to teaching status and pay cut of nearly 1/3. There is obviously a story behind this and I will offer my speculation as to what it may be. As you can see from the next document, the president of Olive Harvey College, Lawrence A. Cox, resigned on August 9, 2002. Cox was a controversial figure, having earned a vote of no confidence from his faculty in 2001, partly for his autocratic management style. As you can see from the following documents, prior to Cox's departure, Henderson, then known as Angela Starks, did quite well at Olive Harvey: promoted first to department chairperson in 1998, then to Dean of Instruction in 2000. 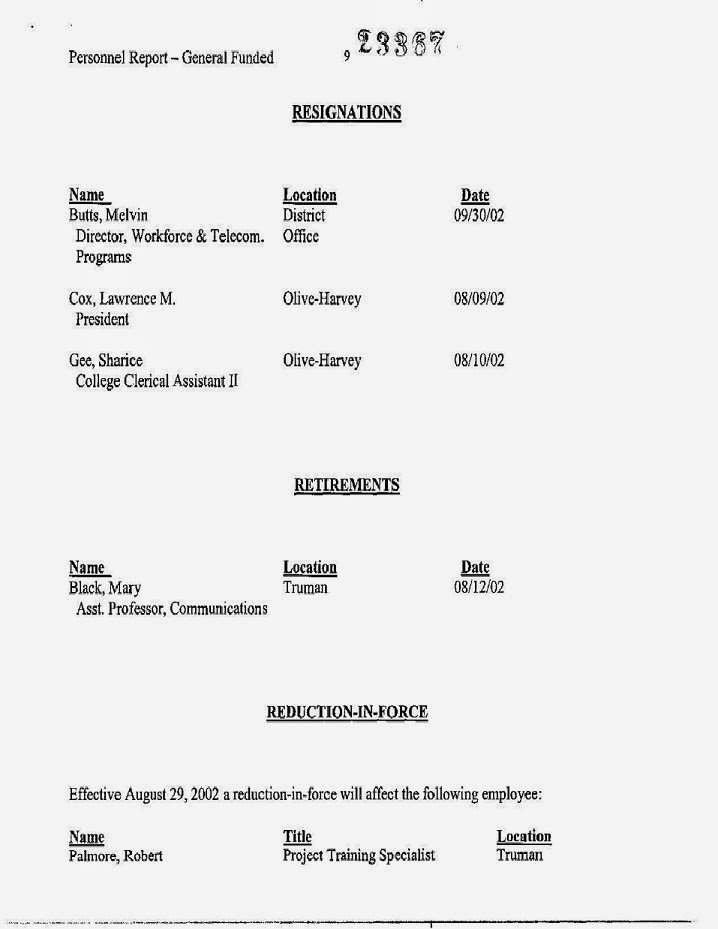 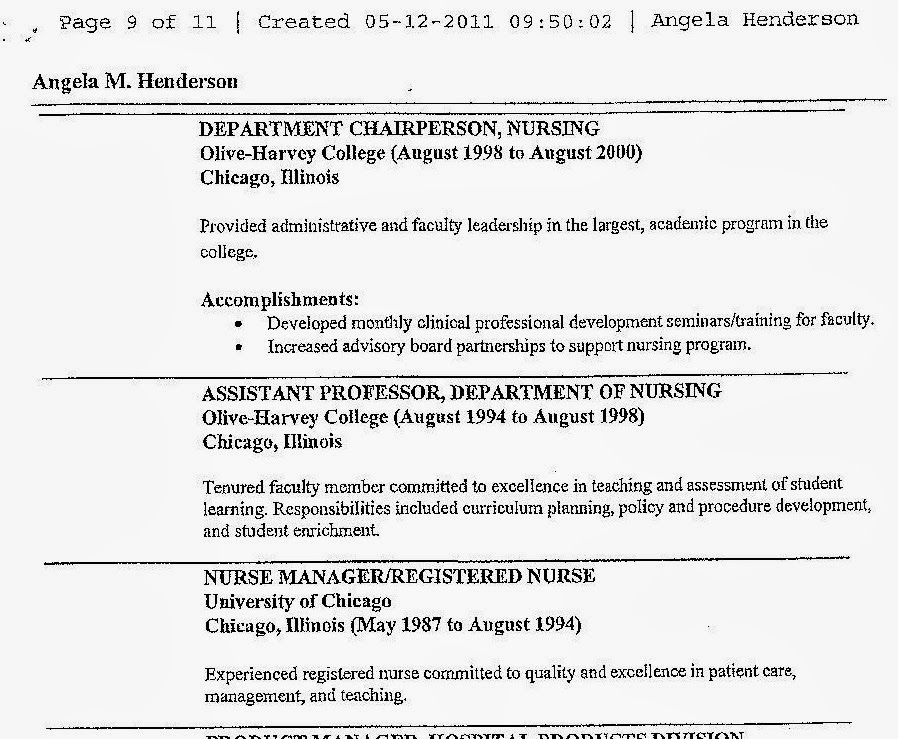 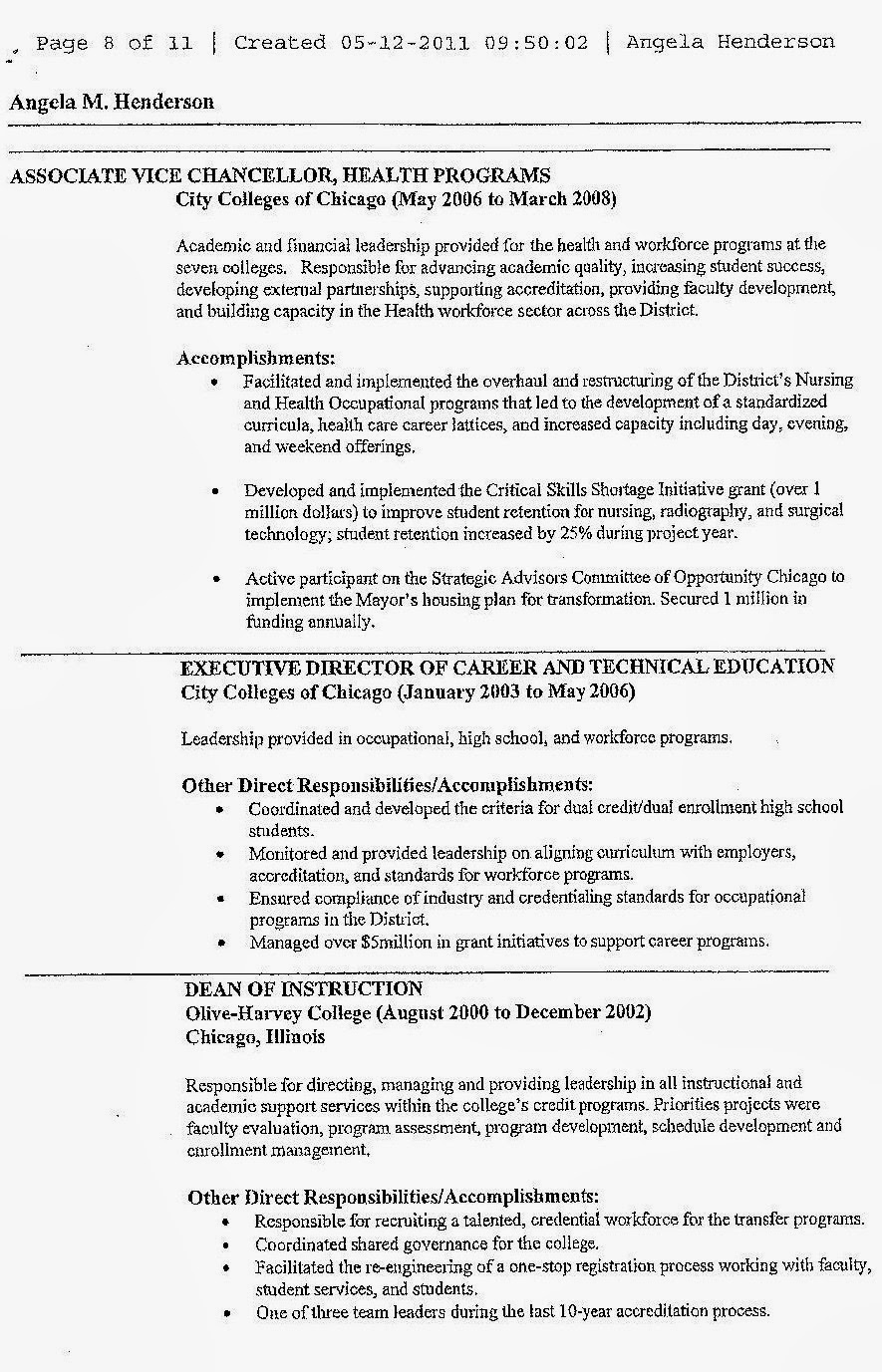 The above document is where the main problem inherent in Henderson's resume surfaces. Following Cox's resignation, the new interim president of Olive Harvey demoted Henderson back to teaching and cut her pay from over $77,000 to just over $52,000. She worked as faculty from August 2002 until January 2003, when Wayne Watson apparently rescued her by extricating her from her predicament at Olive Harvey and transferring her to the District Office, in the process restoring virtually her entire pay cut. However, this is not reflected on Henderson's 2011 resume as it details a seamless period of employment as the Dean of Instruction at Olive Harvey until December 2002 when she moved to the District Office. Her omission of that salient experiential fact is simply a lie. After leaving Olive Harvey, Henderson never again worked anywhere but the District Office. The following documents from the City Colleges of Chicago Board Reports detail the changes made at Olive Harvey, Henderson's (Starks's) demotion and subsequent promotion. Charles A. Green, the new interim president of Olive Harvey, either had no desire to retain Henderson in her administrative position or Henderson chose not to continue working under Green. 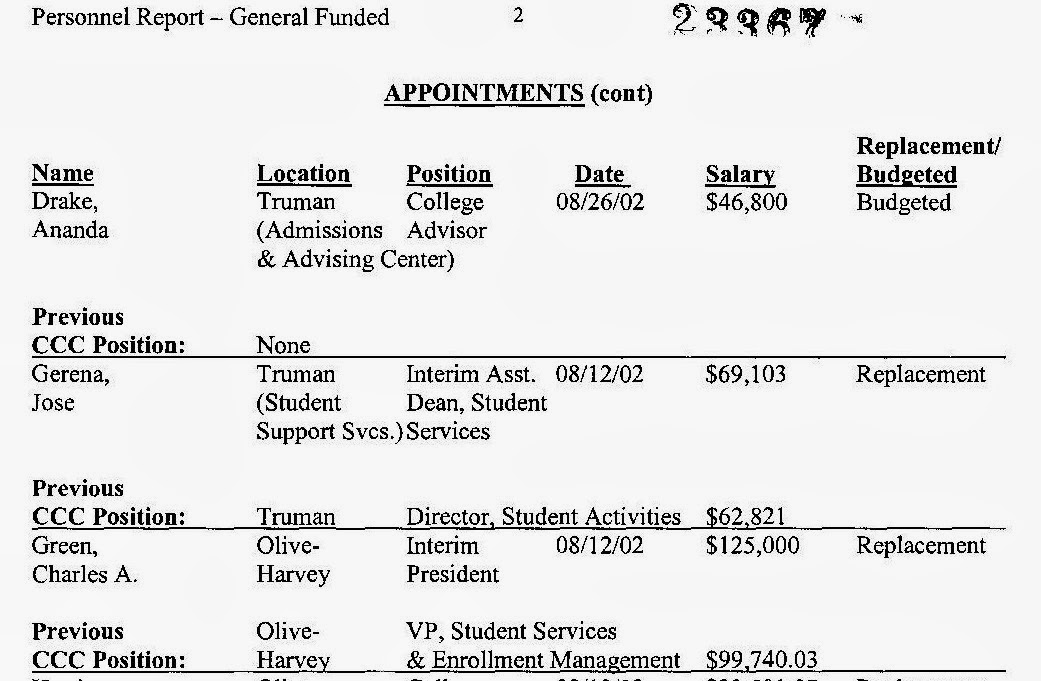 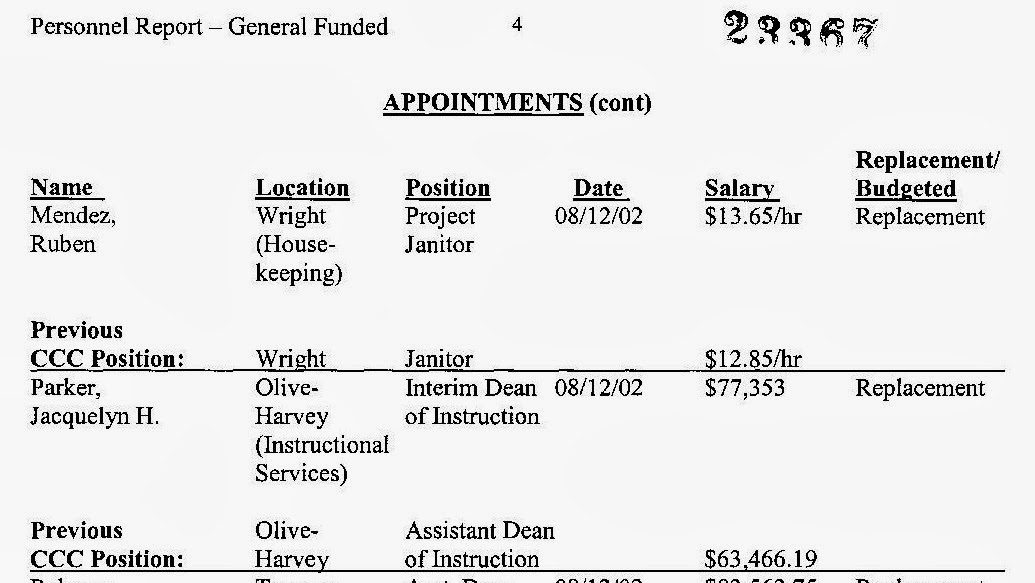 This document shows Angela Starks's (Henderson's) status change from Dean of Instruction at Olive Harvey to full-time faculty, a change that can only be viewed as a demotion, whether voluntary or involuntary. The status change included a salary reduction of nearly $25,000 per year. 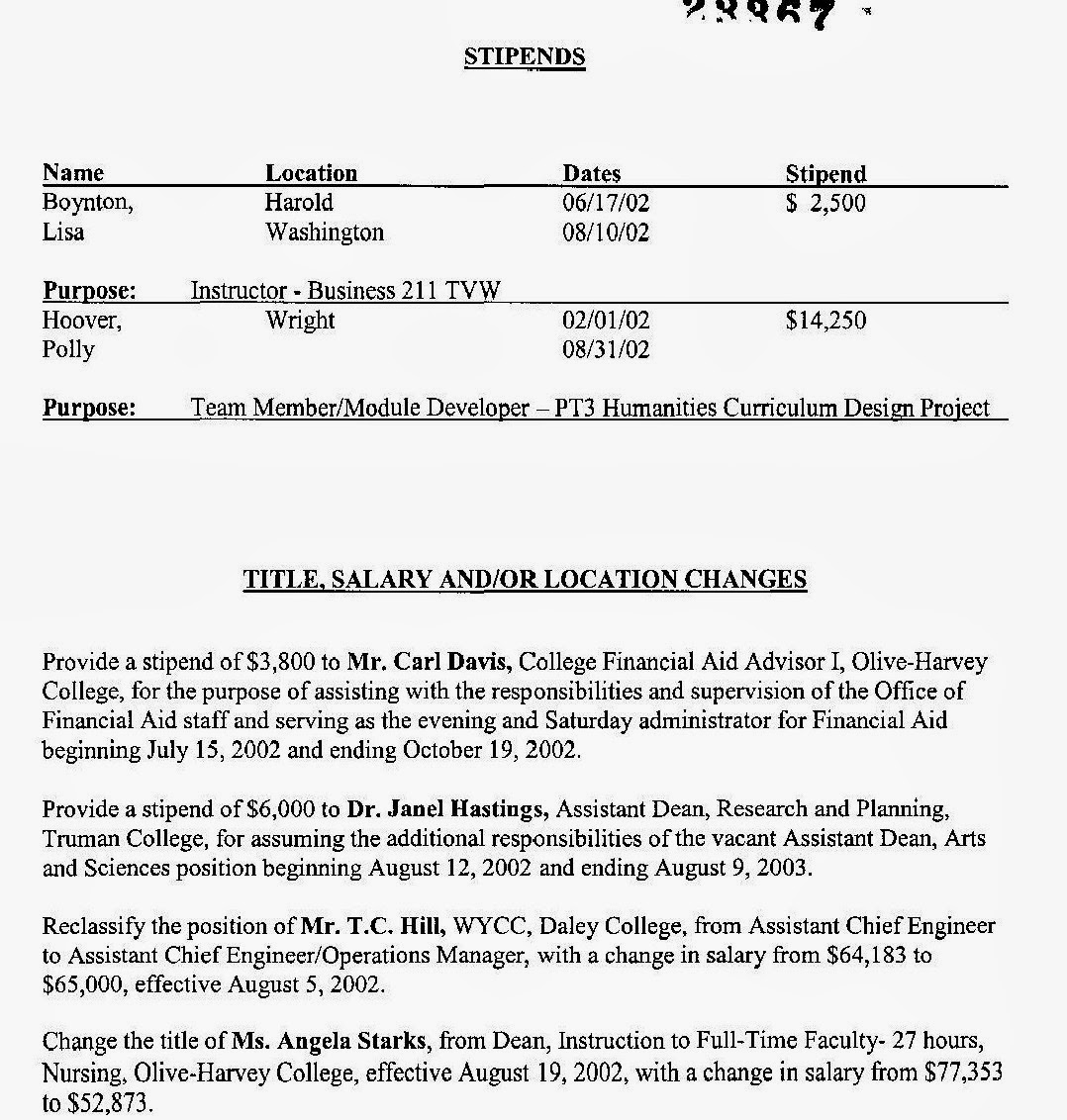 Fortunately, Wayne Watson soon made Henderson whole by transferring her to the District Office as the Executive Director of Career and Technical Education, at nearly the same salary she had received as the Dean of Instruction: $77,250. 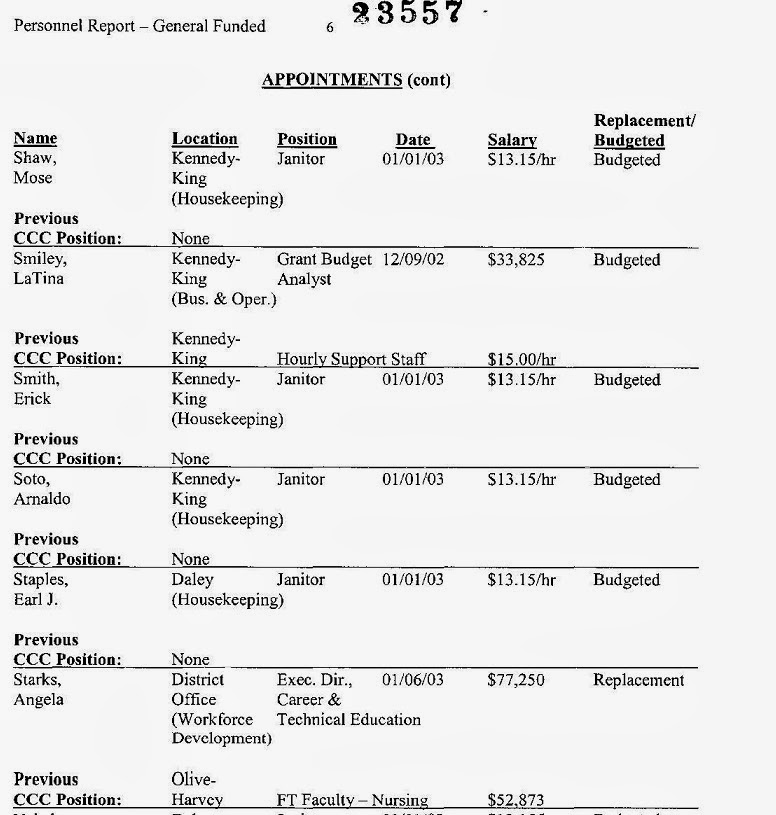 In contrast to the case of Cheri Sidney and her bald-faced falsehoods, Henderson's lies were more subtle, implying that her Ph.D. was imminent, omitting a rather important break in her job chronology. Nonetheless, these actions can be construed as deceptive: in other words, lies. All documentary evidence cited in this post comes from the registrar at the University of Illinois at Chicago, Chicago State via FOIA requests or from the City Colleges of Chicago Board Reports online.
Posted by Robert Bionaz at 7:10 AM