Clumsiness and Cowardice in the Cook Building

The most recent attempt by our administration to crush dissent at Chicago State seems to have been rather poorly conceived. One caustic article concludes with this paragraph:

“Obviously the school and its lead counsel habitually attempt to stifle criticism. Of course, each attempted shutdown usually results in more critical speech. Not only are its actions counterproductive, they're counter-intuitive. Rather than let criticism flow by, indistinguishable from the millions of other angry voices flowing across the internet, the school has called attention to this blog, upping its readership and further spreading the negative portrayal of the school and its administration. And it's done it in the clumsiest, most cowardly fashion -- by wielding intellectual property as a weapon.”

Let’s just call this whole uproar over faculty “incivility” what it is: another attempt by Wayne Watson and Chicago State's administration to stifle dissent. Wayne Watson and his administrative flunkies are unable to refute the fact-based substance of the posts on this blog. Thus, they must resort to a cynical three-pronged defense strategy: threaten their critics with legal action for "trademark infringement," imply that discipline could result for their critics because of their violation of "the University's policies requiring civility and professionalism of all university faculty members," and caution members of the university community not "to air our dirty linen in public." Given the numerous examples of the uncivil behavior displayed by the Watson administration over the past four years, Watson's current concerns about faculty incivility likely stem from simple self-preservation. If no one looks into his behavior, if no one exposes it publicly, he can continue to abuse various university policies and degrade the university's academic reputation with impunity.

An instructive example of how Watson behaves when he faces sustainable allegations of misconduct occurred in February and March 2013, during the struggle over his potential dismissal as Chicago State's president. In the late February draft of a letter he ultimately sent to the Board of Trustees, Watson creates a world in which he is the victim, in which a number of persons are conspiring against him, and in which any kind of attacks against his opponents are appropriate. Watson's letter mixes innuendo, lies and obsequity into a set of accusations that appear in a document that should be beneath the dignity of anyone serving as the president of a university. However, his letter provides an example of the incivility and intellectual and ethical bankruptcy of its author.

At that time, Watson was desperately fighting to keep his job. Cowering behind his attorney, Emil Jones and his political allies, Watson sent a letter to the board detailing a number of unsubstantiated charges against those he considered his primary enemies: Gary Rozier, Chairman of the Board of Trustees, “Z” Scott, Vice-Chairman of the Board, Sandra Westbrooks, then Provost and the interim president named to succeed Watson, and Faculty Senate President Phillip Beverly.

Watson was under fire for, among other things, an improper relationship with another university employee, Cheri Sidney; an employee for whom Watson could and did make decisions regarding her hiring, salary and advancement. This relationship violates Chicago State policy as the university's Human Resources Policy Manual clearly indicates:

Wayne Watson begins his letter with a discussion of his improper relationship. His first two paragraphs miss the entire point of the Chicago State policy as he invokes the first amendment as affording him the right to associate with anyone he chooses. Of course, no one cares about his relationships, the only concern is the impropriety of giving highly-paid administrative positions to your friends. Documents previously posted on this blog contradict Watson's self-serving claim that "no employee has received any unearned benefits based on their friendship with me."

His next paragraph provides an overview of his primary strategy: attack the persons he perceives as most responsible for his predicament. Watson notes that Patrick Cage is in possession of information the board needs to know:

Watson then commences his attack on Gary Rozier and "Z" Scott by offering allegations based on e-mails which are not included with the letter in my possession. Because these are unsubstantiated allegations, the following excerpts have the names of persons still working at Chicago State redacted. 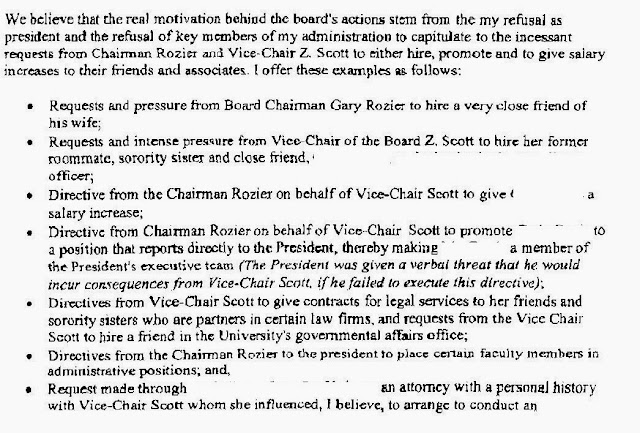 Watson then moves on to his charges against then Provost Sandra Westbrooks (these are doubtful accusations and the most incendiary allegation is reacted): 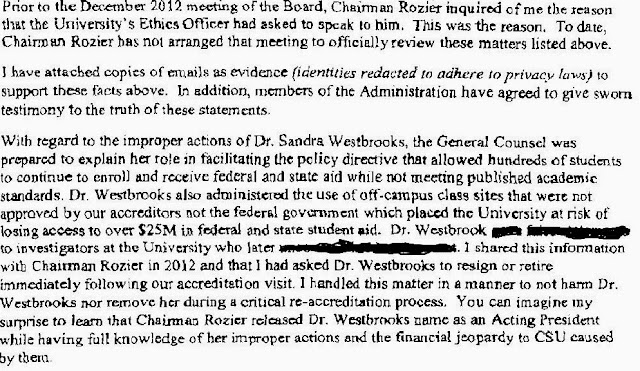 This is nothing more than a parade of cynical, self-serving accusations. In fact, the Provost's Office is not responsible for financial aid, Watson's friends in Enrollment Management are. What did Watson do when he discovered Westbrook's "improper actions"? By his own admission, he covered them up. He allowed Wesbrooks to continue in her position until the conclusion of "a critical re-accreditation process." Of course, Watson neglected to mention the 20 percent salary increase he bestowed upon Westbrooks in late 2012, several months before he decided she was "conspiring" against him.

However, Watson saves his most virulent invective for Faculty Senate President Phillip Beverly. The passage speaks for itself and I have again redacted the most problematic (and totally unsupported) accusations made by Watson:

Although Watson claimed the existence of an ongoing "investigation," no one from the university ever contacted Beverly about any of Watson's allegations. Who did this investigation? While the university does not seem to have a blanket policy on personnel investigations, its policy on EEO complaints includes an early notification of the alleged offender of the nature of the charges and protects the subject's due process rights. In the case of Phillip Beverly, however, Wayne Watson apparently feels that following any kind of procedure is unnecessary. This raises the question of whether this investigation is still ongoing some eight months later.

Ultimately, Watson determined that each of the four persons he attacked had ulterior motives for wanting him removed as president. For Rozier and Scott, they desired to ensure that their friends and associates could obtain jobs at Chicago State. Of course, in Wayne Watson's fanciful account, he staunchly resisted this attempt to use Chicago State as a patronage dumping round. Westbrooks was simply angling for his job and Beverly wanted to stop administrative inquiries into his improper behavior, while at the same time strong-arming 28 weak-minded members of the Faculty Senate into a no-confidence vote against Watson. In order to make this ridiculous assertion, Watson had to resort to the bald-faced lie that "some" of the 28 faculty had "been denied tenure."

Rather than attempt to make his case for retention as Chicago State's president on its merits, Watson resorted to conspiratorial thinking, hiding behind his representatives, depending upon one of his political patrons to gin up support for his presidency, personal attacks on the integrity of several persons and outright lies as rationales for continuing as the "leader" of this institution.
Posted by Robert Bionaz at 5:47 AM