The Higher Learning Commmission Wakes Up: Who is it Protecting?

If you thought the recent administrative and Board changes would insulate the University against the kind of sleazy political moves we’ve seen over the past several years, think again. This time, however, it looks like the attack on Chicago State comes from an unexpected source: the Higher Learning Commission (HLC), one of our accrediting bodies.

What is the HLC and what are its principles? First, it describes itself as “an independent corporation that was founded in 1895 as one of six regional institutional accreditors in the United States.” Here are some excerpts from its “Guiding Values”: “The responsibility for assuring the quality of an institution rests first with the institution itself”; and, “Continuous improvement is the alternative to stagnation”; and “Integrity means doing what the mission calls for and not doing what it does not call for; governance systems that are freely, independently and rigorously focused on the welfare of the institution and its students; scrupulous avoidance of misleading statements or practices”; and, “The well-being of an institution requires that its governing board place that well-being above the interests of its own members and the interests of any other entity”; and, HLC “holds the governing board of an institution accountable for the key aspects of the institution’s operations. [the Board] . . . must . . . hold itself independent of undue influence from individuals, be they donors, elected officials, supporters of athletics, shareholders, or others with personal or political interests.” How did HLC do over the past several years? As the Watson administration ran the institution into the ground while saddling it with a pack of incompetent cronies and other hacks, HLC stood by and did nothing. In fact, it essentially endorsed the corruption and malfeasance going on at Chicago State.
https://www.hlcommission.org/About-HLC/about-hlc.html
https://www.hlcommission.org/Publications/guiding-values.html

Thanks to the previous Board’s stupid decision in February 2016 to declare “financial exigency,” on July 11, 2016, the HLC put Chicago State “on notice” for its financial instability. The July notice included this: “The Board will review the Assurance Review documents at its June 2017 meeting or thereafter to determine whether the institution has demonstrated that it is no longer at risk for non-compliance.” The accrediting criteria cited in the July 2016 report included 5.A. “The institution’s resource base supports its current educational programs and its plans for maintaining and strengthening their quality in the future”; and 5.C. “The institution engages in systematic and integrated planning.” The HLC concerns about 5.A. stemmed from the state’s budget impasse. Its concerns about 5.C. revolved around the University’s failure to sufficiently clarify “roles among its Management Action Committee, the University Advisory Committee and the University Budget Committee to optimize the decision-making process”; its failure to create a long-term plan for “student recruitment and retention”; and “While the HLC evaluation team expressed strong confidence in the leadership of the University’s new President (Thomas Calhoun),” it noted that “there has been high turnover in recent years, and many key staff members are relatively new.”

Believing the July 10, 2017 communication to be a public document, I made a Freedom of Information Act request to the Illinois Board of Higher Education (IBHE) for a copy of the letter. On July 20, I received a denial of my request from Karen Helland. IBHE claimed that “The HLC has conveyed to me that the information is pre-decisional because the HLC Board has made no final decision regarding Chicago State University. Thus, the letter is subject to confidentiality. Pursuant to Section 7(1)(g) of the Illinois Freedom of Information Act (FOIA), the letter is considered confidential and was submitted to IBHE, a third party, under an express promise that it will be kept confidential.” Given the information in this letter, I guess the HLC does not want to do its business in the open. Obviously, I plan to appeal this denial to the Public Access Counselor, we’ll see if the claimed exemption (which deals with the confidentiality of “trade secrets and commercial or financial information”) is a valid basis for denial.

Since the University is already “on notice,” a very public status, why is HLC so concerned about the confidentiality of this letter? Our financial position has clearly improved, the abominable Management Action and University Advisory Committees expired with the end of “financial exigency,” and turnover now results from the new administration’s completely appropriate effort to terminate senior administrators who are responsible for the multiple failures of the past seven years. I am told that we remain “on notice” and must submit another report to HLC in early August. Again, why? Here’s my interpretation: Certain members of the HLC apparently desire to insure that the University remains a political patronage pit. In order to do that, it is necessary to retain a number of Watson holdovers and engage in delaying tactics in an attempt to protect them. The new Board and our current administration represent a threat to that status quo and must be neutralized. Although the July 11, 2016 letter from HLC endorsed President Calhoun’s leadership, as we all know, a concerted back-stabbing effort by senior administrators and Board members ultimately resulted in his firing. The new Board is apparently not going to be receptive to that kind of activity. As a result of the new Board’s concern for the well-being of the University, it seems that playing Russian Roulette with our accreditation is the only remaining way to protect the failed Watson holdovers.

Here's something sent out today by the Democratic State Comptroller. Things look a little different when you have a budget. By the way, how exactly was this a win for Bruce Rauner? 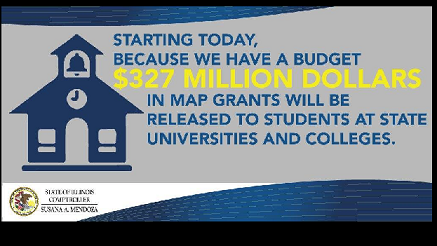 Posted by Robert Bionaz at 4:47 PM No comments:

Illinois Finally Has a Budget!

The House has just overriden Rauner's veto. After two years, Illinois has a budget.
Posted by Robert Bionaz at 4:37 PM No comments: