Is Another Palace Revolt in the Offing? Rumors Abound

Back in the days of Thomas Calhoun's presidency, a coterie of senior administrators: Patrick Cage, Renee Mitchell, Cecil Lucy, and Angela Henderson prominent among them, reportedly worked assiduously to undermine Dr. Calhoun with a sympathetic Board that included Nikki Zollar, Anthony Young, and Marshall Hatch. Eventually, this sleazy effort succeeded as Zollar, Young, and Hatch led an about-face by the Board which the other members, Joseph Smith, Michael Curtin, James Joyce, and Spencer Leak endorsed. The only person on the Board to speak out against the railroading of the President? The student trustee Paris Griffin. With the appointment of Cecil Lucy to replace Dr. Calhoun, the Board effectively returned Chicago State to the control of Wayne Watson. The results speak for themselves. More scandals, further enrollment declines, and ultimately a university close to extinction.

The anniversary of that disgraceful, back-stabbing Board action is approaching. On September 16, it will be one year since the raucous meeting at which the Board betrayed the University. As we begin another academic year, I am hearing rumors of another attempt by Henderson and her diminished number of cronies to discredit another university president. This time the target is Dr. Rachel Lindsey. Although the new Board includes three new members, two of the participants in that 2016 debacle remain on the Board, Horace Smith and Marshall Hatch. We now have a new student trustee. Once again, I understand that dissident administrators are appealing to the Board, this time possibly through an outside intermediary, to remove Dr. Lindsey and keep Henderson. Will the Board again enable persons whose sole concern is for their own welfare, not the university's? whose performance for years has been abominable and destructive? whose dishonesty has been exposed numerous times? Will the Board enable persons who have no support from any segment of the university (remember the 116-1 no confidence vote last spring against Henderson)? Will the Board again champion the interests of the few over the interests of the many? Will the Board stand up for Chicago State University? We'll see.

My advice to Dr. Lindsey is this: Fire the Provost. Fire her cronies. Pull us out of this mess and give the University a fighting chance.

Is the War Against the CSU Faculty Over? Don’t Hold Your Breath. The UPI explains the recent arbitration. 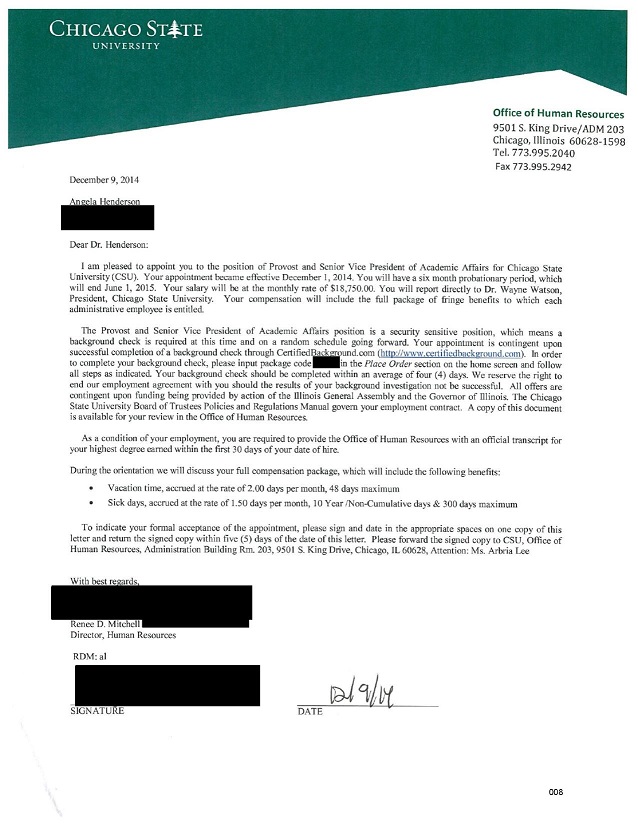 
Posted by Robert Bionaz at 6:45 PM No comments: