"You may not be able to change the world, but at least you can embarrass the guilty."

“You never get a second chance to make a first impression.” Quote from numerous advertising slogans, original source unknown.

Chicago State continues to hemorrhage students. The grim enrollment statistics tell the story; students do not enroll here and a large number of the students who are enrolled do not stay here. In this post, I will explore the role played in our enrollment difficulties by the university’s web site. In my estimation, a look at the site is likely to leave an imaginary prospective student with one of the following impressions that lead to one important question: 1) the articles on the school’s web site are often replete with basic errors in grammar and style. If the university presents itself in such a sloppy and unprofessional way, is it a school I want to attend? 2) I do not see much about students, faculty or programs. In fact, the web site seems to exist to trumpet the achievements and activities of a variety of administrators (particularly Wayne Watson). Since the school chooses not to advertise its academic strengths, maybe it does not have any. Again, is it a school I want to attend? Based on the enrollment declines Chicago State has experienced, the answer seems to be a resounding no.

Here is what that imaginary prospective student looking at the web site for the first time would see this morning: 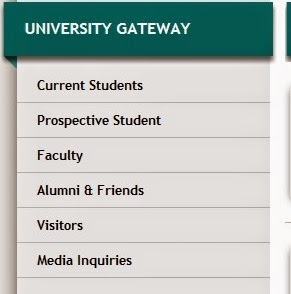 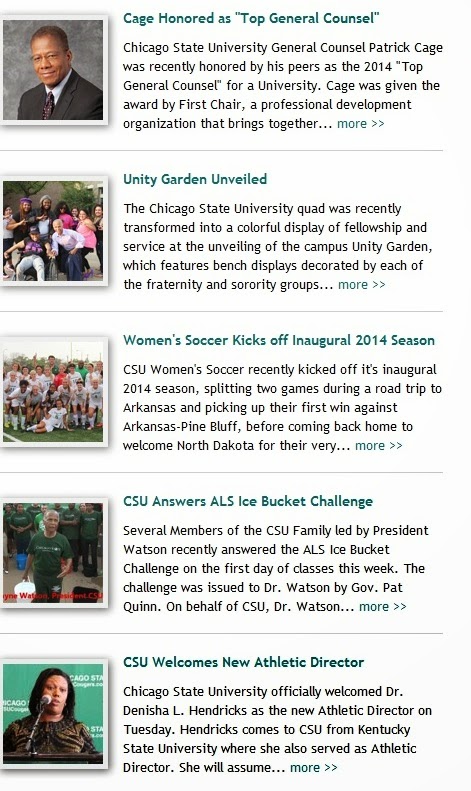 As you can see, under the “University Gateway,” the “s” is missing from what clearly should be the plural of “student.” The blurb on Chicago State’s “Women’s Soccer” (no team, just “Women’s Soccer”) uses the contraction “it’s” rather than the possessive, “its.” Four of the five “news” stories prominently feature administrators: Wayne Watson, Patrick Cage and Denisha Hendricks, the new Athletic Director. Who are these people? If our imaginary student further peruses articles on the web site, s/he will find more sloppy and unprofessional writing. Problems with punctuation, oddly placed dependent clauses and insipid passive constructions plague several articles.

Going deeper into the Chicago State web site, the imaginary student soon realizes that of the ten most recent news articles, seven feature picture(s) of Wayne Watson and/or quotations by Wayne Watson. Now the student becomes curious and googles Wayne Watson and Chicago State University. The Wikipedia article on Chicago State says that the school has accreditation, that’s good, but it also says that the school’s provost might have plagiarized her dissertation and that “under Watson’s tenure” the school has been named as a defendant in “several high profile lawsuits,” one of which resulted in a multi-million dollar loss. Oh my, that’s not so good. 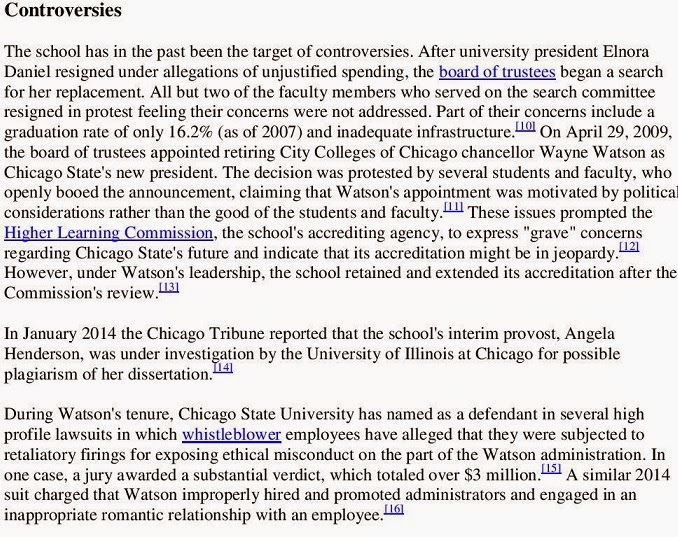 The imaginary student finds the lead article on the web site really baffling. What does an award for being a “Top General Counsel” mean exactly? What is a “General Counsel”? The student dutifully googles Patrick Cage and finds a number of entries, none of them flattering. He has made several attempts to stifle dissent at Chicago State, he does not know the difference between “tenants” and “tenets,” he was heavily involved in egregious and apparently discriminatory employment actions that resulted in the multi-million dollar lawsuit against the school. Why would anyone give this guy an award?

Finally our imaginary student decides s/he has seen enough. Chicago State is not the place to go.

Frankly, this fictional account is a somewhat mediocre attempt to express my frustrations with a university gateway that is often amateurish, sometimes illiterate and always a narcissistic celebration of various administrators. Does any prospective student give a damn about an award to Patrick Cage? Does anyone care about Wayne Watson? Are either of these two guys going to be a magnet for potential students? Is there nothing else on this campus to talk about?

In my estimation, a university web site should be a polished, professional representation of the school. However, our web site is an embarrassment. No one writes perfect prose but the university web site is not some web blog or casual opinion site. The written material that appears on our web pages should be scrupulously edited. It is not like listening to Watson’s extemporaneous ramblings—always turgid, pedantic and inarticulate. The written stuff must be correct when it finally appears. No viable university site should produce the kind of horrific written material that appears on Chicago State’s web pages. If the articles on the web site look plain dumb, we all look stupid. In the same vein, if the university does not possess sufficient self-respect to ensure that its public pronouncements are as articulate as possible, what conclusions is the reader likely to draw?

From a tactical standpoint, I find the web page focus on Wayne Watson and other top administrators unfathomable. Watson has been the cause of a variety of public relations disasters. Only weeks after the judge in the Crowley case called him a liar, only weeks after the court affirmed the huge award against Watson and the university, our school prominently features him on the website? Similarly, our public relations folks make their lead web page story about the attorney who has brought nothing but public scorn down on the university? I realize that there seems to be an eerie serendipitous relationship in the timing of negative press coverage and awards given to our administrators, but enough is enough. What are we to expect next? Perhaps someone could give an award to Angela Henderson for the Nursing “dissertation of the year”? How about a guest appearance by Elnora Daniel to talk about how to use your credit cards responsibly? Or maybe Dolores Cross could write an article about how to handle federal financial aid money? The more Chicago State’s web site focuses on the school’s administrators, the wider the disjuncture between fantasy and reality becomes.

The people responsible for Chicago State’s public image receive nice salaries for their efforts. I do not think it is too much to ask that they produce material that is reasonably articulate and thoroughly professional. If there is no one in the administration capable of writing a simple declarative sentence, perhaps we could find someone. For goodness sake, have someone edit your stuff so it does not embarrass us all. Finally, I humbly suggest that our public relations people eliminate the constant references to persons who have brought the university into such disrepute. We apparently cannot do much to end the putrid Watson regime. Nonetheless, we can change the public face of the university. Our survival might just depend on it.