A Note to our Deans, Chairs, and "Silent" Faculty: The Enrollment Numbers for the Fall Look Dismal, Wayne Watson Scams the Rubes.

As we begin another semester, many of you have doubtless noticed the ease in finding a parking space in the various university lots. Could this mean our enrollment is down again? If we go back to the May 9, 2014, Board of Trustees meeting, we find that the enrollment report puts a positive spin on the school’s future enrollment level. Often, the kingdom of Enrollment Management sends out a sacrificial lamb to the board meetings since the top administrators seem too busy to attend. This time, Latrice Eggleston of IER delivered the happy news. Of course, the credulous (to be charitable) board members accepted the report with nary a substantive question.

The highlights of the report: 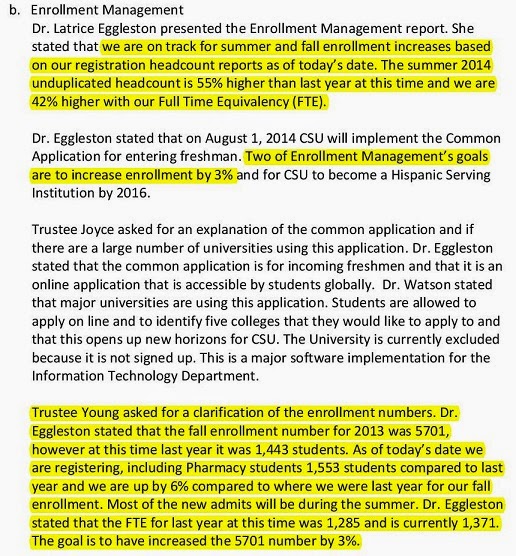 Of course, Wayne Watson took the opportunity to blow his own horn:

Given this good news, we can expect enrollment for Fall 2014 to reach around 5900 (5872 would be a 3 percent increase), a nice turnaround from the dreadful decline we have seen every year since Fall 2010. However, any claims by the administration that they’re turning the enrollment catastrophe around must be viewed with skepticism. In fact, the Watson administration’s enrollment projections are completely wrong. But Watson’s big con covers up his failings (again) in that area and gives that ridiculous board the cover it needs to look the other way while it continually issues mindless statements of support—ignoring mountains of evidence detailing Watson’s colossal failure. These are the current enrollment facts:

As of Wednesday, September 3, 2014, Chicago State’s enrollment totaled 5011, a decrease of 499 students from September 3, 2013, and a decrease of 690 students from the final total of 5701 students in Fall 2013. These figures translate into a drop of 9.1 percent from the previous year and a drop of 12.1 percent from the final Fall enrollment totals. Registration for the regular session is over and the special session begins September 15. Using last year’s statistics, the enrollment change from September 3, 2013 to September 27, 2013 (the official ten-day count) was an increase of 191 students. A similar increase this year will bring the final Fall enrollment to 5202. Unless the university embarks on a concerted campaign to register students in local graveyards, it seems unlikely that the enrollment will move that much, although it is possible. Most alarming, enrollments are down in every category: undergraduate, down 10%, graduate, down 7%, certificate, down 37%, pharmacy, down 3%, doctoral, down 16%. Given these dismal numbers, I expect that our enrollment will decrease between 8 and 9 percent this fall.

If our enrollment decreases to 5200, that represents a loss of 2162 students since Fall 2010, or 29.4 percent. Frankly, anyone familiar with Wayne Watson’s performance as City Colleges Chancellor then Chicago State President would expect nothing less. In the last 8 years of “leadership” at City Colleges, the system saw its enrollment decline every year but one; Watson’s final year when the system increased by 83 students. At Chicago State in 2009-10, the enrollment increased from 7235 to 7362 in Fall 2010, an increase of 127 students. Overall, during Watson’s tenure at City Colleges, the system shed 27,356 students. Added to the estimated 2162 who have fled Chicago State during Watson’s tenure, he is responsible for an aggregate drop of 29,518 students at two different institutions. The fact that any board allows this man to continue to wreak havoc on higher education is a testimony to the unfitness of the members of those boards. How many times can you listen to the same nonsense before you realize something must be done? Apparently indefinitely. Of course, you tenured faculty who think you can hole up in your offices while this passes can choose to believe the administration. After all, maybe the school will gain nearly 900 additional students in the next week.

Perhaps someone in a position to do something about the continued dishonest farce playing out at Chicago State should take note. Perhaps the members of the Chicago State "family" who have done so much to further the interests of this disgraceful administration should also take note.