There is a certain consistency in Wayne Watson’s response to challenges to his authority. As he said before he even started at Chicago State, he likes to fire people. Apparently however, he often finds that exercise of power insufficient to satisfy his seeming insatiable appetite for vengeance. As the judge in the James Crowley case observed, Watson and his administration were not simply after victory in the court case, they wanted to “crush” Crowley. After firing him, forcing Crowley to exhaust his savings and dip into his retirement to live, Wayne Watson and Patrick Cage saw fit to report Crowley to the ARDC which resulted in difficulties for Crowley in securing employment after Chicago State terminated him. Now Willie Preston is the victim of Watson’s vengeance—as the full weight of the state is arrayed against him, Chicago State attempts to destroy him.

Before moving on to Willie Preston’s predicament, some background information seems important. Crowley’s case is not the first time Watson has attempted to “crush” an employee. While at City Colleges, Watson found himself the target of a lawsuit filed by Maria Moore. Eventually, City Colleges decided to settle the matter in favor of Moore, a decision that likely cost them millions of dollars in damages (plus Moore’s attorney fees). Sounds familiar no? Also familiar are the circumstances giving rise to lawsuit and the behavior of Watson, acting like a two-bit goon, just as he did in the Crowley case.

Although reports on the Crowley verdict call the case a “landmark” decision, the 2011 settlement between City Colleges and Maria Moore also reveals Watson losing millions of dollars in a whistleblower case, albeit one apparently containing a non-disclosure agreement and sealed evidence. Thus, after the lawsuit made the news in 2009 (the filing date was July 24), it basically disappeared from the public view. Here, I will publish some of the relevant excerpts from both the complaint and the opinion by a Federal judge that destroyed Watson’s defense and forced City Colleges to settle the suit.

The contours of the Moore suit are familiar also. As he did with Crowley, Watson ordered Moore to violate the law, in this case by making videos with public funds for Watson’s friends and political cronies. When Moore went to the OEIG’s office, Watson harassed her then fired her (as he did with Crowley). In 2011, Moore won the case and a large settlement (as has Crowley). Here is Moore’s complaint with its numerous allegations, all supported by her victory. These documents show Watson, with a complicit Board of Trustees refusing to do anything, ordering Moore to break the law, threatening her then firing her. 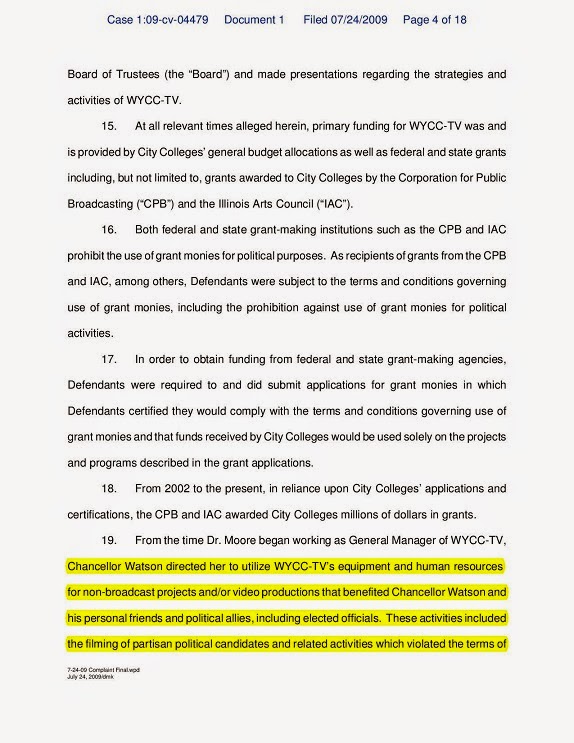 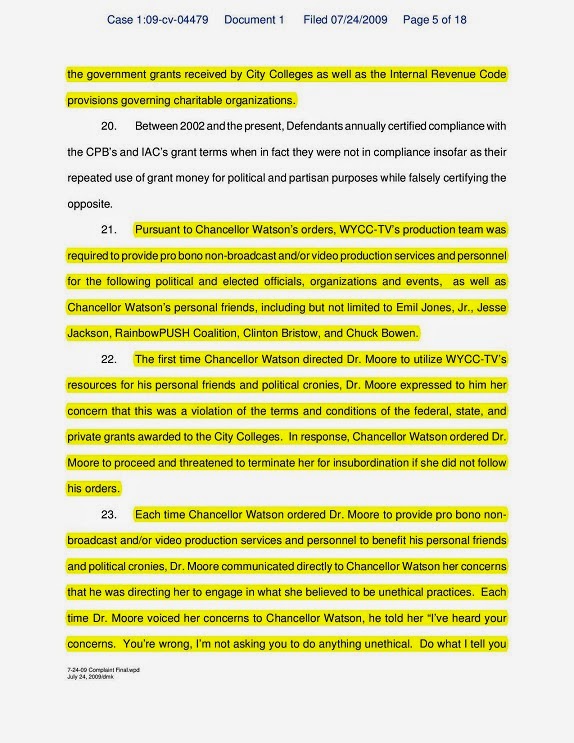 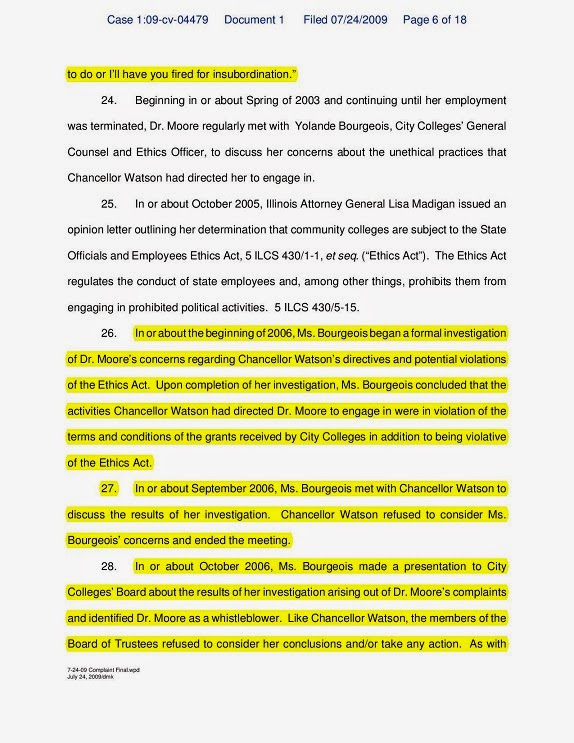 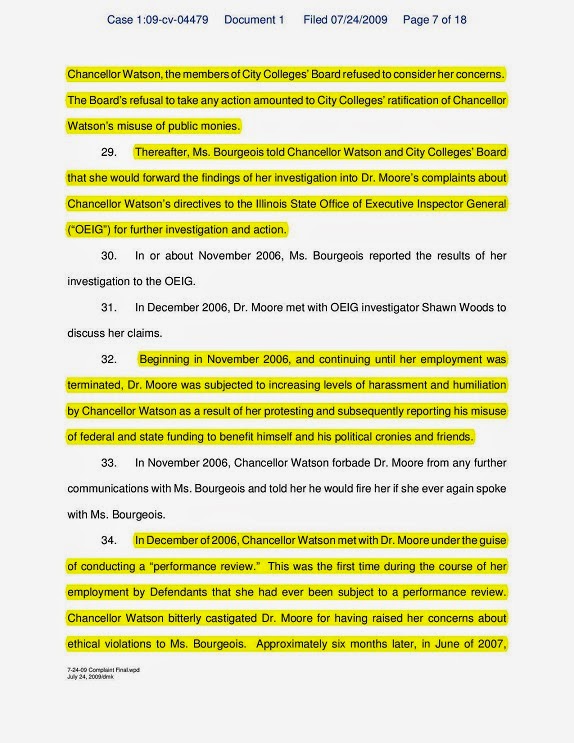 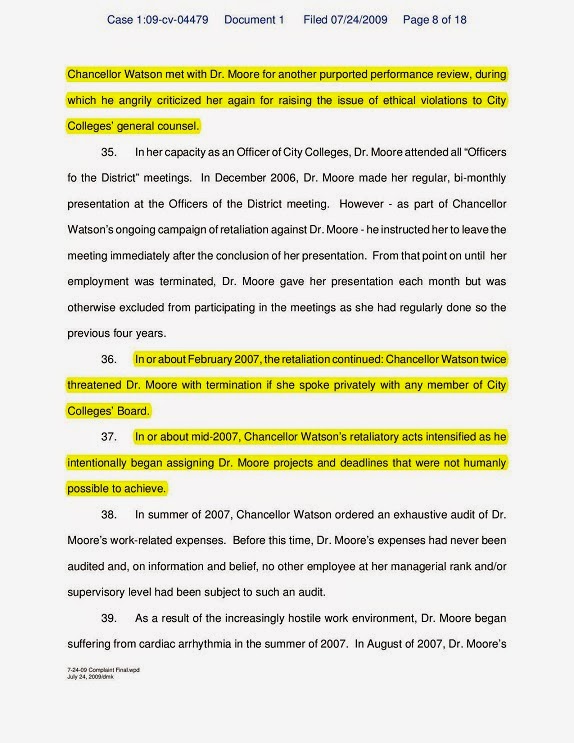 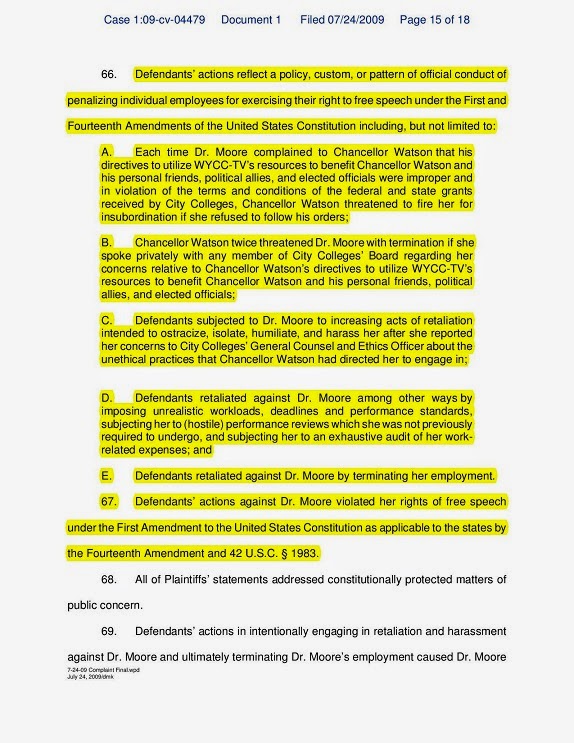 Maria Moore was not the only victim of Watson’s harassment. Yolande Bourgeois, then the Ethics Officer at City Colleges, now a Cook County Circuit Court Judge, also suffered at the hands of the “Chancellor.” An opinion rendered by Martin Ashman on November 8, 2010, provides validation of Moore's claims as well as a glimpse into Bourgeois's experiences with Watson.

Watson's retaliation against Crowley, Moore and Bourgeois provide a behavioral pattern that is hard to ignore. Anyone who disagrees with a Watson dictum, even one that is illegal, is likely going to pay a price, often a steep one. Currently, Willie Preston is being given the “Watson treatment” by the Illinois Attorney General’s Office, the entity defending Chicago State against the Bailey-Preston lawsuit filed in May of this year. Although the recent response filed on behalf of Chicago State comes from the AG’s office, Watson’s influence seems recognizable.

The issue for Willie and Brittany Bailey is the $400 filing fee that the university’s response claims he was able to pay. In the AG’s view, Preston’s request for a waiver of the filing fee constituted “fraud” against the court—according to the AG’s office, claiming poverty when he had raised “thousands of dollars” for his legal defense. According to the response, this should be sufficient to win a dismissal of the case. However, as the defense did in Crowley’s case, they qualified their argument by including an alternative request. In this instance, the alternative involves revoking their “poverty” status and forcing them to bear the entire expense of the legal effort (which they are already doing, minus the $400 filing fee).

Preston’s attorney made clear in an e-mail to the Assistant Attorney General that “These funds that you reference go directly towards the plaintiffs’ legal fees and cannot fairly be construed as income or gifts for them. THE DONATIONS HAVE NOT THUS FAR BEEN . . . SUFFICIENT TO COVER LEGAL COSTS, AND THEY ARE NOT EXPECTED TO BE SUFFICIENT TO COVER FUTURE COSTS.”

The truth is that rather than “thousands of dollars,” the Brittany Bailey-Willie Preston fund currently stands at $1985, with no new donations for nearly three weeks. Given that the total bill for this action will probably be around $10,000, the amount raised so far seems wholly inadequate. Perhaps the judge will rule that the pitiful amount of money raised to this point obligates Brittany and Willie to pay the filing fee. If so, the university can take pride in beating down a young man and woman with family responsibilities, negligible assets and insufficient funds to prosecute an action like this.

Since 2006 when the problems began for Maria Moore, Wayne Watson has tried to victimize Moore, Yolande Bourgeois and James Crowley. Obviously the results have been good for them: Moore and Crowley won huge lawsuits against Watson and Bourgeois realized her goal of becoming a Circuit Court Judge. Brittany Bailey and Willie Preston are certainly more vulnerable than those three persons but given Wayne Watson’s proven propensity for mendacity and vindictiveness, the university’s/AG’s attempt to paint Bailey and Preston as dishonest may well backfire. After all, which of our top-level administrators would you believe? Patrick Cage and Wayne Watson, both of whom found their testimony “impeached” in the Crowley trial, or Angela Henderson, whose problems with truthfulness are on display in both her application materials and her “academic” endeavors?