Anthony Young's Slobbering Obeisance: Wayne Watson is a Man of Great Character--He Who Must Be Obeyed. His Opponents? Degenerates Unworthy of Anything but Contempt

The recent memorandum from the Chicago State University Board of Trustees (which a number of faculty, me and other members of the Faculty Senate included, never received) demonstrates the existence of a curiously inverted power relationship: instead of governing the university, the board serves Wayne Watson. The welfare of the institution, its students, staff and faculty be damned, the board serves Wayne Watson. Listen to the students, staff or faculty? The board only listens to students, staff and faculty who support Wayne Watson and wax enthusiastically about his tremendous leadership. While university boards are supposed to exercise independent oversight, this board includes members with personal and/or political ties to Watson, members who have benefitted financially from their association with Watson and an hapless student trustee who is somewhat unlikely to dissent in any meaningful way. The Chicago State Board is not an independent Board of Trustees which explains many of the seemingly insoluble problems afflicting the university.

Here are some of the key events that support this argument: On November 6, 2012, the Faculty Senate voted no confidence in the president by 28-2 with 2 abstentions. A great deal of evidence of Wayne Watson’s failures as measured by his contractual criteria provided support for this no confidence vote. The Senate President communicated the justification for the vote along with the tally to the Board of Trustees. The members took no notice. The December 14, 2012 Board meeting included no reference to the Senate’s vote. The first reference to the no confidence vote appears in the minutes of the March 1, 2013 meeting, when a faculty member commented on the vote.

After the circus-like meetings of March 1 and 8, 2013, Governor Quinn did not reappoint the board members who apparently wished to discharge Watson. Ultimately, Quinn appointed three new members and the new board’s first meeting on May 17, 2013, resulted in a resounding affirmation of Watson’s presidency: “Trustee Joyce also stated that President Watson has the unanimous support of the Chicago State University (CSU) Board of Trustees.” No more worries about potential investigations or possible dismissal for Wayne Watson.

On September 20, 2013, the new board extended Watson’s contract for two years, through June 30, 2016. In moving to extend Watson’s contract, Anthony Young said: “The present board has expressed its faith and commitment with Dr. Watson. We agree with his vision for the university and support him wholeheartedly.”

On January 14, 2014, the news of Angela Henderson’s dissertation plagiarism provided embarrassment for both Chicago State and the University of Illinois at Chicago. Predictably, Watson took no action against his long-time crony. With the academic integrity of Chicago State riding on their shoulders, on February 11, 2014, the school’s board said this: “The Chicago State University Board of Trustees accepts the PhD conferred on Dr. Angela Henderson by the University of Illinois and the current process being followed. Therefore, the Board supports Dr. Henderson in her role as the Interim Provost and Senior Vice President. The Board also expresses its full confidence in President Watson.”

In May, a number of Chicago State faculty signed an open letter to the board expressing their concern with a number of important issues, particularly the board’s apparent unwillingness to take seriously faculty’s concerns about the the multiple issues plaguing the university. The letter demanded that the board members do something to “save this university from further needless embarrassment and damage.”

A short exchange of letters ensued. The board’s final communication informed the faculty that “it is important to reiterate that the Board supports President Watson and the administration,” and noted the “positive feedback we have received from students, staff, and community stakeholders, as well as several of your colleagues.” The upshot of the board’s letters? Anyone who supports Wayne Watson is always right, anyone who opposes him is always wrong. Here's the faculty's letter to the board on May 7, 2014. 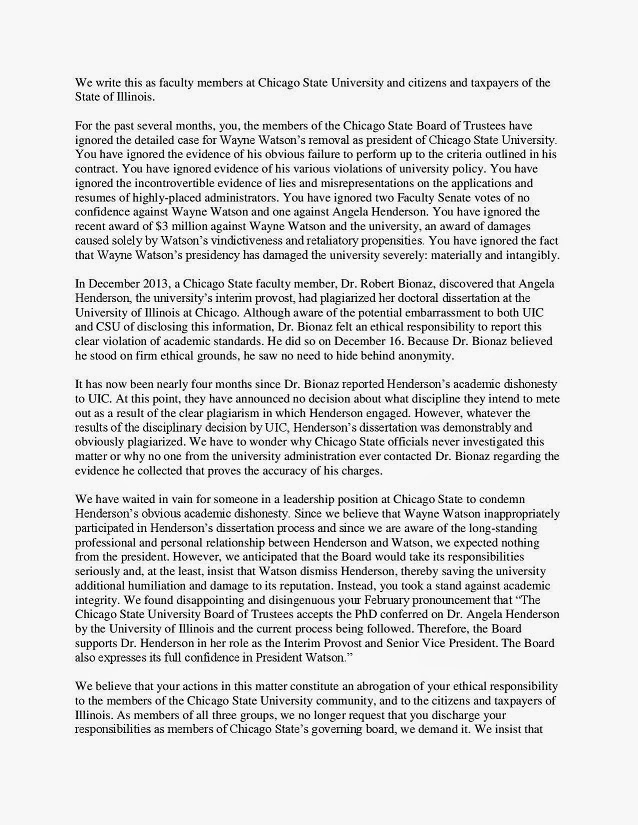 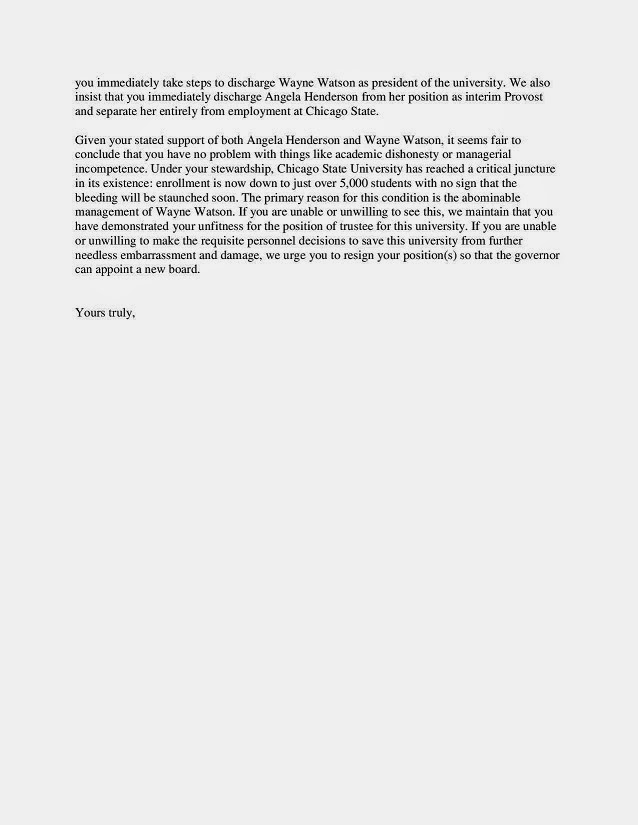 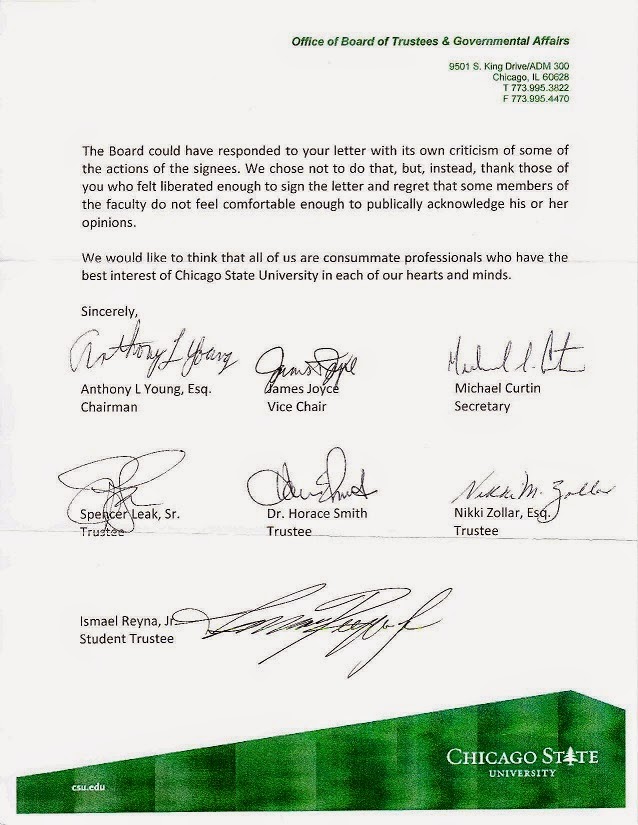 Here's the board's letter of June 27, 2014, telling the dissenting faculty to shut up: 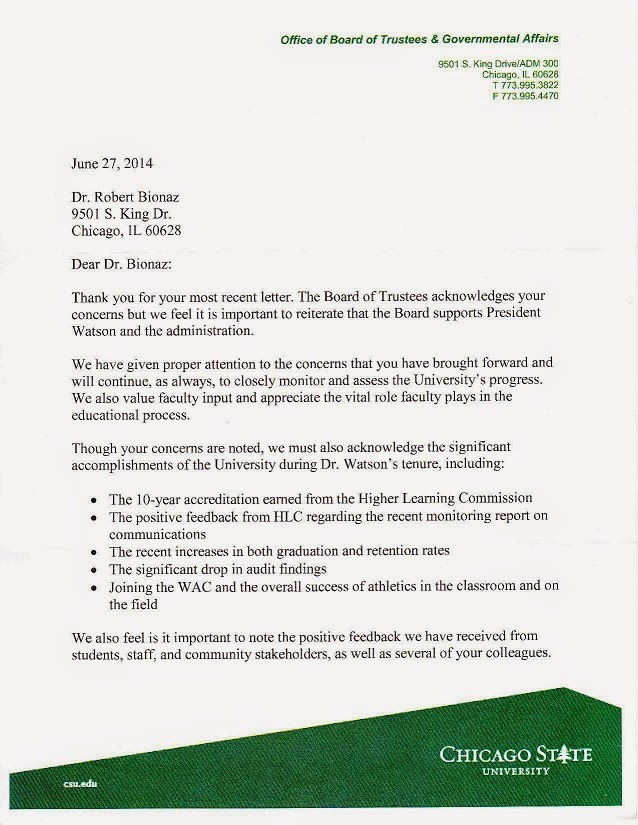 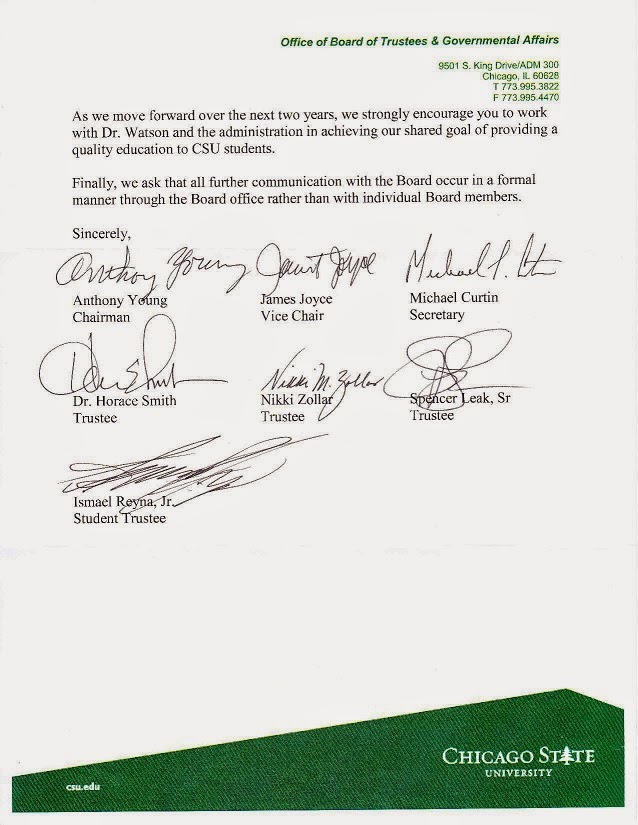 This right-wrong binary is apparent in other matters under the board’s purview. Any policy the promulgated by the university administration must be adopted as soon as possible (witness the recent Cyber-bullying policy). In conrast, the board has ignored resolutions or policy suggestions coming from the Faculty Senate. In fact, during my entire time in the Faculty Senate, I am not aware of any resolution or policy suggestion submitted by that body that has generated any response from either the administration or the board. Frankly, the board could not care less what the faculty thinks, although the board has made exceptions for any faculty member who agrees with Wayne Watson.

So, Watson and his administration are infallible in the eyes of the “independent” Chicago State University Board of Trustees. A brief examination of the recent Crowley trial provides insight into the character of two of the members of the administration most responsible for the recent Anthony Young letter—Wayne Watson and Patrick Cage.

As I demonstrated in previous posts, Wayne Watson has had no problem telling lies to the Board of Trustees. He displayed his penchant for untruthfulness during the Crowley trial. You might recall that Judge McCarthy indicated that the testimony of both Watson and Cage had been “impeached” during the trial. That is a polite legal euphemism for saying that they both made statements that were subsequently demonstrated to be untrue. Here’s Watson’s untruth: Watson claimed under oath that although appointed president at Chicago State effective July 1, 2009, he did nothing offficially until October 1. Watson said he only attended some generic orientations but otherwise had no influence on the day-to-day operations of the school. However, because of the potential problems with his retirement, Chicago State received FOIA requests from SURS seeking to determine if Watson was actually working prior to October 1. In an affidavit, Watson apparently claimed that he had no quarrel with Crowley over the SURS FOIA requests because, in July 2009, he had ordered Crowley to comply with those FOIA requests. Watson and his attorneys apparently realized that Watson’s admission would constitute a violation of SURS retirement rules so they submitted a second affidavit that removed the offending language. Obviously one of Watson’s under-oath statements was untrue. Most important, one jeopardized his retirement. As you can imagine, counsel for the plaintiff had a field day with that discrepancy.

As far as Patrick Cage’s problems, they revolved around the actual firing of Crowley. The university apparently had an exclusive contract with Pepsi-Cola during the time Crowley served in the Jones Convocation Center. According to testimony, faculty complained about seeing Coca-Cola trucks at the center (really, faculty?), a violation of Pepsi’s exclusive contract. These “faculty” complaints spurred Cage to ask Internal Auditor John Meehan to audit Crowley’s operation. Meehan found this request puzzling since he had done an audit only a few months earlier and another one was scheduled to begin in less than three months. In a classic example of how Chicago State’s administration conducts their star chamber style investigations, Watson fired Crowley before the completion of the investigation—Meehan wrote the investigative report some weeks after Crowley’s termination. Cage tried to pressure Meehan to find in his audit report that Crowley had “misused” public funds. According to Meehan, Cage was the originator of the charge that Crowley had misused public money and Meehan told Cage that he would only disclose accounting errors, that the determination of whether those errors constituted “misuse” would have to be made by the administration. On the stand, Cage could apparently not remember whether Pepsi or Coca-Cola held the exclusive contract and the discrepancies between his account of events and Meehan’s raised substantive doubts about Cage’s credibility.

So, our all-knowing board has decided that the credibility of administrators like Cage and Watson far outdistances the credibility of Watson’s critics. So be it. I can say, however, that in nearly 23 years of law enforcement, I certainly never changed my testimony, had my testimony “impeached,” or lied in a courtroom. Nonetheless, as the board makes clear, my integrity is questionable and my concerns are worthy of nothing more than condescension and paternalistic disapproval.

Posted by Robert Bionaz at 1:52 PM