In the Orwellian world of Chicago State University, Wayne Watson's constant bloviating about "transparency" has become an almost comedic trope. As Paul points out in his previous post, the Watson administration, apparently so concerned about appropriate "process" as practiced by every other university constituency, consistently fails to apply those same stringent criteria to itself. This year's student elections are a prime case in point and offer a glimpse at two things that have been constants during this seemingly never-ending administration: 1) the ethically questionable, even corrupt practices of this administration are not limited to the university's faculty; 2) the administration does everything possible to prevent its activities being exposed to the light of day. This includes stonewalling legitimate FOIA requests, by either failing to respond or by offering ludicrous rationales for failing to respond (for examples see Public Access Counselor opinion 13-009, available here: http://foia.ilattorneygeneral.net/2013binding.aspx, or the most extreme case, opinion 12-003, available here: http://foia.ilattorneygeneral.net/2012binding.aspx).

Following the administration's refusal to accept the results of the May 2013 SGA election, it resisted the effort by the aggrieved parties, Willie Preston and Brittany Bailey, to discover the actual results of the election. Following a legitimate FOIA request by Preston, the administration failed to respond and the matter ultimately had to be resolved by the Illinois Public Access Counselor. Preston made the original request for the election results under the Illinois Freedom of Information Act on May 7, 2013. Due to the administration's failure to respond, it was necessary for Preston to appeal to the Illinois Public Access Counselor who, on October 24, 2013, ordered Chicago State to release the results. Ultimately, Preston received the records on October 30, 2013. The following are excerpts from the Public Access Counselor's letter to Chicago State: 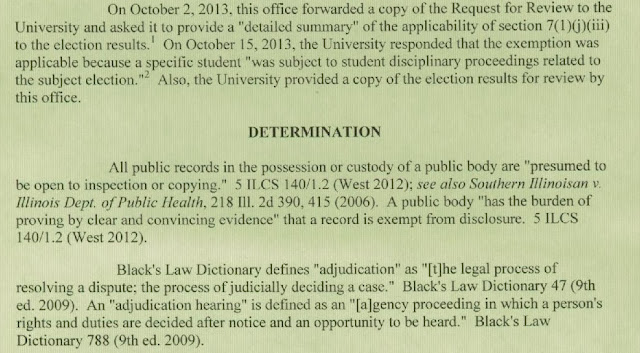 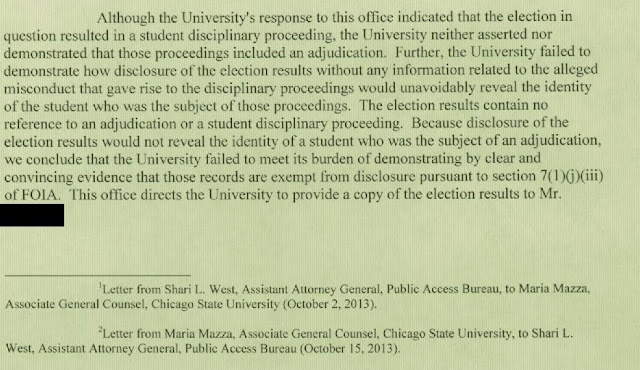 Based on the overwhelming victories achieved by both Preston and Bailey, both running (according to Preston) on a platform that included a proposed motion for the removal of Wayne Watson, it seems obvious why the administration tampered with the election results:

So this is what Watson's vaunted transparency means. If the administration does not get the result it wants from something as seemingly innocuous as a student election, it will simply set the result aside and hold elections until it achieves the desired result. Then, when called to account, it will make a ham-handed attempt to cover its tracks. Democracy and the wishes of the school's students be damned!

As a point of information, I am currently awaiting the results of an appeal to the Illinois Public Access Counselor for a FOIA request I made on November 7, 2013. This administration truly has no desire to see its operations exposed to public scrutiny. Also, all the material posted here is made public with the permission of Willie Preston.
Posted by Robert Bionaz at 4:05 PM