Wayne Watson’s vindictiveness and propensity for retaliation is well established. The myriad lies told by Watson administrators are well documented. What happens to management when the polluted streams of vengeance and mendacity merge? The confluence creates an administrative “style” devoid of integrity, with a president willing to say or do anything to damage his opponents and to retain his power. Look at some of the highlights of the Watson administration: James Crowley, unwilling to violate the Illinois Ethics Act for Watson–fired; Mary Butler, apparently irritating one of Watson’s cronies in Enrollment Management–fired; Glenn Meeks, openly opposing Watson’s continued presidency–fired; Resche Hines, transgressions unknown–fired. In addition, a number of persons (like Lois Davis) in part unable to stomach the administrative style of Watson and his minions, have either resigned their positions or retired.

Given his seemingly insatiable desire for revenge on his critics or those who do not bend to his will, Watson likes to operate in secret. However, the Illinois Freedom of Information Act enables us to have a look at how he and his administration work to discredit detractors while it simultaneously rewards Watson cronies in spite of their numerous official lies and unsatisfactory performances.

In February and March 2013, Watson fought to retain his job as president of Chicago State. He enlisted the assistance of powerful local politicians who mobilized the “community” in support of Watson’s presidency. For his part, rather than make a positive defense of his performance, Watson chose to hide behind his attorney Victor Henderson (you may remember their appearance on local public television). Their rhetorical strategy revolved around positioning Watson as the victim of a number of conspiratorial forces. As part of this strategy, Watson made a series of accusations against Chicago State board members, the University Provost Sandra Westbrooks and the Faculty Senate President Phillip Beverly. These accusations appeared in a draft of a memorandum which circulated and was viewed by both Westbrooks and Beverly. I published excerpts from this memorandum in a previous post but now offer an unexpurgated version in order to demonstrate the depths to which this administration (and this president) will sink to retain power.

These paragraphs come from page 2 of the Watson memorandum: 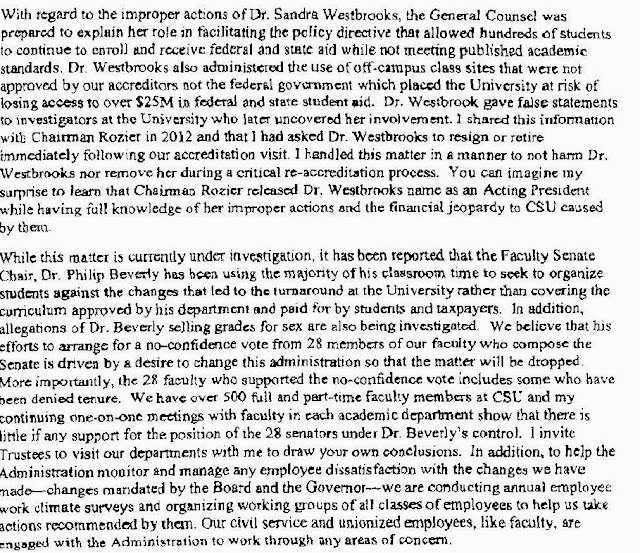 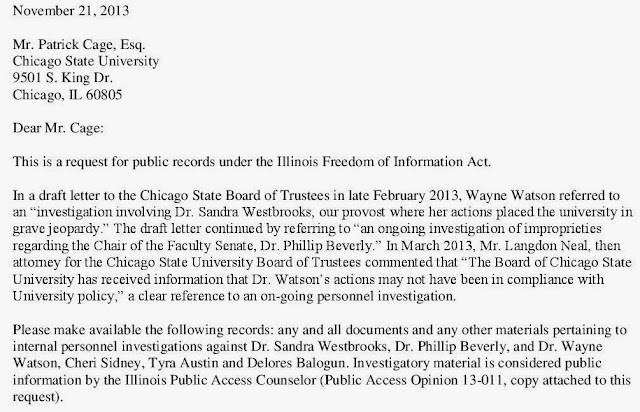 In truth, there were no investigations, as the university's response to my FOIA request clearly demonstrates: 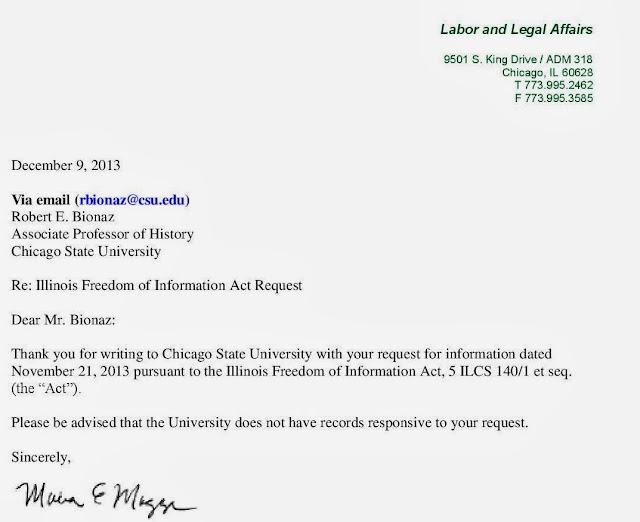 So, did Wayne Watson lie in his memorandum? I will leave that for you to decide. Just as interesting, despite Renee Mitchell's assurance on November 1, 2013 that the university had taken "appropriate personnel actions" against Cheri Sidney and Tyra Austin for the falsification of official university records, the December 9 FOIA response indicates that apparently no one in the university conducted any investigation on those clear falsifications. Are there different sets of personnel and performance standards for persons who, like Cheri Sidney are involved in a close personal relationship with Wayne Watson? Again, I will leave that for the reader to decide. As for Delores Balogun, she was allegedly terminated from her administrative position at Chicago State because she falsified her resume.

Just as an aside, what do you think of the level of civility demonstrated by the Watson memorandum?
Posted by Robert Bionaz at 7:33 AM