Anatomy of a Scam--How to be the Perennial "Educator of the Year."

Introduction to Fleecing the Rubes--How to Win the Same Award More than Once:

One of the great things about the internet is that often things do not disappear, they sort of float out there waiting to be recovered. Many of you might remember the announcement of Watson's "Educator of the Year" award in 2012. If you look at the news releases on the Chicago State website, it is, unfortunately, gone. However, it is still possible to retrieve the news release by doing a simple search of the site. As a result, we can see how our communications (or whatever they're called) people participate in scamming the university community. Do not take my word for this, however, look at the two announcements side-by-side and decide for yourself if this is an example of the old o-ke doke.

Because of Hurricane Sandy, the 2012 Thurgood Marshall awards gala had to be cancelled. Thus, the organization did not actually present any awards (including Watson's award for "Educational Leadership") in 2012. This is the announcement of the event's cancellation: https://www.thurgoodmarshallfund.net/press/the-thurgood-marshall-college-fund-25th-anniversary-awards-gala-in-new-york-city-october-29-2012-at-the-hilton-hotel-is-cancelled. Nonetheless, the day after the scheduled gala, Chicago State's website carried an announcement that the Thurgood Marshall College Fund had "coined" Watson as "Educator of the Year." Here's the October 30, 2012 announcement from the Chicago State web site (I've put the link into the text in case anyone is interested) of Watson's award in 2012: Here's the announcement from the Chicago State web site of the same award to Watson in 2013: 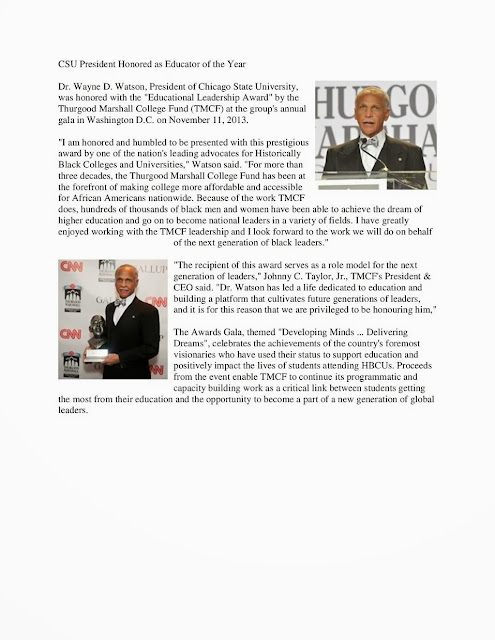 Now we know how to turn a single award into multiple awards, simply have a hurricane blow through cancelling the event. When it is held a year later, you can say again that you've been acclaimed the "educator of the year," or something like that. I can only echo the artist on "Cougar 4 Life." "Really?"
Posted by Robert Bionaz at 12:11 PM