The Flim Flam Man, His Administrative Clown Show and the "Big Con" at Chicago State

In just the past four weeks, Wayne Watson’s Chicago State administration has increased its output of lies, misrepresentations and cynical distortions.

On November 11, Patrick Cage, the university’s lead counsel (and suddenly another Vice President) sent out the now infamous “cease and desist” order citing trademark infringement as a rationale for ordering the faculty voice blog “disabled.” At the time of Cage’s letter guess how many registered trademarks the university held? None would be the correct answer. On December 2, the university responded to a FOIA request for trademark numbers. An examination of the material sent by the university reveals that Chicago State applied for three trademarks on November 14, 2013, three days after Cage’s communication. Anyone interested in following the progress of these applications (one has already been voided because CSU failed to meet minimum filing requirements), can go to the US Patent and Trademark website (http://www.uspto.gov/trademarks/process/search/) and look up application numbers 86119380 and 86119007. The misfiled application was 86119147.Here is a portion of one of the applications that displays the application date of November 14, 2013: 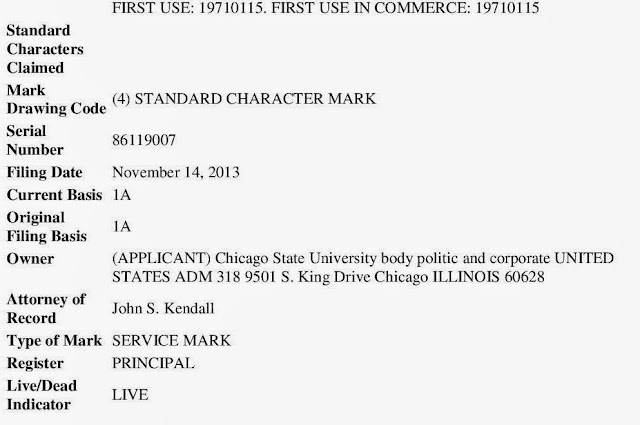 Around the same time, we found out through the Chicago State Marketing and Communications folks that our wonderful president had received two prestigious awards in November 2013. First, he had been elected Chairman of the Board of the National Association of Equal Opportunity in Higher Education (NAFEO), second, he had received the Educational Leadership Award from the Thurgood Marshall College Fund. It seems like the administration and its mouthpieces want the rubes to believe that these awards somehow mitigate the myriad failures of the Watson administration.

Not surprisingly, given the performance of our flim flam president and his clown show administration, these announcements were not entirely truthful. Watson had been elected as the NAFEO Board Chairman several months earlier, perhaps as long ago as January or February of this year. This link to an announcement of NAFEO’s upcoming conference on April 14-17, 2013 shows Watson as the Board Chair-Elect: http://www.nafeo.org/dialogue/. As a point of interest, Watson’s predecessor as NAFEO Board Chair, President Ernest McNealey of Stillman College, was abruptly placed on administrative leave by his school in early September and subsequently resigned his position as the college’s president on December 3. http://www.tuscaloosanews.com/article/20130910/NEWS/130909761
http://www.tuscaloosanews.com/article/20131203/news/131209963

In a similar vein, Watson’s award from the Thurgood Marshall Fund is not exactly what it seems. He originally won the award in 2012 and was to receive it at the fund’s twenty-fifth gala. However, Hurricane Sandy forced the cancellation of the event. Instead, the twenty-fifty gala occurred in 2013 and all of the major award recipients from 2012 received their awards in 2013. While Watson indeed received the award, the recent announcement gave the impression that it was a recent honor, rather than something more than a year old. Here is the 2012 announcement from the Thurgood Marshall website: http://www.thurgoodmarshallfund.net/press/the-thurgood-marshall-college-fund-honors-education-pioneer-wayne-d-watson-at-25th-anniversary-awards-gala. Anyone taking the time to compare the 2012 announcement with the 2013 university press release will note the similarities, including the theme: “Developing Minds and Delivering Dreams.”

On December 3, 2013, the interim provost claimed that she had never referred to the “invalidity” of the Chicago State Faculty Senate. However, her memorandum of October 31, 2013 to the faculty senate and subsequently the entire university faculty renders her December 3 assertion untrue. Here is the significant paragraph from the provost’s memorandum:

That sounds to me like the provost is talking about the senate's "invalidity."

All these falsehoods are part of the big con that Watson and his minions are running on the students, staff, faculty, alumni and other administrators at Chicago State as well as on the citizens and taxpayers of the state of Illinois. We have an upper administration populated with persons who have falsified their educational or experiential credentials. We have an administration that consistently fails to follow its own policies and procedures while paradoxically being interested in the activities of other university bodies--particularly those bodies that have been or are critical of the president and his administrators. We have a president who cannot even begin to solve the various problems that beset the university but who garners personal awards which can cynically be used in a public relations effort to offset criticism of his activities. Should we next expect an announcement that some political ally of Watson has contributed money to the school?

In the past four years, the Watson administration has proven itself to be venal, incompetent and arrogant. This rancid administration has inflicted severe damage on Chicago State University and will continue to do so as long as it retains its control over the school. In a subsequent post, I will detail the lengths to which Watson will go to retain his "power."

Posted by Robert Bionaz at 8:07 AM