For his most ardent supporters, Wayne Watson's greatness is indisputable. In early 2010, I overheard Leon Finney call Watson "the finest educator of our time." In March 2013, Watson's attorney compared his client to Jesus of Nazareth and Dr. Martin Luther King, Jr. Just yesterday one of Watson's top administrators rose at the Board of Trustees meeting to bear witness to Wayne Watson's greatness as a "leader." Watson has garnered numerous awards from outside groups with which he has close political connections attesting to his greatness as an "educator" and "leader." This is the narrative that his most fawning acolytes have disseminated through a variety of media outlets. For my part, I would be satisfied with simple competence.

There is also an extant counter-narrative. In this narrative, Watson is portrayed as a petty little dictator, a cowardly bully with a profound ignorance of academic matters and a proven propensity for vindictiveness. In this narrative, Watson, has been a colossal administrative failure at both City Colleges and here at Chicago State. These competing narratives have different types of evidence, much of which has been presented on this blog. However, there is one piece of evidence that has heretofore been missing: the C.V. of the great man himself. According to one member of the 2009 Presidential Advisory Committee, that committee did not see Watson's C.V. during the selection process for Frank Pogue's successor as Chicago State President.

Now, thanks to the Illinois Freedom of Information Act, we have the opportunity to examine Wayne Watson's C.V. As you do so, I would ask that you keep in mind what you think are the desired qualifications for a university president then see if they are present in Watson's resume. I would also ask you to consider why this document has been such a closely held secret, after all, the president of Chicago State is a public figure who should be delighted to share his formidable academic credentials with the outside world.

At the PEC meeting on November 6 (the same meeting at which Patrick Cage discovered the existence of the Faculty Voice blog), Watson bemoaned the "incivility" of the posts on the blog and reportedly asked someone (paraphrased) "how would you feel if your resume was on the blog?" After today, Watson will have no need to ask that question, he will know how it feels to have his resume on the blog. This is the C.V. Watson submitted to Chicago State during the search for a new president in 2009.

The first six pages are basically a catalog of Watson's "accomplishments" in various administrative positions at the City Colleges. It begins with Watson as Chancellor of the City Colleges of Chicago: 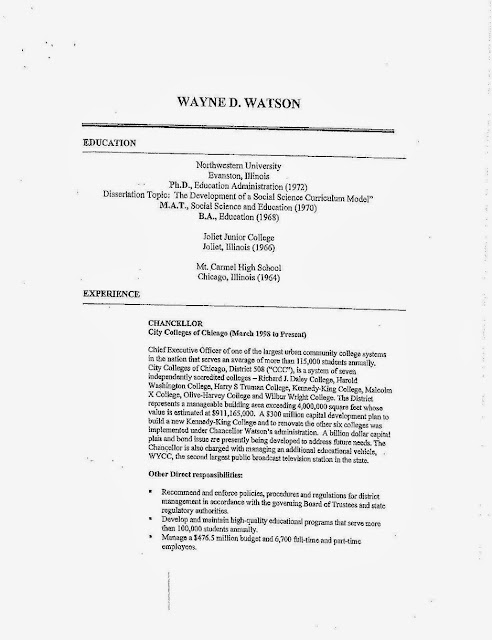 On page two he continues his catalog of achievements as City Colleges Chancellor: 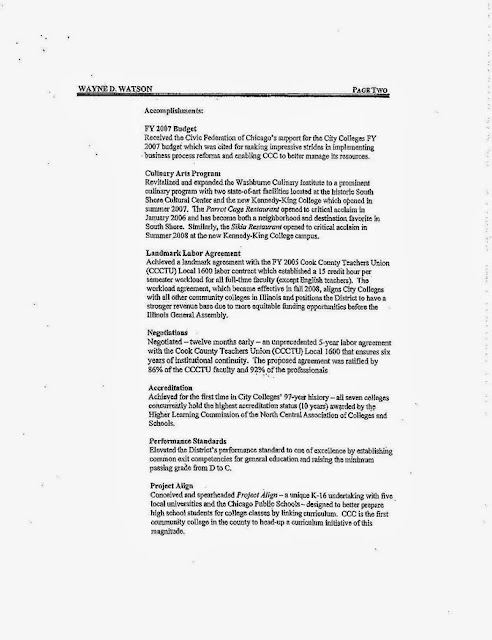 The parade of achievements as Chancellor continues on page three: 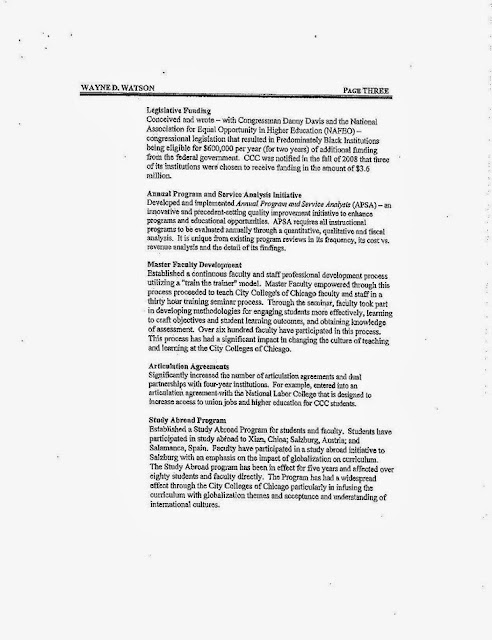 On page four, Watson finishes his narrative about his Chancellorship and talks about his presidency at Kennedy-King: 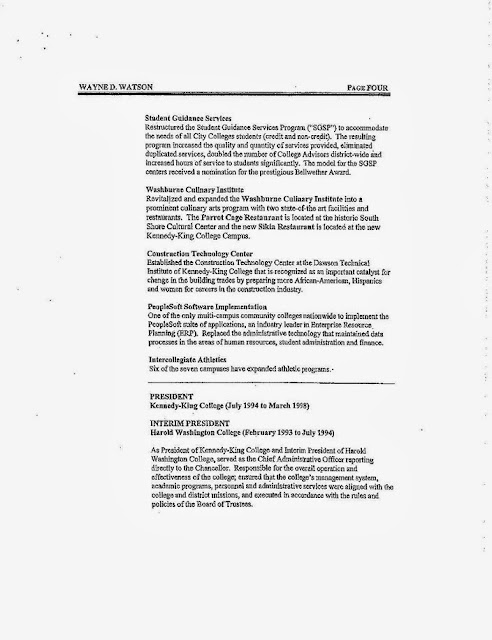 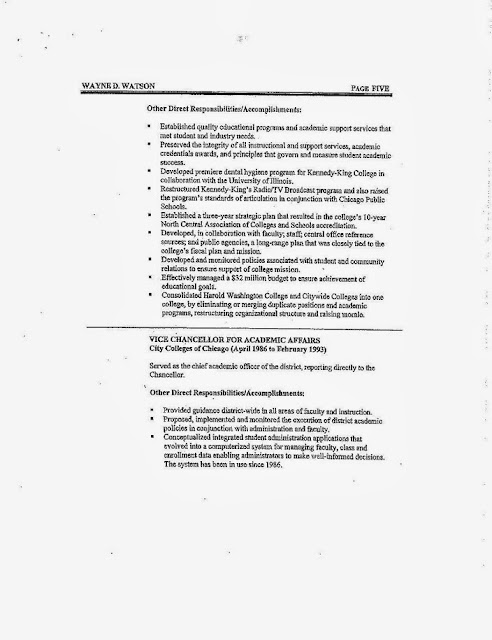 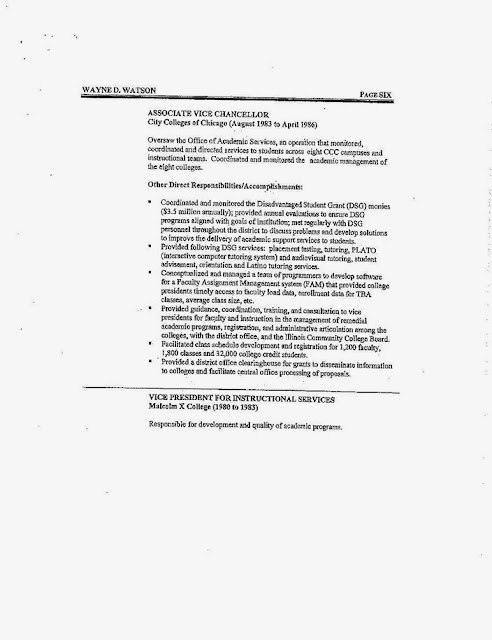 On page seven, Watson describes his position as Headmaster of Boggs Academy in Georgia and his first job with City Colleges: 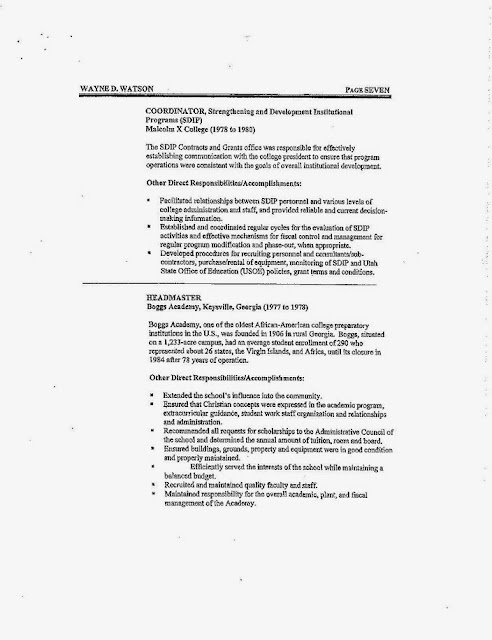 At the bottom of page eight, Watson lists his only "scholarly" achievements. They are under the description of "Major Papers" and are presented without reference to any venue and for two of them no dates. This is the sum total of Watson's scholarly production since receiving his Ph.D. in 1972. This page also includes Watson's only full-time teaching experience: 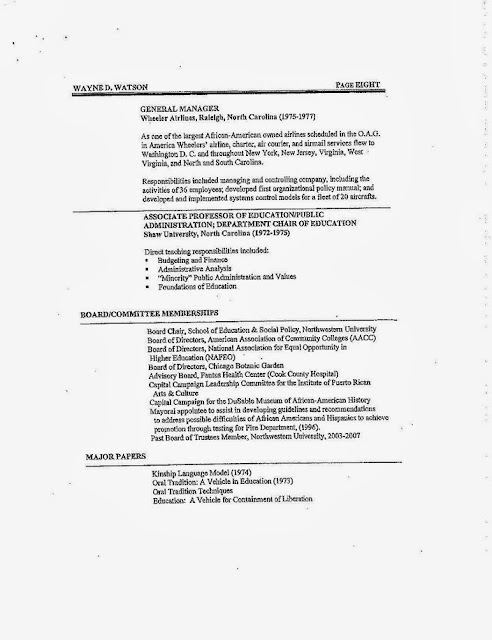 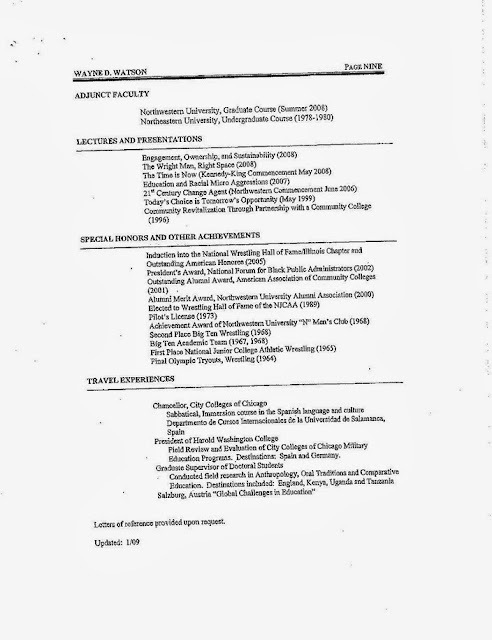 This concludes Wayne Watson's curriculum vitae. In my estimation, it explains much. Based on his various "accomplishments" since receiving his Ph.D. he is not even tenurable at Chicago State, let alone fit to be president. Thus, he has no conception of what it means to be a faculty member much less an administrator at a university. Wayne Watson simply lacks the requisite qualifications for the position he holds, as do many of his top administrators: Angela Henderson, Cheri Sidney and Tyra Austin, all of whom lied on their applications and/or resumes. As is Angela Henderson, Watson may be qualified for an entry-level position as an Assistant Professor. My final questions are these: this guy decides which faculty applicants are worthy of employment at Chicago State? he decides who is worthy of retention, promotion and tenure? What a scam perpetrated on the Chicago State community and the taxpayers of Illinois.
Posted by Robert Bionaz at 10:26 AM