"In the public sphere . . . cronyism . . . undermine[s] the common good. When someone is granted a position because of connections rather than because he or she has the best credentials and experience, the service that person renders to the public may be inferior. Also, because favoritism is often covert . . . this practice undercuts the transparency that should be part of governmental hiring and contracting processes."

Now, how do I slide my girlfriend into a plum senior administrative position?

This is the first of two blog posts that will detail the administrative machinations that brought us Wayne Watson’s girlfriend as a senior university administrator and allow her to remain in that position. In subsequent posts, I will discuss how if you are the president's girlfriend you can lie on your application and/or resume and retain your position. I will also have the privilege of sharing with you the sterling C.V. of our president. As you may recall, Watson officially assumed his duties as president on October 1, 2009. Less than a week later, the university hired Sidney into a newly created position: Associate Director of Human Resources. The university started Sidney at a salary of $90,000 per year, with $60,000 to be paid between her starting date in November 2009 and the end of the fiscal year on June 30, 2010. 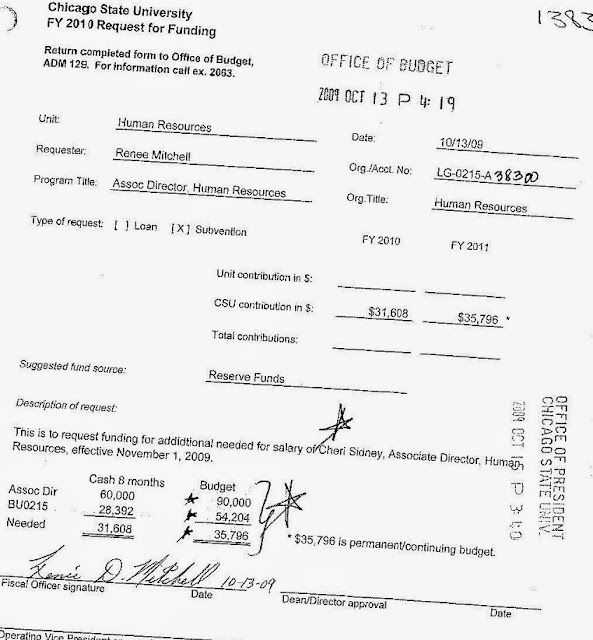 As the FY 2010 Fiscal Year Request for Funding indicates, only $28,392 existed in the budget to cover the expense of Sidney’s salary, a shortfall of $31,608. As the memorandum of October 13, 2009 from Renee Mitchell to Wayne Watson demonstrates, the university made up the difference by transferring funds from two sources: the University Contingency Reserve and the General Administration Personnel Budget (pages 15 and 17 of the 2011 Chicago State University Internal Operating Budget). 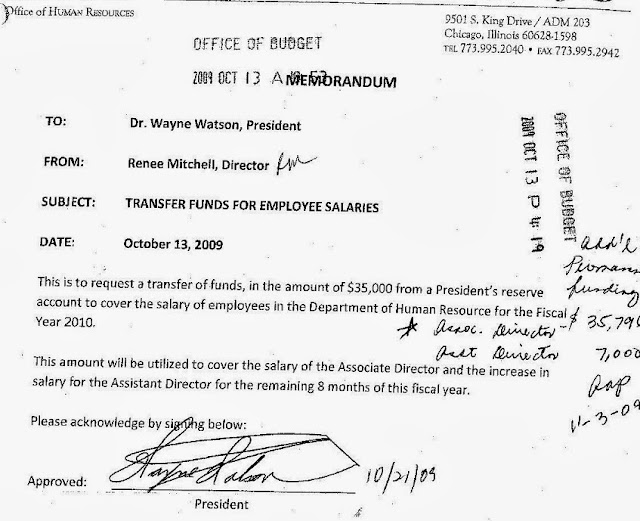 In order to pay Sidney her $90,000 salary in fiscal 2011, it was necessary to transfer $35,796 from the General Administration Personnel Budget to Human Resources, as the Budget Change Form dated 10/29/09 reveals:

This seems like a nice job with a good salary. However, when you are the president’s girlfriend, you get promoted quickly at Chicago State. On June 1, 2010, the administration elevated Sidney to the position of Director of Enrollment Management, another newly created position. This promotion included a $5,004 raise, taken out of the budgeted salary of the the Vice President of Enrollment Management, as is apparent from the Budget Change Form. 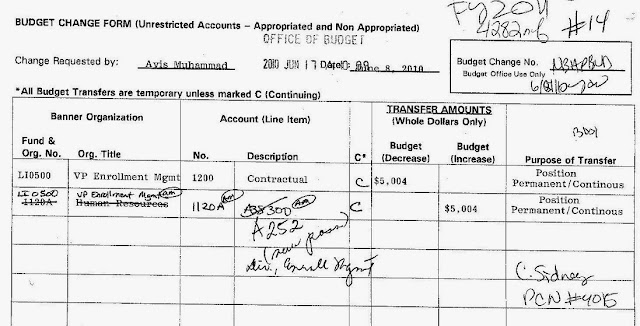 From the Personnel Change Notice, you’ll discover that the Associate Director’s job held by Sidney terminated on May 31, 2010, never to appear again in the Chicago State budget: 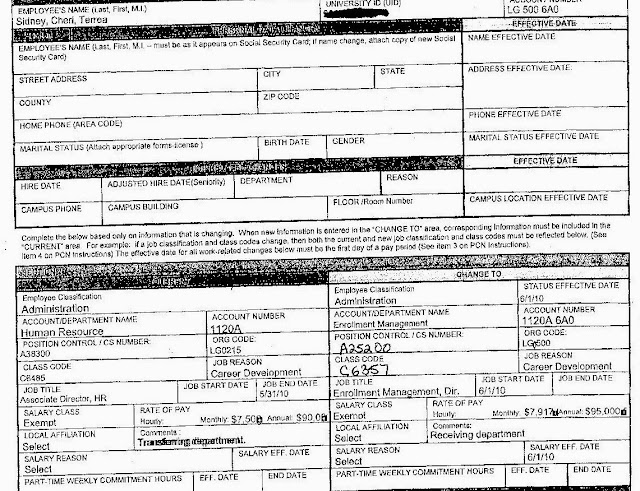 Sidney’s next promotion came quickly again. On September 1, 2011, she ascended to the position of Associate Vice President of Enrollment Management. Again, her previous job disappeared from the university budget. As the Personnel Change Notice reveals, this promotion included a $15,000 raise, meaning that Sidney’s salary had increased 22 percent in less than 2 years: 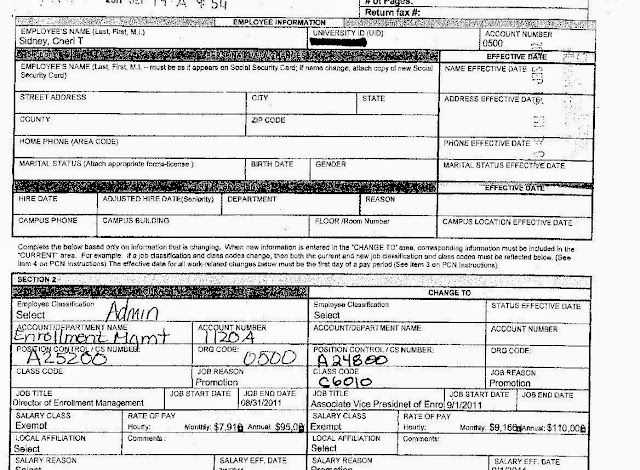 Since her only qualifications for any of the jobs seemed to be her personal involvement with Watson, it seems fair to say that It really pays to be involved in a romantic relationship with Chicago State’s president.

Posted by Robert Bionaz at 8:42 PM