Illinois Politicians and a Host of Others Knew Damn Well What Was Going on at Chicago State: They Chose to Do Nothing

Two days ago, Rauner’s office circulated a memorandum responding to the Thapedi-Jones proposal to provide emergency operating funds for Chicago State. The memorandum offers a laundry list of Chicago State’s “failures” in academics, financial management, and administrative ethics. It also, I think, signals again the willingness of the Rauner regime to punish the innocent for the misdeeds and incompetence of school officials, abetted by an entirely complicit Board of Trustees. While there is plenty of blame to go around for Chicago State’s “failures,” in my estimation, the lion’s share must be laid at the feet of the state’s politicians, all the way up to the Governor’s office.

A look at the various points in the memorandum makes clear that most of its information comes from various public sources: IBHE, the Chicago Tribune, the Illinois Auditor General. While I cannot speak for the accuracy of all the material in the memorandum, much of this material has appeared over the past few years on this forum and will come as no surprise to our readers. Therin lies the problem because nowhere in the memorandum does the Governor’s office assign any blame to the Illinois politicians, the University’s Board of Trustees (selected by politicians) or a news media apparently unwilling to look at the inner workings of the Watson administration at Chicago State. Not surprisingly, the majority of problems cited in the memorandum have occurred since the end of 2009.

Let me briefly catalog the efforts of some Chicago State faculty and students over the past six-plus years to get someone in power to address the administrative misconduct at our school. Obviously, we have used this blog to expose a number of scandals. A number of us have appealed to the IBHE, our Board of Trustees, the Better Government Association, the media, State Representatives and Senators, even the Governor, to step in and save the school from the Watson administration. The response from all these purported watchdog groups: the IBHE totally ignored our letters, the University Board of Trustees did nothing about our concerns. Instead, they consistently acted in the best interests of Wayne Watson to the detriment of Chicago State. The Better Government Association responded with a dismissive “Chicago State is on our radar” e-mail. Various media outlets, print and electronic, showed no interest in a spate of documented incidents of mismanagement and misconduct; the State Representatives and Senators listened politely then said they could do nothing. Of course, the Governor’s office could not be bothered. In our attempt to find someone who might listen and actually act, we spoke to Democrats and Republicans, mainstream and alternative media. The sum total of all these efforts: nothing. Wayne Watson’s political connections enabled him to weather every scandal and his various cronies retained their sinecures. In the final slap in the face to the Chicago State faculty and staff, after his "retirement" this Board granted Watson tenure and allowed him to occupy office space in the library while employing support staff.

Now suddenly, the Illinois Governor is intensely interested in the operational activities of Chicago State. He is deeply concerned about the “waste” of taxpayer dollars. What cynical bullshit! Governor Rauner is shocked! shocked! to find corruption and mismanagement at Chicago State. I suppose there is no institutional memory in the Governor’s office. After all, Rauner is a Republican, not a Democrat, and there’s no reason for him to know that Pat Quinn ignored faculty and staff pleas for his intervention in Watson’s 2009 hiring, while in 2013, he insured Watson’s continued tenure as president by replacing dissident board members with Watson supporters. Neither the Governor nor the Board took any action as multiple scandals plagued the university in 2014. In 2015, Rauner has taken no apparent interest in the hundreds of thousands of dollars in legal fees the university spent (and is still spending) to defend itself against multiple lawsuits. Not a peep from the Governor’s office as the CSU Board continued to waste tax dollars on support staff for the “President Emeritus” to ostensibly write his “memoirs.” Now the Governor says: “[t]he General Assembly cannot turn a blind eye to the rampant financial mismanagement inside the university system that hurts academic performance and sends tuition costs skyrocketing.” Now the legislators wring their hands and do nothing. Guess what folks, if you did not create this problem, your inaction exacerbated it and created the current “crisis.”

As I pointed out in my previous post, the students, faculty, and staff at Chicago State are to be punished for the misdeeds of an administration which came to power through the efforts of Illinois politicians and which survived multiple scandals intact thanks to the efforts of Illinois politicians. To the Governor, State Legislators, Board of Trustees and everyone else who contributed materially to the growth of this cancer, thank you for putting us on life support. We tried to tell you but you simply did not want to listen. For anyone wishing to understand the chronology of events that has contributed to this crisis, simply consult this forum. Finally, after six years of contention we are ready to move forward with a new president. Will we get the chance?

Here’s a copy of the memorandum, it's available here: http://capitolfax.com/2016/01/20/rauner-administration-attacks-majority-black-college/ 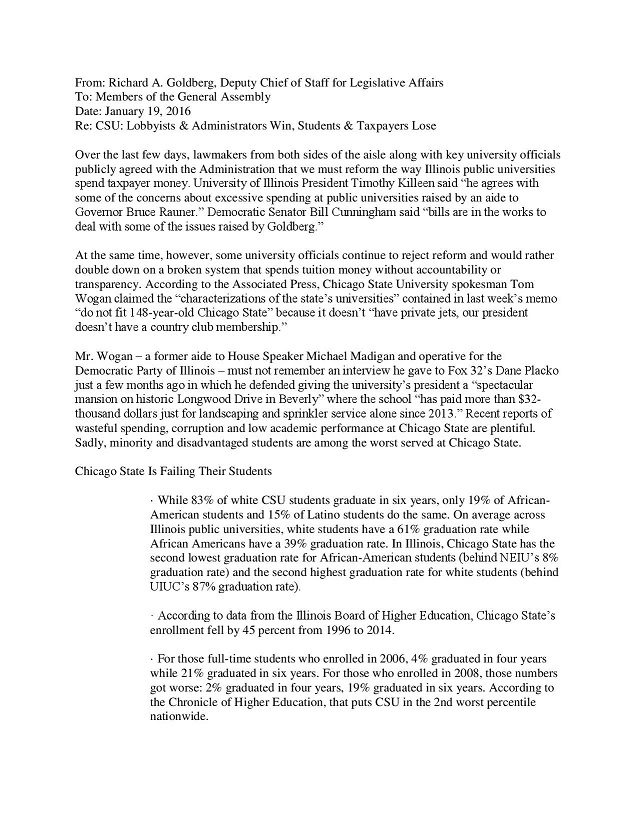 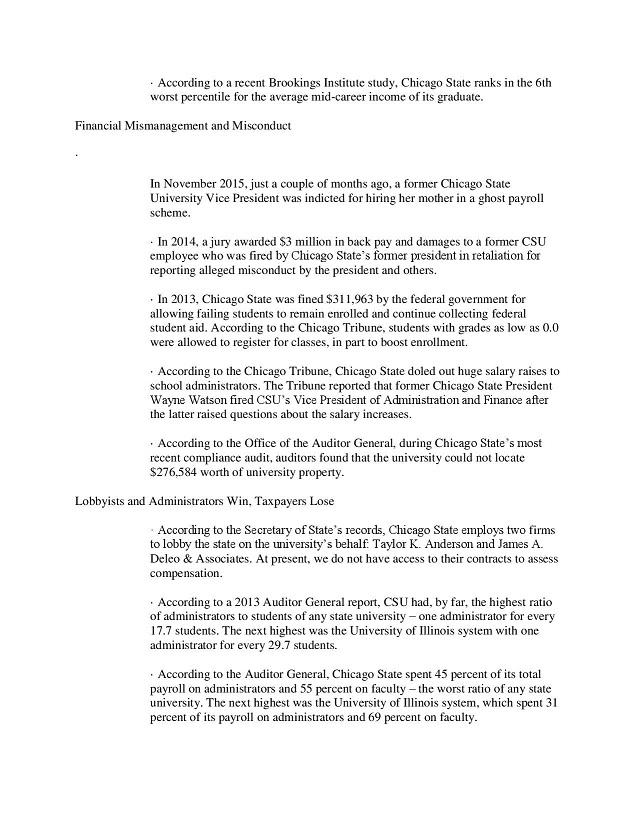 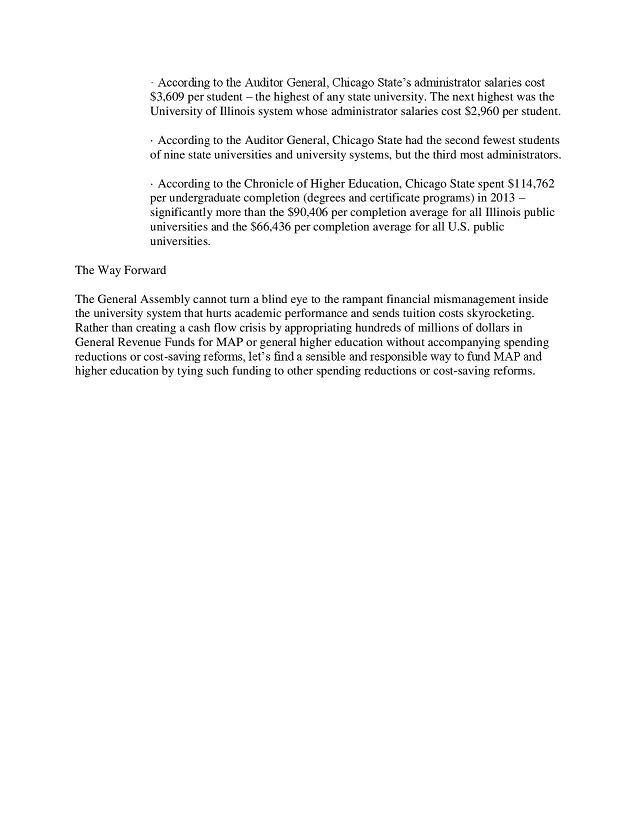 Posted by Robert Bionaz at 6:07 AM