So it looks like the car is spinning out of control and the pavement is dry and free of debris so it must be the driver. Yes, you are in the #CSUclowncar. The recent missive from the new interim president, (I don't know what's considered interim anymore) seems be an exhortation to forget the past and move forward. 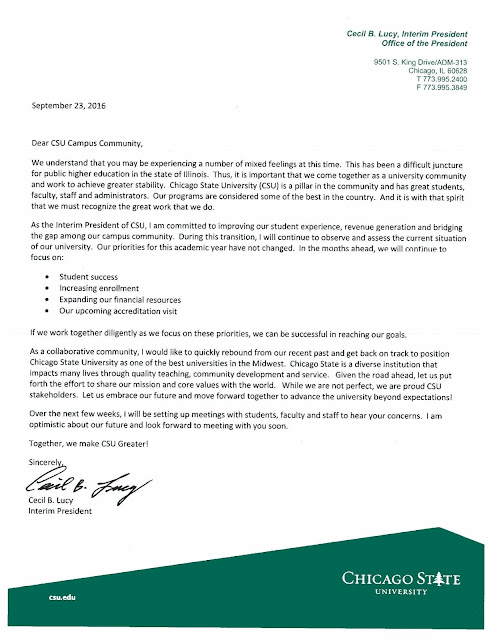 #CSUclowncar is careening out of control and we are supposed to forget the most inept administration in the country is still behind the wheel making decisions that continue to negatively impact the university. I am not often at a loss for words but this left me speechless. Need I recap for you, loyal readers of this humble blog, the disaster of the the last seven years which has led us to this point? I think not.

Suffice it to say, I have ignored the platitudinous drivel that I have heard in the last week. We are beyond the kumbaya phase in the faculty/administration relationship. At this point, it is clear to me that in order for faculty to move on, the provost needs to move on. The plagiarism, the three no-confidence votes, the union busting, the failure of the exigency process, the HLC sanction, the general disregard for faculty, the absence of shared governance, the petty retaliation against dissenters have become too much for faculty to countenance considering any sort of reconciliation. If the board, the president and the provost don't understand this, then they are intentionally obtuse or openly contemptuous of the experience of faculty and staff at this university.

For someone who is so widely disdained, why the university won't move on from her failed attempts at administration is beyond me. To expect the survivors of the Watson inspired blood bath to now flock to its key henchmen in some ridiculous show of unity demonstrates how out of touch this administration is.

I believe many if not most people are planning for the worst, a de facto closing in May 2017 because the #CSUclowncar has managed to gut the vital infrastructure of the institution. Enrollment Management exists in name only. Academic Affairs is barely functional. Administration and Finance is playing a massive shell game, robbing Peter to pay Paul (and Thomas). Morale is non-existent. Staff and faculty ranks (the institutional memory) have been decimated while the administrative ranks remain intact. The handwriting seems pretty clear. We aren't destined for a rebuild, reset, or retool.

We are destined to continue as a political football however as the Legislative Black Caucus tries to protect its interests in the university, and the governor tries to score political points with his base in an election cycle against his opposition, and a hand full of thoughtful legislators try to keep the university viable. All of this happening against the backdrop of a board that has done nothing but fuel the #CSUclowncar and taken turns at the wheel.

To my faculty colleagues, I ask this. Is the time approaching that we demand the institution be shuttered so that this nonsense can be brought to an end?
Posted by Phillip Beverly at 6:48 PM