You Know You're At CSU When...

So you know you’re at CSU when... has become an interesting exercise for me recently. I've discovered some examples to fill in and invite you loyal readers to participate in my "So you know you're at CSU when..." challenge.
You know you’re at CSU when the highest credentialed person in a division is a receptionist. Yes, loyal readers, you read that right. To wit, the Division of Enrollment Management, that cancerous growth strangling the life out of the university. Dr. Avis Muhammad, who has several years of university teaching experience, and executive administrative experience had through the ineptness of the current regime been relegated to answering queries from various and sundry at the division’s front desk. How in the world could this happen you say. How could someone with a terminal degree and university teaching experience only ascend to an entry level job? How could someone with nearly two decades of experience at the institution not be in charge of the division responsible for providing the life blood of the university, the students? How indeed! Well we need look no further than looking at who is in charge of the division at the moment. That would be none other than Cheri Sidney. Yes, loyal readers that is the same Cheri Sidney who lied on the job application for the job that was created for her by her paramour, Wayne Watson. The same Cheri Sidney who has during her time at the university made no discernible contribution to the university’s future. This is the same Cheri Sidney who now appears to be changing career paths from Enrollment Management to compliance. Compliance you say. I do. I do. If you notice her signature block you will see CCEP. That isn’t an acronym from the old Soviet Union. It actually stands for Certified Compliance and Ethics Professional. I must admit to being taken aback by the irony of someone caught falsifying a job application being certified as a CCEP. But let us continue. This certification is not new to the university. We have had three former employees who were all CCEPs. The former Interim Vice President for Enrollment Management began her employ as a Compliance Officer in Enrollment Management. Her replacement, since left, was also a CCEP and the former Director of Compliance for the university was a CCEP. This got me thinking about how one could become a CCEP, so I visited the website of the organization that certifies these professionals, the Compliance Certification Board, to see what the criteria are for certification. You can visit and see the criteria here.
The first of the five steps to gaining certification is to acquire work experience. According to the CCB for an
“Active Compliance Professional means:
* You have at least one year in a full-time compliance position.
* At least 50 percent of your job duties are directly related to compliance and ethics.
* Your duties are directly related to those in the “Detailed Content Outline."
Active Compliance Professionals include, but are not limited to, compliance and ethics officers.”

This is very curious because that would mean that since she became the Associate Vice President for Enrollment Management she would have had to do compliance for one year with at least fifty percent of her duties being directly related to compliance and ethics. I am dubious that either of these criteria were met. And if they were that came at the expense of managing a division that had grown out of control with an unprecedented enrollment decline. Given her already proven propensity to lie, it seems unlikely that Step One was accomplished with the intention of the CCB. 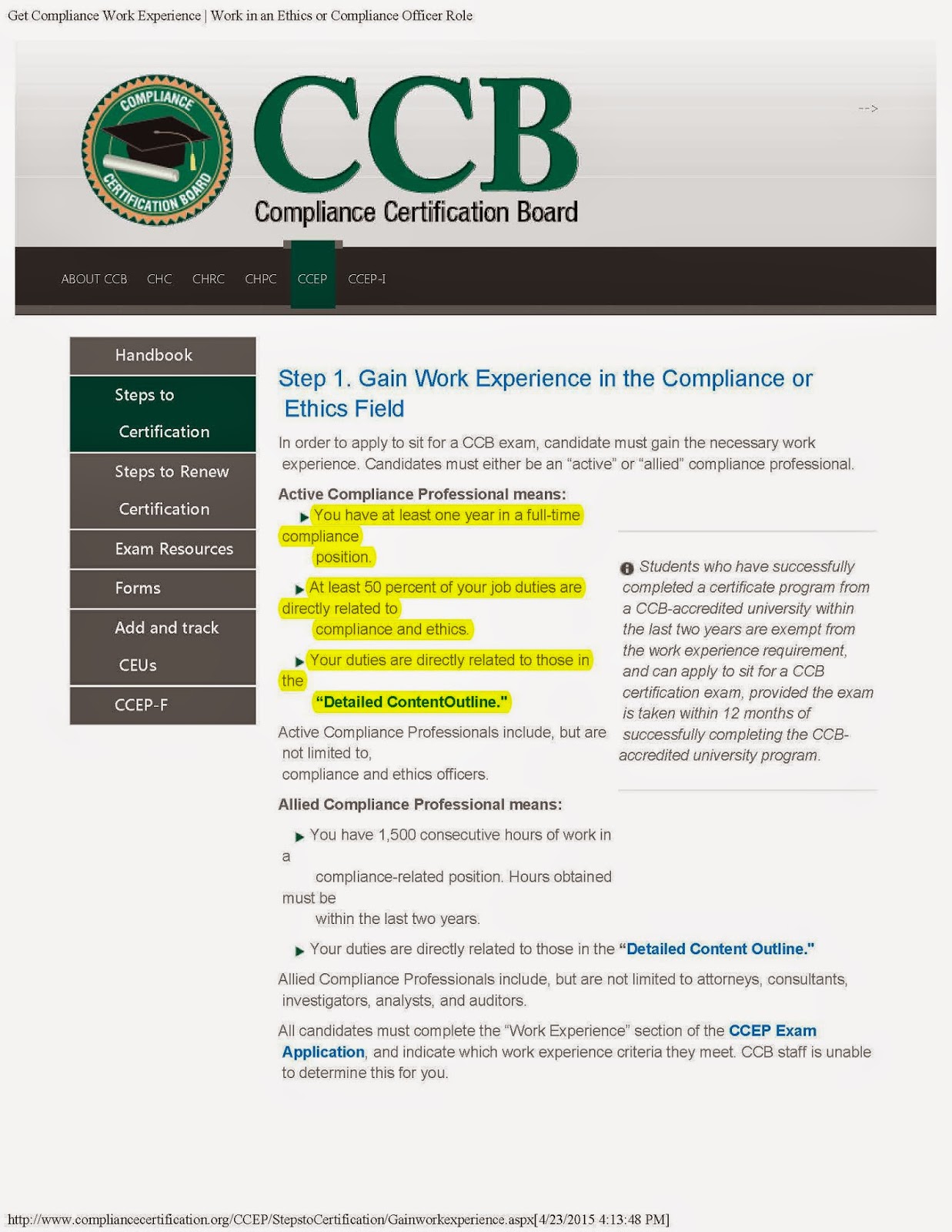 Step Two is interesting as well. Many professions require CEUs to maintain certification. CCB requires “20 CCB approved continuing education units” in order to sit for the examination. It appears Sidney did in fact complete this requirement by attending a “Basic Compliance & Ethics Academy” in Vancouver British Columbia in July 2014. If you look at the Travel Authorization shown below you will see it is dated July 1, 2014 with approval by both the Interim Provost and President on July 3rd. My understanding of university policy is that out of country travel requires a thirty day approval and the math on this authorization indicates only 18 days. For someone going to a compliance training, I would suggest starting with the application process to ensure compliance with your own request. Fortunately this conference satisfied the CEU requirement and conceivably prepared Sidney to take the CCEP exam. 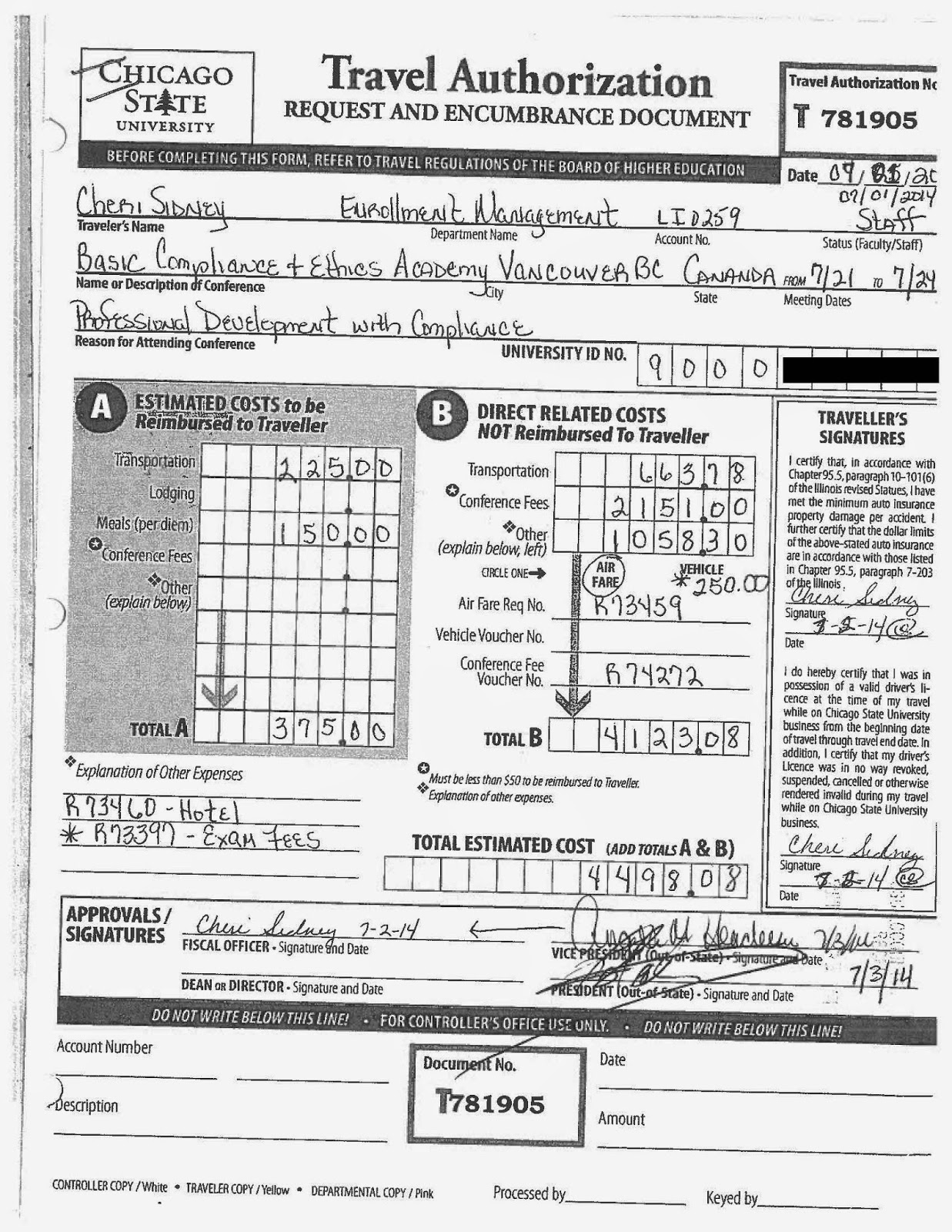 Step 3 of the certification process “Apply to Take the CCEP Exam” comes only after a candidacy status. I would imagine this would be the one year period of experience outlined in Step 1. If, in fact, Sidney had been operating in a compliance capacity for a one year period, who was overseeing enrollment management? Could this provide a partial explanation for the epic failure of that division since the arrival of her superior in 2009? While she was out spending $4,500 to travel to Vancouver to attend training not related to enrollment or admissions, the university continued to bleed students. It does not appear that someone with the ethical lapses that Sidney has demonstrated would be suited for functioning in a compliance or ethics position. And for state monies to be spent on this endeavor is questionable.
Step 4 of the process is to “Schedule Your Certified Compliance & Ethics Pro Exam” This is straightforward. Testing is available locally at several city and suburban locations.
Finally, at Step 5, an applicant takes and ostensibly passes the 115 question exam in the two hour time period allowed and is awarded the CCEP designation. There seems to be quite a bit of time that needs to be invested in this process. There is content that needs to be studied and an exam to be taken. It is curious that the time invested in this endeavor was not used to improve the appalling performance of the enrollment management division. That state monies were used was also curious especially for out of country travel. Faculty have been repeatedly told there is no money for travel and yet I guess there is if you have some relationship with the president.
The upside of all of this is that hopefully, with having attended the Basic Compliance and Ethics Academy, Sidney won’t lie on any other employment documents or engage in unethical behavior, like creating a hostile work environment for employees who have earned credentials higher than hers.
Loyal readers, feel free to submit your favorite “You know you’re at CSU when...” anecdote. It’s those stories of the current regime that make this university epic in its failure.
Posted by Phillip Beverly at 8:00 AM