Chicago State's Institutional Review Board: Another University Organization Whose Composition Will be Determined by Wayne Watson

I am publishing this at the request of a colleague who wishes to remain anonymous because of fear of retaliation from Watson and his minions. There are a number of troubling points made in this letter: 1) it highlights Wayne Watson's propensity for vindictiveness--apparent in the university's retaliation against Dr. Thomas Lyons and its inexplicable decision to close the HIV/AIDS Research Center; 2) it also underscores Wayne Watson's desire to micro-manage the academic side of the university, an undertaking for which he is completely unqualified; 3) it demonstrates his need to subordinate the welfare of the university to his thirst for revenge; 4) finally, the letter implies that Watson's unwarranted interference in what should be a committee composed of persons with some expertise in academic research seems a predictable outcome of the kind of passivity Chicago State's faculty have demonstrated toward Wayne Watson's frequently disastrous incursions into the university's academic affairs.


On March 12, 2015 CSU’s Institutional Review Board meet to attend to its business of “protect[ing] the rights and welfare of research subjects, through review of research involving human subjects at Chicago State University .” At this meeting Dr. Tom Lyons, IRB Chairperson, announced that he would be resigning from the university and, thus, the IRB needed to elect a new chairperson. After deliberation by IRB members we decided that Dr. McFarland would serve as interim chairperson. He has a long tenure on the committee and is only one of two faculty members on the board with tenure. Given the sensitive nature of the position we thought it best to have a tenured professor serve as chair. Subsequently, Dr. Lyons sent a memo to Dr. Watson and Dr. Henderson informing them of the IRB’s decision. Dr. McFarland began immediately to serve as interim chair of the IRB including approving several research protocols. On March 24, 2015 Dr. Watson sent a letter to Dr. Lyons in which he ignores the wishes of the IRB and chooses an untenured faculty member. Dr. Watson’s choice for IRB chair began to act as chair upon notice by Watson. The IRB met again on April 9, 2015 to review research proposals. In this meeting the IRB discussed Dr. Watson’s decision and raised concerns regarding it. We chose to elect to remove Dr. McFarland as IRB interim chair and elected Dr. Marshall to serve as chair as per Dr. Watson’s order. We also agreed to write a letter outlining our concerns about Dr. Watson’s decision given that the IRB is a committee that often deals with highly sensitive matters and our decisions about what is best for the committee and the university should be followed. The letter would be ‘non-confrontational’ and would seek to advise Dr. Watson and Provost Henderson about the sensitive matter. After two faculty members gave presentations regarding their IRB proposals we voted to approve the proposals. We were forced to adjourn the meeting without completing our work when Dr. McFarland left the meeting. Federal regulations require that at least one voting member of the IRB be male and one voting member female. With Dr. Lyons’ resignation and Dr. McFarland’s absence the IRB could not legally conduct business. Dr. McFarland has since formally resigned and been replaced by Dr. Bernard Rowan. Dr. Rowan is not a faculty member and has no scientific research background. He currently works in Provost Henderson’s office.
I write this hoping that you will publish this on the blog to let others know about this incident. I want to relay some of the concerns that I have regarding these events. First, Dr. Watson has shown very little regard for the faculty. Tom Lyons left the university because he felt unsafe as Dr. Watson had ‘punished’ him for his support of a former student. Dr. Watson and Provost Henderson shuttered the HIV/AIDS Institute that Dr. Lyons administered and bumped Lyons back to faculty ranks. This act cost Tom a great deal in salary and shut down an important program for the black community. In addition, with Dr. McFarland’s research experience and many years on the IRB I am at a loss for why Dr. Watson would want to reject the committee’s recommendation. Dr. McFarland has also supported transformation at Chicago State. Further, Dr. Watson displayed his attitude toward the faculty by putting faculty research in jeopardy and once again flouting shared governance. Faculty members are selected by the IRB to serve on the board because they have the research experience necessary to evaluate potential harm to research subjects and promote research and assist faculty members in their research. IRB expertise was ignored potentially placing the IRB, the university and individual faculty members in harm. Additionally, Dr. Watson has put an untenured faculty member in a very difficult position. Dr. Watson appointed Dr. Marshall without a single conversation taking place (she found out about her appointment when she received the Dr. Watson’s letter). As an untenured faculty member in this environment it is very difficult to say ‘no’ to such a request. It seems as if Dr. Marshall has little choice but to comply with Dr. Watson’s command. The IRB chair is a position that requires a great deal of time and, on occasion, one has to make difficult decisions regarding colleagues’ research. Our colleagues have had their research terminated by the IRB and others have not been allowed to go through with their research. Such decisions could place an untenured IRB chair in the very vulnerable position of making a negative determination on a research protocol by a colleague who may have to sign off on retention or tenure decisions.
While I personally have these concerns regarding Dr. Watson’s decision, there are likely many other issues raised by this.

Thank you for considering publishing this information for others to see,

Here's a look at the composition of the committee. You'll note that Bernard Rowan, the Assistant Provost for Curriculum and Assessment is not listed by his official title. Instead, the web site lists Rowan as a faculty member in the Criminal Justice, Philosophy and Political Science Department. Rowan is an administrator, indicating otherwise is simply another in a long line of lies peddled by this administration. 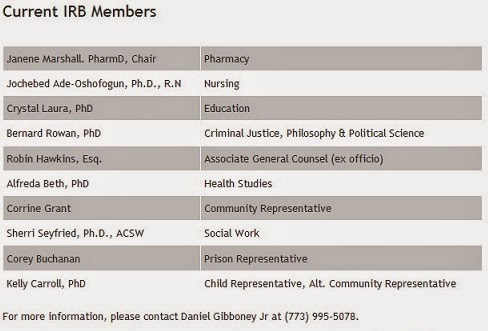 Posted by Robert Bionaz at 3:07 PM