Making Our Most Vulnerable People Pay for the Administration's Mismanagement

Another bit of information from the 2016 ISL forms indicates the number of persons laid off prior to December 15, 2014. Combined with the number of persons recently laid off reveals that Chicago State has apparently eliminated at least 16 jobs in the past year. While these numbers may not be exact, to the best of my knowledge here is the tally: 6 Chief Clerks, eliminating the position; 1 Administrative Clerk, eliminating the position; 5 Security Officers, eliminating the position; 1 Office Support Associate, 1 Human Resources Representative, 1 Information Technology Support Associate, 1 Accountant III. The salary savings realized by taking jobs away from these people proves to be around $535,000, which will just about cover the salaries of the four new crony administrators the university is in the process of hiring. These include: 1) the newly-upgraded (from a Dean) Associate (or Assistant) Vice President of Student Affairs. The crony candidate here and the person who will most likely land the job is Farah Muscadin. 2) The Chief of Police, an obvious crony hire who will most likely be chosen by Wayne Watson’s crony Ronnie Watson. 3) The newly created Director of Alumni Affairs, another likely crony in the Wayne Watson Foundation which will replace the existing CSU Foundation. 4) A new crony employee to be selected as the Vice President of Enrollment Management.

A few days ago, the Deans and Chairs in the College of Arts and Sciences gathered in an “emergency” meeting to rubber-stamp the proposals of Angela Henderson and Academic Affairs for fall course cuts. Below is the memorandum that emerged from that meeting. It could hardly include any ideas worse than the ones enumerated in the document. The first recommendation deals with Freshman Seminar courses. Since those courses had to go through the curriculum approval process, it seems doubtful that the administration can just arbitrarily eliminate them. We will see. The second recommendation is impractical and bumps up against the CSU-UPI contract. One question that comes immediately to mind is this: if the administration plans to “combine multiple sections” will they be combining sections with the same meeting days and times? Given our administration’s demonstrated inability to make the course cuts anything less than a bloodbath, I wonder. The next three proposals are asinine. Since the administration eliminated in recent semesters so many courses that students needed to graduate, it seems highly problematic to use that as a criterion for course cuts; cutting the number of independent studies will further adversely affect students whose courses are being cut, extending their time to graduation and costing them additional money to attend CSU; eliminating the special session seems particularly unwise, particularly since the administration originally offered it as a way to increase enrollment and it provides a safety valve for some students whose courses get cut for the regular semester.

Interesting is that all of the Provost’s recommendations “were agreed” to by the group. Did no one speak against any of these moronic proposals? Proudly, the memorandum acknowledges that the “efforts” of this group includes the elimination of “over 15 adjuncts and at least one full-time temporary position.” Again, the most vulnerable people in the school are paying the price for the administrative mismanagement of the university. Frankly, the “ominous financial situation facing the university” is in no small part a function of the Wayne Watson’s (and cronies) maladministration of this school. Of course, the voices notably absent from this discussion are the students and faculty. These proposals do nothing except make graduation more difficult and attending Chicago State less attractive. Congratulations to everyone associated with this disgrace. We can add these 16 victims to the other 16 real, live people (just in the past year) who have already had their lives negatively affected by the Watson administration. How many administrators will these salary savings enable Watson to hire? Frankly, these policies should be disastrous for Chicago State’s enrollment. 4,000 anyone? 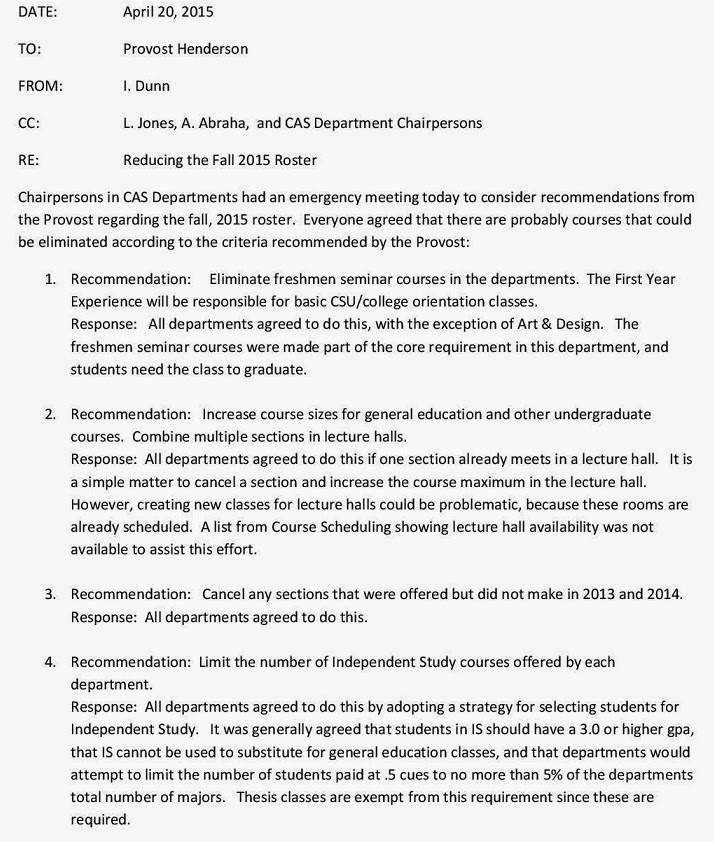 Posted by Robert Bionaz at 9:30 AM