Wayne Watson's Fiscal Stewardship: Spend Like a Sailor in a Brothel

I am pleased to inform my esteemed colleague that I have a paper copy of this year's ISL report which I acquired only yesterday. This report has been posted on the university's web site for the past several years (the 2012 through 2015 versions are currently there). Given the revelations in this year's report, I can understand why Chicago State's administration would want to keep it secret. For information, the ISL Forms are submitted by the university to the Illinois State Legislature and include a wide range of material, much of it in response to questions from the legislature. This year's version is 239 pages.

In an earlier post, I reminded our readers that the Watson presidency at Chicago State, just like the Watson Chancellorship at City Colleges, existed mainly to award jobs and contracts to friends and cronies. The 2016 ISL Forms (the official title) graphically demonstrate this as it enables an observer to understand where Chicago State spends taxpayer dollars. It also permits an analysis of the damage being done to Chicago State by Wayne Watson, supported by a Board of Trustees that steadfastly refuses to acknowledge the disaster unfolding before their eyes. Here are some highlights:

Some of the most lucrative contracts went to firms engaged by Watson to either defend him or to try to dig up evidence to falsely accuse his critics. Pugh, Jones and Johnson who defended Watson in the Jim Crowley case cost the university $103,000; Gonzalez, Saggio and Harlan, the firm who wrote the ridiculous January 2014 letter accusing the blog of trademark infringement got $92,000, John S. Kendall, the attorney who filed the trademark applications three days after the university tried to shut down the blog for trademark infringement of trademarks they did not actually possess, received $52,500; and Laner Muchin, retained to conduct an "investigation" of false charges designed to silence one of Watson's enemies, cost the university $26,500. Obviously, Wayne Watson's various misdeeds are costing the university dearly. In fact, the contract expenses of $787,000 nearly equal City Colleges' expenditure of $835,000 for the same period. Of course, while Chicago State's attorney costs are 94 percent of City Colleges' our little school has about 5 percent of the community college system's enrollment. The total budget appropriation for labor and legal the past two years comes to $606,000. Obviously, last year's expenditures exceeded that total. This year promises to be even more expensive.

Other huge increases occurred in the generic category of "consulting" which more than tripled to $126,000 from $41,000 in 2013, and a category called "Instructional Services," which did not appear in the 2013 ISL, but for which the university spent $225,000 in 2014. Finally, our old friends the Hollins Group got $70,700 from Chicago State for their exhaustive Provost search on the third floor of the Cook building.

Here are the total contract expenses from the 2015 and 2016 ISL Forms. 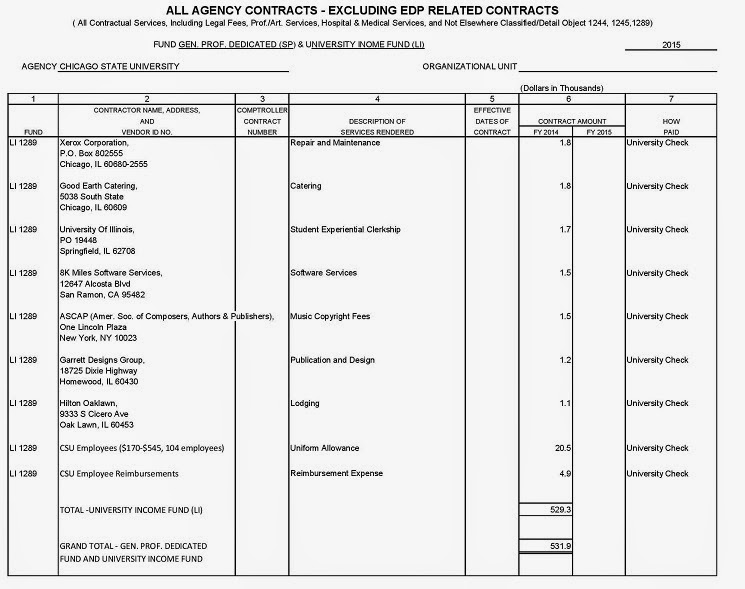 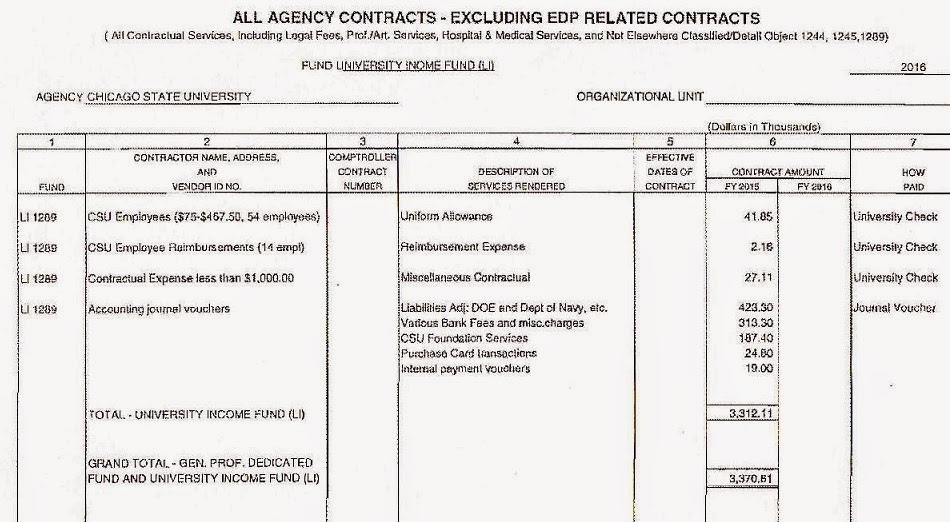 This year's edition of the ISL Forms has a great deal more interesting information that I will detail in subsequent posts. As far as our contract expenditures, it looks like the Watson administration is spending like a drunken sailor (this should not in any way be taken as disparaging sailors), not too concerned about the future fiscal well-being of the university. In fact, this kind of explosive increase in spending supports an interpretation that looting the coffers of the university may actually be afoot here. All the while, our Board members, members of the Illinois State Legislature, and the Governor himself, sit back and do nothing.
Posted by Robert Bionaz at 12:16 PM