If Going Through the Proper Channels Doesn’t Work, Open up the Floodgates: The Hopelessly Incompetent Watson Administration Puts Chicago State at Risk Again

I am posting the following for my colleague Dr. Janet Halpin. Some background information will help readers fully understand the issue here. First, because of previous violations of Title IV regulations, Chicago State is currently on provisional status for the disbursement of financial aid. Second, early in Wayne Watson’s regime, the administration decided to eliminate the Board of Governors (BOG) program and developed a new degree program which it called General Studies. Rather than go through program elimination for BOG then create a new program to replace the BOG degree path, the university simply transferred most of the admission criteria from BOG to General Studies as a Reasonable Modification of an Existing Program. Although BOG and the early General Studies program resided outside the university in special programs, eventually the administration moved General Studies into the College of Arts and Sciences. In order to be admitted to General Studies, a student must have earned 24 hours of college credit and be at least 25 years old. 2012-14 and 2014-16 undergraduate admissions criteria are below: 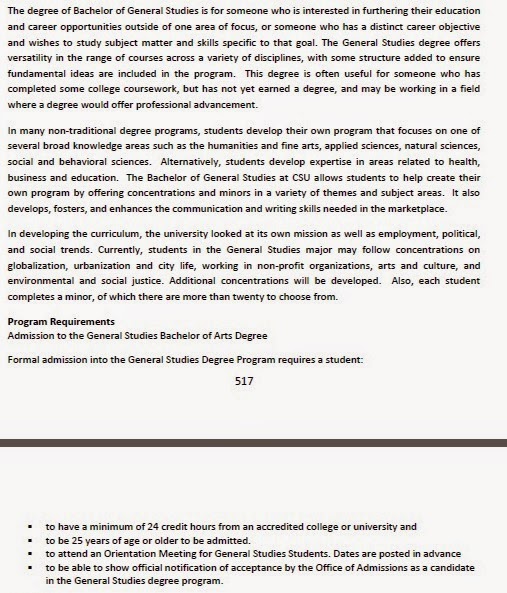 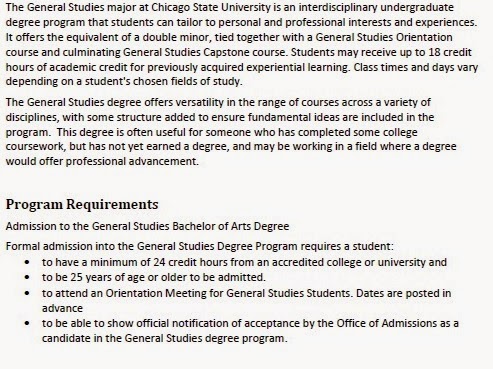 In March, Dr. Halpin discovered that with the knowledge and apparent approval of Angela Henderson, the university had admitted a number of students who simply did not qualify for the General Studies Program. At the end of Dr. Halpin’s post are several e-mails that demonstrate clearly that several administrators knew about the modification of admissions criteria. Of the 47 students enrolled in the General Studies program as of February 17, 2015, only 12 meet the criteria for admission to the program. Thus, 74.4 percent of the students enrolled in General Studies should not be there. Finally, 28 students are enrolled full-time, which means they are eligible for financial aid. Of those 28, 23 (82.1 percent) should not be in the program. Despite her knowledge of the change in admission criteria, Angela Henderson refused to give her written assent to the practice. Nonetheless, as Dr. Halpin’s material makes clear, Henderson is clearly responsible for the change in criteria and will be responsible for the potential consequences of the university’s failure to adhere to IBHE and DOE policies. At the least, it seems likely we will be paying back more financial aid we have unlawfully disbursed.

Here is Dr. Halpin’s post (the first of two, another will appear tomorrow):

If going through the proper channels doesn’t work, open up the floodgates

Dr. H of General Studies and I recognized a serious problem in the General Studies program, and immediately began attempts to have it addressed. This is the original report. It has been edited to remove any identifying information of students. Tomorrow I will document our further attempts, ending with April 15/16, when a newly admitted General Studies Student contacted Dr. H to set up an advising appointment.

On Monday, March 9, 2015 I dropped by your office. A student who left several years ago contacted me to enquire about requirements to graduate if readmitted. I am trying to find a variety of alternatives for this student. I did not see a CAPP option for General Studies, so I thought you might be able to provide some assistance using degree planning sheets. However, we did not get that far.

Our conversation immediately led to the present situation with General Studies, in which enrollment jumped from about two dozen students in 201409 to 47 in 201501, and for whom you have been provided insufficient information. You added that you have not been able to access all the functions of Banner. I have been using Banner since 1998, so I offered to print out some information for you and Prof. D., who is assisting with advising.

Starting on Monday, March 9, and continuing until March 13, I checked each name on the database. Additionally, there were three students listed as GSP who had Academic Early Warnings in October 2014, whose names are no longer on the list of GSP majors. Table One summarizes the results.

Admissions status code No. of students (N=50) Notes on transfer credits
Freshmen (23+) 27 These students were admitted with no university credits at all. Some were admitted for fall 2014 and some for spring 2015
Freshmen (under 23) 1 student was ftftf in 2010/11, but is trying to graduate after being unable to complete their original program
Transfer Freshmen 12 credits ranging from 0* (two students) to 19
Transfer 10 credits ranging from 10 to 63.360
Table One

*I do not fully understand this. A transfer with 0 credit hours implies that these two students had attended an institution of higher education but had no transferable credits: only Fs or Ds, or perhaps developmental Math. The admissions requirements for CSU, according to the catalog and the Admissions website, will not accept a student who is not in good academic standing. I’m not sure what’s going on there. Also, transfer students should have at least 24 (?)


Of the 50 GSP majors, it appears that only about 10 or 15 met usual requirements for admission to Chicago State University based on 24 credit hour minimum or current ACT score for those with fewer than 24 credit hours. Do you have documentation of the “college readiness interviews” that were conducted as part of the admissions process before students were admitted? You said that the information meetings have been very poorly attended. The most recent one, on Tuesday, March 10, 2015, (?) had no attendees. I myself went to one in Spring 2014 when we sat and chatted the entire time because there were no attendees. You said you received a printout of the students who are declared majors, but you have no information about how they were interviewed or by whom.


While the Office of Admissions and First Year Experience handle the admission, orientation, and advisement of new students, when there is a problem students are sent to their major department. You and Professor D. should have documentation for the students listed in Table Two. For them to register for the spring semester, they would have required an academic plan, and probably a petition for reinstatement of financial aid. Additionally, the student who was Dropped for Poor Scholarship would have needed a Petition for Reinstatement and very clear documentation of the compelling circumstances that led to their getting back into the College of Arts and Sciences after the disastrous 0.0 GPA fall semester. [Identifying information has been obscured]:

You probably would not know anything about the following three students who started as
freshmen in fall 2014 but did not return in spring 2015 (Table Three)
I have received from an unnamed source a forwarded copy of a memorandum sent by Ms. Cheri Sidney of Enrollment Management on December 29, 2014 (see below), requesting approval of new Admissions Requirements for the General Studies program. There are numerous serious issues related to this.

When the decision was made in 2011 to phase out the former BOG and replace it with the General Studies program, we were requested to do it as an RME: a Reasonable Modification of an Existing program. There were three iron-clad rules that could not be changed, in order that it remain a non-traditional program for students of 24 or older. This would also forestall the need to apply to the IBHE for a new program.

1. Students could still challenge up to 18 credit hours for coursework based on portfolios demonstrating skill and knowledge competence from life and career experience

2. There would be no foreign language requirement

3. NO STUDENTS WITH FEWER THAN 24 CREDIT HOURS COULD BE ADMITTED TO THE PROGRAM, because in the non-traditional BOG program, students did not have to meet the same admissions requirements as traditional new admits. BOG was separate from the University, and students who wished to change to a regular major were required to apply to the University - it was not a straightforward Change of Major.

Obviously, the credit hour requirement has proven to be the most troubling. As Prof. Nelly Maynard summarized in an email to Dr. Dave Kanis and me on 2/25/2014

“That is why the nontraditional degree program was always under a continuing education, continuing studies, Center for New Learning, "First College" and other similar programs.

The Board of Governors Program has a long history as a separate unit. It was developed in 1972 as a cooperative effort among five state universities formerly under the Illinois Board of Governors. Since then, more colleges and universities: public and private, have opened their doors to this growing population and the competition for adult students, 25 years and older has increased.

The task of restructuring the BOG program requires a second look. If too many obstacles are scattered around and in front of that population, those students will go elsewhere.. They would even pay a higher tuition and attend DePaul or Roosevelt's nontraditional degree program.”


The December 29, 2014 memorandum addresses the plan to change the admission requirements to allow the admission of freshman General Studies students. Why is that a problem?

2. It is a clear violation of an admission requirement that HAD to be in place to move the program from a nontraditional degree program for older adults into an academic college: The College of Arts and Sciences. We could not admit students who had not met the admissions requirements.

4. The memorandum was dated December 29, 2014, but dozens of students had already been admitted under the “new” admissions requirements and had already completed a semester of work. Another cohort was already being admitted and placed in courses for the spring 2015 semester.

5. This was compounded by the fact that pressure was being put on the university to change the catalog to reflect these changes in admissions policy. An email was sent on Feb. 25 and forwarded on March 2, 2015 (see below) asking for the catalog to be changed without a required signature, to avoid “compliance issues”. This was already too late to avoid compliance issues. But even more seriously, it was a clear attempt to circumvent the policies, procedures, and shared governance with academic bodies and committees of the university.

Registration will begin in a matter of weeks for the summer and fall semesters. This must be addressed immediately before any more students are “admitted” under these conditions. I will be away for several days on an earlier planned trip but will be available by email and cell phone.

The Banner printouts for the 50 students [were attached to the original letter]. 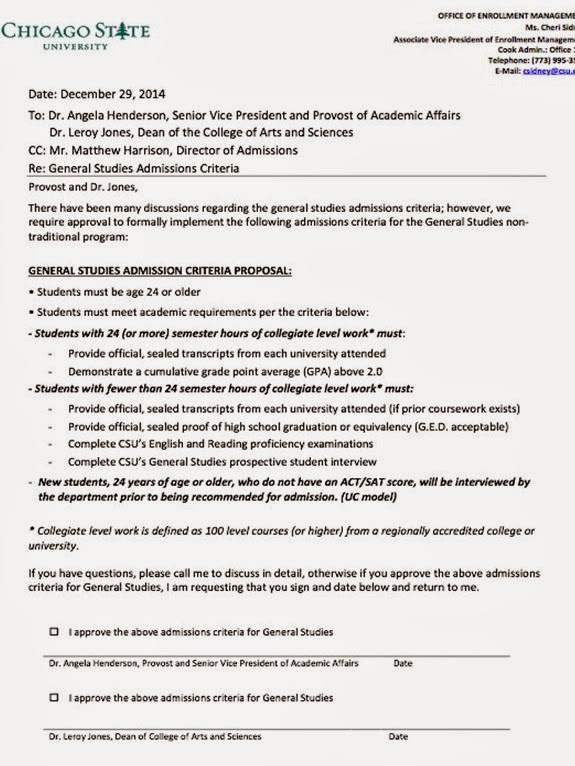 Have we updated the catalog to include the corrections related to General Studies? I spoke to Provost and she stated that our course should be that of correcting our catalog and not her signature.

Please advise as to where we are in the process.

CSU - We meet you where you are!