How the Watson Administration Treats Chicago State's Tenure-Track Faculty: Use Them then Screw Them

On of the administrative practices that has basically escaped examination is the Watson gang’s contempt for personnel action deadlines. Even a cursory look at how they perform their duties in this area reveals again the utter incompetence of this administration. We already know that it took a grievance last year to force the administration to honor its contractual obligation to grant sabbaticals, but their failure to give even lip service to personnel obligations mandated by the contract and their own policies starkly sketches the contours of their disdain for our tenure-track colleagues. Our administrative motto might be: "use them if you must, screw them when you can."

As many of you know, contrary to customary practice and in contravention of its own personnel action policies, the administration last year apparently failed to notify in advance of the May board meeting any faculty who had earned tenure. As this year’s deadline for administrative notification of tenure recommendations approaches (April 21, 2015), there seems little reason to expect that the administration will act differently this year.

In addition, this year for tenure-track faculty in the midst of their probation, the university has, for at least several faculty, failed to provide status notification for either promotion or retention. Despite a December 15, 2014 date for retention announcements, faculty have still not been notified. Despite a January 21, 2015 date for promotion announcements, faculty have still not been notified. These unwarranted and inexplicable delays are simply unconscionable.

During my probationary period at this university, the administration scrupulously adhered to the personnel action deadlines. When the time came for the board to vote on my tenure, I already knew that the administration had made a favorable recommendation. The timely notification did much to reduce the understandable anxiety associated with the probationary process.

For those unfortunate faculty who are in the current tenure process, no such relief is forthcoming. Imagine waiting three or four months past the deadline to learn your fate—will you be retained or on a terminal contract? The utter lack of qualifications of anyone in this administration to judge any faculty member’s performance notwithstanding, failure to notify persons of administrative personnel decisions creates unnecessary anxiety and in the case of those faculty not retained, the late notification may put them at a distinct disadvantage in the job market.

As far as our administrators are concerned, the only reason for the existence of staff, faculty and students seems to be the furtherance of the interests of Wayne Watson and his regime. As little more than props, staff, faculty and students frequently wait for incompetent administrators to make other important decisions, often with necessary paperwork languishing in an office waiting for nothing more than a signature. In the past few years, Wayne Watson has centralized operations under his control with the result that almost no one else can make a move without his approval. As a result, ignorant, capricious and often disastrous administrative decisions abound.

The scorn with which our administration treats all Chicago State’s faculty is magnified in the case of our tenure-track colleagues.

Here is the personnel action timetable for 2014-15: 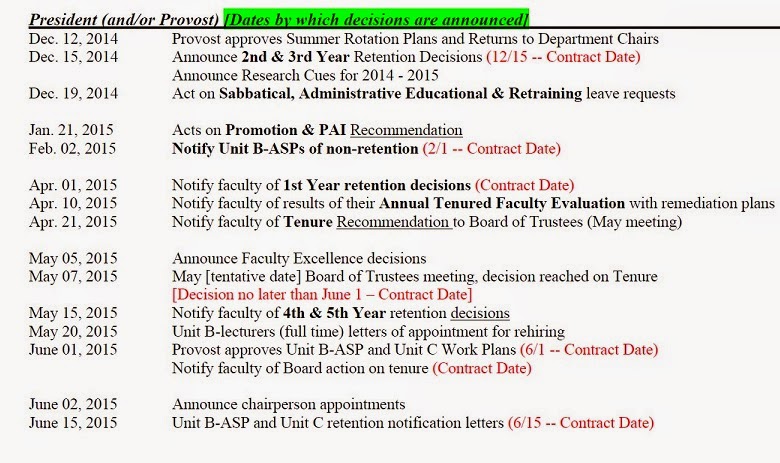 Posted by Robert Bionaz at 3:32 PM