Some Thoughts About The Futurepast

So our Potemkin Village rituals continue. To wit, the Provost’s Breakfast event no doubt touting her outstanding leadership and readiness to become the interim president when the current placeholder finally leaves. For long time readers of this humble attempt at keeping the community informed you will recall the various antics of the Provost.
It started with her hiring when she indicated on her job application that she expected to complete a Ph.D. before she had even gotten UIC Institutional Review Board approval to conduct the dissertation research on which the project would be based. This misrepresentation was probably the first clue to her competence. The next was the scandalous decline in enrollment experienced on her watch and the cancerous growth of the division of enrollment management. The division grew at an inverse rate to the student enrollment.
As if her mismanagement of that division weren’t enough she was made the interim provost without having completed a Ph.D. The disregard for the quaint little customs of the academy, like having appropriate credentials, was certainly noticed by faculty and students. That appointment began the disintegration of the academic affairs division. The first indicator was the move of the provost from the academic affairs area to the president’s suite. The elimination of the boundaries between the president and provost was a harbinger of further decline. Her appointment then evolved into a months long wait to see if she actually finished a doctoral program. Finally, in December of 2013 the dissertation was discovered on a public website at UIC. My distinguished colleague thoroughly reviewed that document and found it to be plagiarized. Having an ethical obligation to report such gross academic misconduct, he submitted a quite thorough report to the Graduate College at UIC. The Chicago Tribune submitted the document to three recognized national experts and they concluded it was plagiarism. The editorial board of the Tribune concluded it was plagiarism. I reviewed the document, checked sources and concluded it was plagiarized. My review wasn’t nearly as thorough as my colleague’s and it was clear that this work product should never have been approved. Then there were the ethical and procedural problems with the dissertation. The candidate’s direct supervisor, who has a material impact on the student’s financial and employment situation, was listed as a member of the committee and the candidate did not have the required number of Graduate College faculty on the dissertation committee. All of those deficiencies were brought to the attention of the UIC Graduate College. The outcome of that was a lawsuit filed against the university by the candidate alleging slander and libel. A review by a “hearing” officer concluded that mistakes had been made, (passive voice; who made the mistakes?), and Henderson was allowed to revise. That was curious because the document had already been approved. After the “fix’ of the situation, likely involving a local attorney and the now retired chancellor, there was the sham search for a provost and after spending $100,000 on the same search firm that found the university the current president, she was identified as the best candidate in national search.
Loyal readers, I know it is difficult to suppress your laughter at such an assertion, but take a deep breath before you continue reading. I am sure some former administrator in an exit interview told Watson that it would be a mistake to make Henderson the Provost. Of course that counsel was not heeded. If we follow the performance of Henderson to date, she has cut the highest number of courses during each of the semesters of her tenure. No other chief academic officer has eliminated the number of courses that this Provost has. She brought the skills of driving enrollment down from Enrollment Management to the Division of Academic Affairs and now students worry about their ability to take courses they need to graduate in a reasonable time frame. Faculty contracts go unsigned for weeks. Documents in the procurement system go unauthorized. Travel authorizations for recruiting purposes go unsigned. The division is in free fall because the current office holder has no idea how to do the job. Playing at Provost is not the same as being the Provost. But when you have never been university faculty, gone through personnel processes, earned tenure, been a department chair, been a college dean, then the explanation for your professional incompetence and failure is obvious.
So with so little getting done at the university, it begs the questions, what is her time spent on and why is no one else outraged? It might be getting spent on the security for the provost. If you read the email message below, you will see that virtually round the clock security was being provided because of the "pest", aka Willie Preston, and his ‘threatening’ behavior. It doesn’t really matter that her allegation of stalking was later found to be false and dismissed ab initio by a judge but the regime never lets facts get in the way of their twisted narrative. And how much in overtime was spent on this farce? 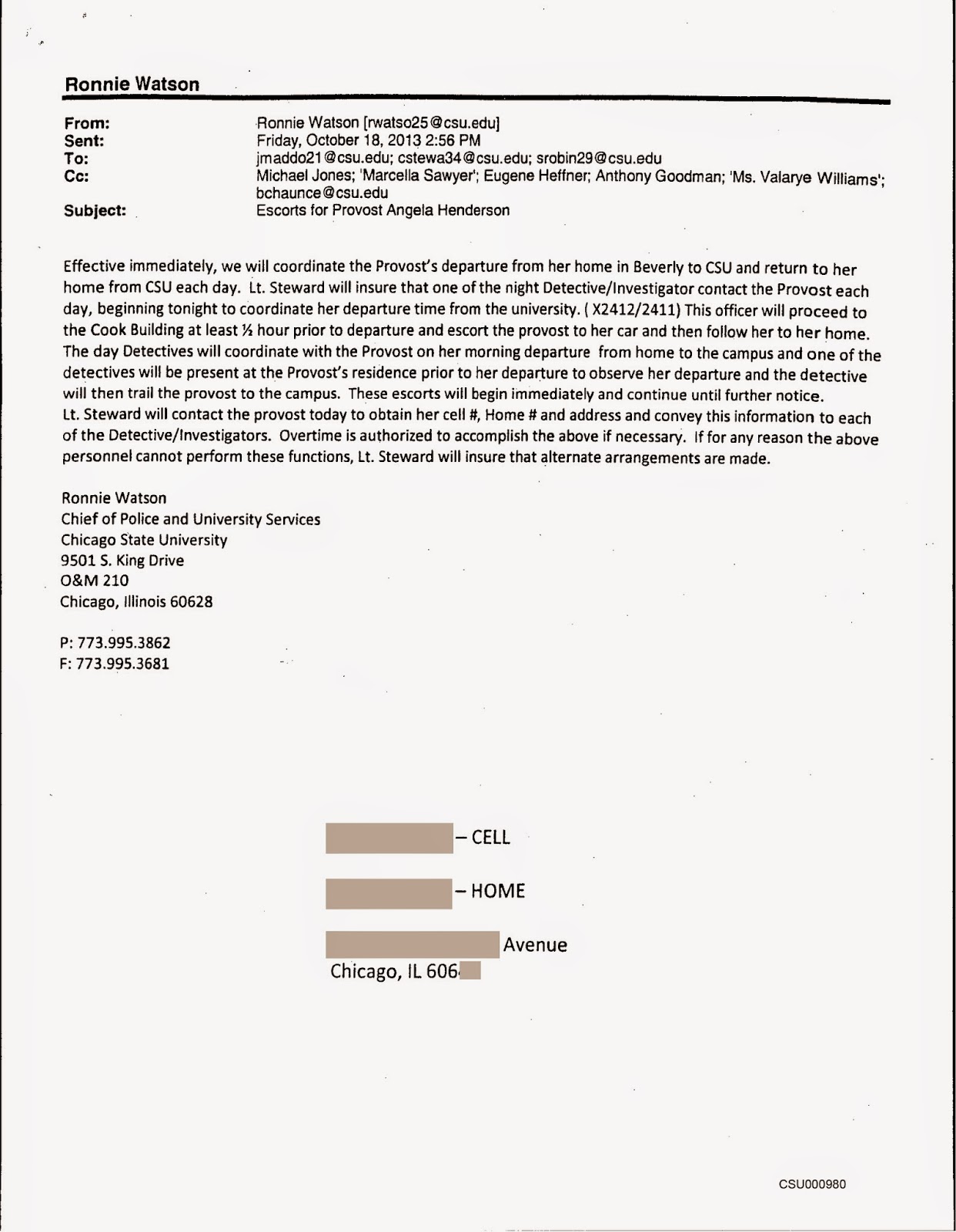 The time is being used to cancel meetings and other events. The recently scheduled Academic Affairs Town Hall Meeting was cancelled less than 90 minutes prior to its start. Before being barred from the Provost Council Meetings, I observed that roughly half of those weekly meetings were actually cancelled.
Cancelled meetings, a plagiarized dissertation, total absence of professional qualifications, unsigned contracts, cancelled courses, absence of planning for facilities upgrades, catastrophic enrollment declines, and the mistaken belief that faculty will mistake activity and "sharing" for accomplishment are the defining characteristics of this provost. When will she stop playing at being an administrator and really serve the university by departing before more damage is done? When will the president stop foisting her upon the university as a credible interim president and just go away?
Posted by Phillip Beverly at 11:00 AM