The Watson Slime Machine: The Price Tag for this Failed Presidency Is Going to be Enormous

It seems eminently reasonable to argue that the Watson administration at Chicago State is the most dishonest and corrupt administration in American higher education. The mounting evidence of the lies of omission and commission by upper level administrators in a variety of venues is simply part of a pattern of misconduct that combines incompetence and dishonesty with a pathological desire to destroy the administration’s “enemies.”

Unfortunately for the frauds in the Cook building, they are no longer able to operate in the shadows. The successes of Willie Preston and James Crowley in Circuit Court represent major victories against the Watson slime machine. Watson and company have been publicly exposed as the vindictive liars they are and the exposure of their activities in both instances shed light on the enormity of their perfidy. Ultimately, the unwillingness of Chicago State’s Board of Trustees to end this corrupt enterprise will cost the taxpayers of Illinois dearly.

The Willie Preston story includes trumped-up judicial charges to expel him from the university, uncorroborated statements by Angela Henderson to obtain an Order of Protection that should never have been granted and trumped-up criminal charges. All these actions taken by the Watson administration in an effort to silence Preston. After two arrests and a costly effort to clear himself of these bogus allegations, Preston’s complete exoneration by the Cook County Circuit Court underscores the falsity of the charges lodged against him by Chicago State administrators.

Although Angela Henderson served as the point person for the administration’s attempt to destroy Preston, Wayne Watson found time to involve himself in the charade by writing the following letter to Assemblyman Ken Dunkin. The letter is quintessential Watson; disingenuous and dishonest, with a dash of ass-kissing for good measure: 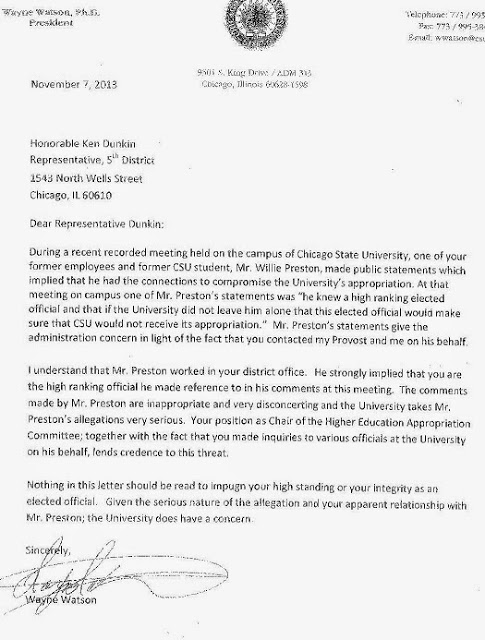 I wonder if it is really necessary to point out the ridiculous nature of this communication. First, an expelled student has the requisite political connections to damage the university’s financial position? Idiotic. Second, if Preston was so well-connected, why did he submit to expulsion? Why not simply have his “high ranking official” friend intercede on his behalf? This letter positively drips cynicism and underscores the limited intellectual ability of its author.

Certainly, the administration’s attempt to ruin Preston’s life mirrors its efforts to do likewise to Jim Crowley. In his August 2014 opinion, Circuit Court Judge McCarthy acknowledged the vindictiveness and dishonesty of the Watson administration. Here are the salient passages: 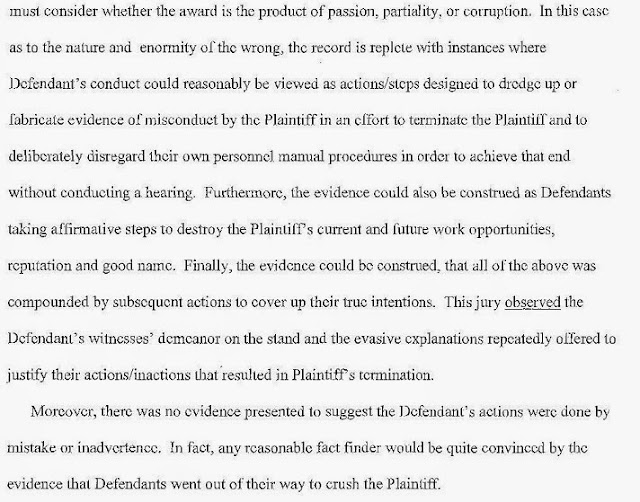 The Crowley jury certainly repudiated the administration’s position. Deliberating for a short time, the jury returned a verdict for Crowley and awarded an amount of damages they felt reflected the severity of the wrong done by the Watson administration. As of this date, the appeal of this case drags on and the amount of the judgement increases daily. I estimate that it is now in excess of $4 million and will undoubtedly exceed $5 million when the appeal concludes.

Of course, Tom Wogan claimed in February 2014 that the university’s “insurance policy will cover the damages.” As one of the major purveyors of nonsense on behalf of the Watson administration, is it possible that Wogan really believed that? Or was he told to say that by the demonstrable liars who populate our upper administrative ranks? No matter, the February 2014 statement is rendered false by looking at the university’s liability coverage.

I recently obtained a copy of Chicago State’s liability policy, which the administration has refused to provide in response to FOIA requests (the administration’s obvious contempt for FOIA is a post in itself). The policy seems to confirm my belief that the university’s liability insurance will not cover the award in the Crowley case. In addition, if the lawsuits by Glenn Meeks and Lashondra Peebles succeed, those damages will not be covered by the university’s insurance.

In common with other types of insurance coverages, this policy contains numerous “exclusions” in its coverage. These exclusions are specific circumstances for which the insurer is not liable, the liability is borne by the insured. Scrolling down the list, we come to exclusion Q which reads (bold in original):

As many of you likely remember, the Crowley verdict affirmed the allegation of wrongful termination. As a result, the jury award falls under the policy exclusions and the insurance company has no obligation to pay the damages.

This is Watson's legacy. He has done virtually nothing but damage to Chicago State and will ride off with another lavish pension whenever his execrable term here concludes. The state legislature will have to come up with the money to pay the price of his presidency. Will the university survive? Making all this possible is a Board of Trustees who have willfully ignored the myriad misdeeds and failures of this administration. Why?
Posted by Robert Bionaz at 1:26 PM