Yesterday’s Board meeting featured the usual administrative bullshit, an interminable amount of time spent in executive session, and surprises at the end from Nikki Zollar.

First, the enrollment management report featured almost nothing about enrollment, save the acknowledgement that our spring count is 4818 (now 4794 after at least 24 students withdrew from the university). Anthony Young again asked when the decline would stop. Cheri Sidney again parroted the “quality over quantity” snake oil the administration is now peddling and blew more smoke at the Board Chair by telling him the same thing both she and Watson said last semester: the enrollment will “level off” in the Fall. Neither Young nor any other Board members followed up with additional questions.

After more than two hours in executive session, discussing who knows what (Watson’s willful deceit over our financial aid malfeasance, his growing collection of high-profile lawsuits, and the looming presidential search are all potential topics), the Board emerged to make several announcements about the presidential search.

First, it seems like they have contracted with a reputable search firm, Greenwood, Asher and Associates out of Florida. If you are interested in this part of the search, take a look at their web site. Perhaps they will be able to find someone other than a hack from Chicago, we will see. Next, Zollar announced that the search committee’s composition would not be finalized until April 1, with the first meeting expected around April 13.

Although Zollar said that most of the committee had already been selected (although apparently not contacted about their willingness to serve, really?) she revealed that no faculty had yet been added to the committee, that she expected that to be done by the end of March. According to Zollar, the names of the non-faculty members of the search committee would be put on the university’s web site on Monday. That will certainly be an interesting list.

Late yesterday afternoon, the Faculty Senate received a positive response from Zollar to our letter of February 23. That letter has been distibuted to the Senators and I anticipate will be shared with the university community by the end of the weekend.

Last night, I received a link to this article which describes Chicago State’s placement on another list we do not want to be on, the top ten whistleblowing/retaliation events of 2014. Once again, Wayne Watson’s malignant management style has catapulted the university into the public eye in ways that are hardly conducive to attracting students. It seems that— given the meager list of his “accomplishments” at Chicago State and the steadily increasing number of revelations of his horrific management—a case might be made for his failure as Chicago State’s President (going out on a limb with that assertion). Again, a hearty congratulations to Wayne and his clowns for their consistency. 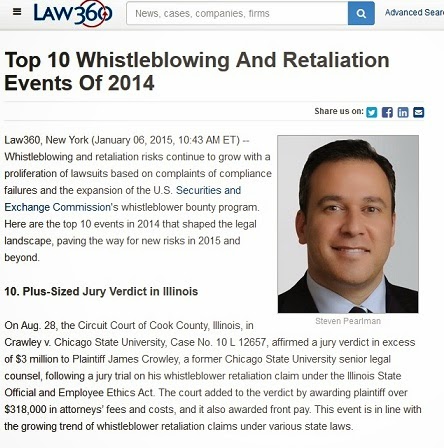 For some reason, the court documents of August 28 misspelled James Crowley's last name.

Posted by Robert Bionaz at 5:52 AM