As the sham search for the next Chicago State President gets underway, it seems useful to compare the start of this search with the 2008 search that resulted in so much controversy. Thanks to the existence of a memorandum written on February 6, 2008, by Board Chair Betsy Hill, it is possible to compare the Board’s attitude toward Chicago State’s faculty and staff in 2008 with its contemporary stance. What I think comes through clearly is the deterioration in the relationship between the CSU administration (as represented by Board member Nikki Zollar) and the staff and faculty at Chicago State.

Notably, in contrast to the 2008 search, the committee described by Zollar is ostensibly not simply an advisory body. Zollar’s memorandum of February 18, 2015, described the “Presidential Search Committee” rather than the “Campus Advisory Committee” delineated in Hill’s memorandum. However, n 2008, Hill was careful to give at least lip service to the concept of “fairness” and the importance of participatory democracy in the selection of search committee members. Zollar is not troubled by such insignificant concerns.

In 2008, the Advisory Committee included 17 members, all but 4 elected by their peers. Indeed, Hill’s memorandum demonstrates that of the 17 members, 8 came from Chicago State staff and faculty, with the sitting Provost names as Chair of the Advisory Committee. The Hill memo indicated that only 2 administrators would serve on the committee although the Board would appoint 3 additional members in the interest of “adequate representation of the CSU community.” In Zollar’s 2015 memo, no one is elected to serve on the Presidential Search Com mittee and only 5 faculty and 2 civil service employees represent the staff and faculty of Chicago State. Instead of elections, Zollar gives the Faculty Senate one week to submit “nominations” for the committee which will then subsequently be scrutinized then “selected” by Zollar (read the Chicago State administration).

So, if no one is elected to the newly formed Presidential Search Committee, how will its members be chosen? Recently, a student closely associated with Watson approached two other students asking if they would be interested in serving on the committee. Based on this example, it seems fair to assume that persons (perhaps one or two College Deans or Departmental Chairs) chosen by Watson for their loyalty will ask pre-screened faculty members to serve. Rather than the uncertain outcome inherent in the 2008 elections, the composition of this search committee seems predictable—most likely only persons amenable or vulnerable to the Watson regime. A truly Byzantine method of selected persons to sit on this important committee.

Of course, we must wait until tomorrow’s board meeting to discover the Search Committee’s makeup. The Board will also reveal their choice of a search firm on which to waste the school’s limited resources. Instead of simply telling the university community that the new president has already been chosen, the Chicago State Board will treat us to this excruciating Kabuki performance for the next several months. This is a fixed search with a totally predictable (and disastrous) outcome for Chicago State.

Here are the pertinent portions of the two memorandums for your perusal: 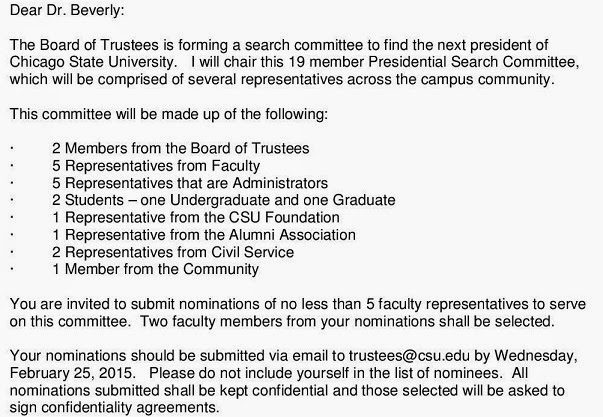 In conclusion, it might be useful to remember that the 2008 search, which began promisingly enough, ended in acrimony and resulted in arguably the worst possible selection for the university. Given the way this 2015 search is beginning, I think it likely that the process will be even more contentious and the end result will be a president even worse (if that can be imagined) than the one who is leaving. I urge anyone interested in cynical politicking to come to tomorrow’s board meeting to see what the Chicago State Board of Trustees really thinks about the people in the CSU community.