New Audit Report Out: An Increase in Audit Findings, Particularly in Hiring--Soon More Lies from the Watson Administration. Why Does Cheri Sidney Still Have a Job?

Of course, our administrators cannot be bothered with such mundane matters as Chicago State’s compliance integrity (or enrollment, fund-raising or other boring day-to-day operational components of a university). After all, Watson and his stooges spend much of their time hiring cronies, destroying the university’s academic credibility, losing huge court judgments, meddling in curriculum and degree programs, rigging student elections, ignoring the wishes of the university’s faculty and staff, lying to the Board of Trustees and just about everyone else they talk to, and, most important, planning ways to trump up false charges of misconduct against students and faculty in order to silence dissent.

The most recent audit details how the Watson administration ignores the university’s policies in order to hire his cronies, then when caught red-handed by auditors, tries to blame someone else. Is anyone still fooled by this sophomoric lying? In fact, as demonstrated in the most recent compliance audit, here is how Watson and his lackeys hire their friends and cronies and in the process inflict serious damage on the university.

Auditors selected 10 employees hired during fiscal 2013 and 2014 and found: no evidence that the university verified employment history for any of the 10 employees; no evidence that the university verified educational credentials for 5 of the 10; one of the hired employees (Tyra Austin) “did not meet the minimum education requirements that were posted in the job opening description. The University did not provide any evidence from the time of hire to explain why the education requirements were not an actual prerequisite.”

In their usual cowardly fashion, the Watson administrators attempt to shift the blame for this finding onto the search committee members who they claim “did not consistently adhere to the policies and procedures for pre-employment verification.” Unfortunately, the Human Resources search policy asks search committee members only to “review and evaluate the credentials of all applicants,” using PeopleAdmin. Reviewing and evaluating is different from verifying, which is the province of Human Resources. Nice try.

This idiotic administrative attempt to deflect blame apparently did not fool the auditors who found that the University’s failure to perform “required background checks,” and its “failure to fully document hiring decisions” carries the risk of hiring unqualified persons and “creates a lack of transparency over the hiring process.” Which, of course, is the whole point. 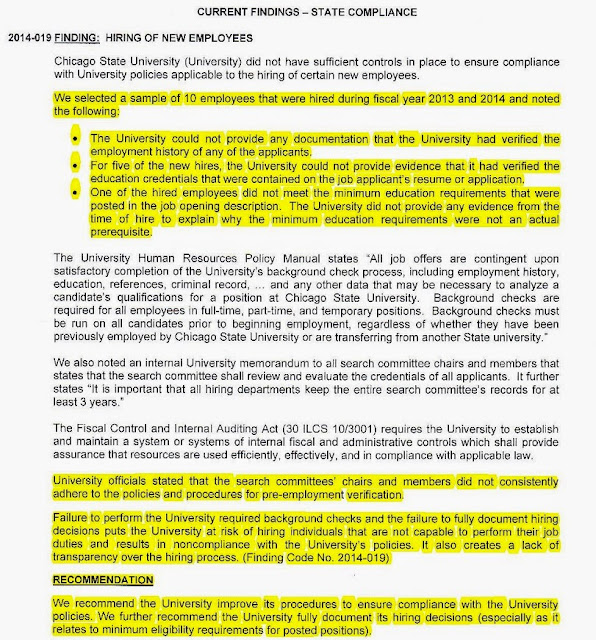 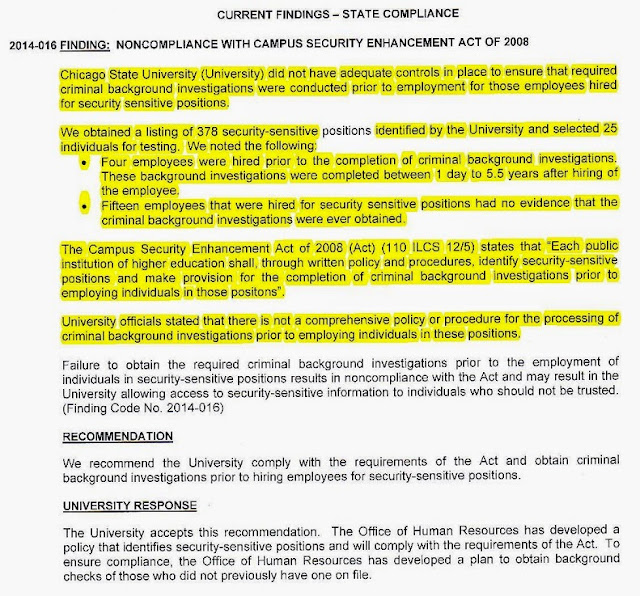 While these findings certainly demonstrate how the Watson administration creates the conditions to make gifts of taxpayer funds to their friends and cronies, it is unfortunate that the auditors do not look further back into Chicago State’s employment practices. The case of Cheri Sidney's falsified resume is certainly as egregious as Tyra Austin’s failure to hold the minimum requirements for her position.

As a reminder, Sidney, as the president’s girlfriend, hardly even needed to apply for her original cushy $90,000 entry-level administrative job. However, apply she did, and for some unfathomable reason, blatantly lied on her resume for the position, claiming to have a Master’s Degree from DePaul. Instead, her only educational qualifications were basically an on-line Bachelor’s Degree in nothing in particular. To jog your memory, here are the relevant documents. First, her resume from 2009, next, the verification of her degrees from DePaul University: 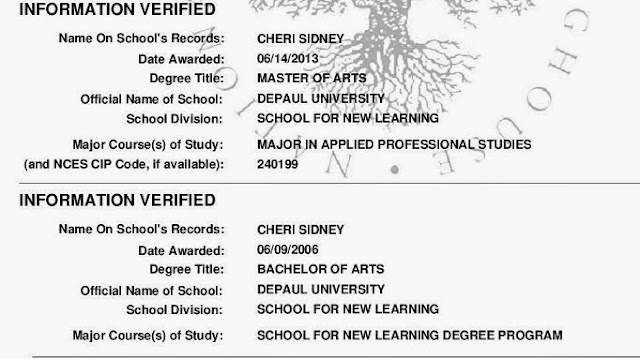 Recently, Sidney again appeared before the Board of Trustees to explain why Chicago State’s enrollment took another plunge after both she and her boyfriend had assured the Board enrollment would “level off” in Spring 2015. She made the same promise to the Board for Fall 2015. Although the university’s Human Resources policy clearly indicates termination as the discipline for falsifying official records, Sidney continues to enjoy a six-figure salary for the type of consistent failure that should get anyone fired.

The Watson administration will obviously spin this audit finding increase, or will they? Given Watson's efforts to prevent the Board from finding out about Chicago State's provisional financial aid status, there is a likelihood that he will simply say nothing and order his cronies to keep their mouths shut as well. After all, lying is what Watson does best and it is a rhetorical strategy that has served him well for a number of years. No reason now to change what has been so successful.

Posted by Robert Bionaz at 2:08 PM