Thomas Wogan Says What We All Already Know: Some Persons are Damaging the University's Image

This communication from Thomas Wogan came last night. Before I discuss his memorandum, I think it is important to note that he no longer works for the folks at Enrollment Management. Mr. Wogan now works directly for Watson in the President’s Office. Thus, he is certainly in a position to know “insider” things. He makes a number of important points in his recent dispatch. 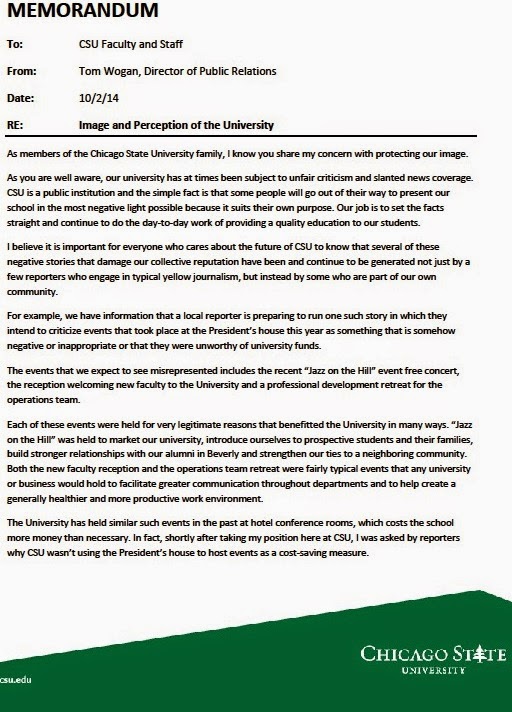 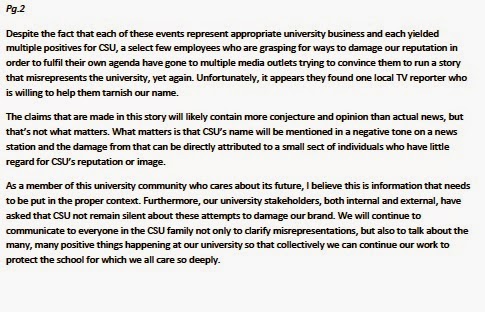 In his third paragraph, Mr. Wogan observes that “several of these negative stories that damage our (Chicago State’s) reputation have been and continue to be generated not just by a few reporters who engage in typical yellow journalism, but instead by some who are part of our own community.” In the first paragraph on page 2, Mr. Wogan notes the existence at Chicago State of “a select few employees who are grasping for ways to damage our reputation in order to fulfill their own agenda.” He continues his brilliant analysis on page 2’s second paragraph, writing that “CSU’s name will be mentioned in a negative tone on a news station and the damage from that can be directly attributed to a small sect of individuals who have little regard for CSU’s reputation or image.”

I agree completely with Mr. Wogan’s analysis. However, he neglects to mention which individuals he believes are damaging the university’s image and tarnishing its “brand.” In a modest attempt to flesh out Mr. Wogan’s argument, here are the “select few” who I believe have generated most of the “negative stories,” and “damage[ed] our reputation,” while displaying “little regard for CSU’s reputation or image.”

First, we have this fellow: 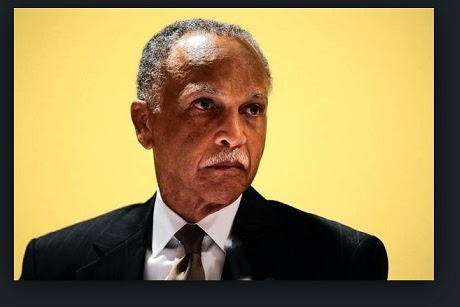 As we all know, his capacity for generating embarrassing and negative news reports is unparallelled in academia. Just a few samples: his administration's past and current efforts to stifle free expression on campus which have generated and continue to generate embarrassment and national ridicule for Chicago State, his dishonesty--noted by a judge (and jury) in the Cook County Circuit Court which, when coupled with his administrative misconduct and vindictiveness, has already cost the university more than $3.8 million, an amount that continues to increase.

Then there's this person: 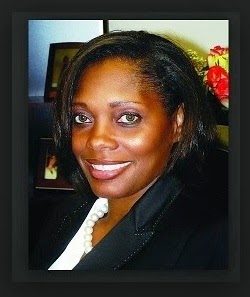 While a comparative piker compared to our first subject, this individual has done Chicago State proud by plagiarizing her doctoral dissertation then suing the university that granted her degree. The stories about these events have certainly presented Chicago State in a somewhat unflattering light. During her tenure as Vice President of Enrollment Management, the university's enrollment dropped nearly 15 percent.

Finally, flying under the radar, at least as far as a public presence is concerned, we have this administrator: Her main qualification for her original entry-level senior management position at Chicago State was apparently her personal relationship with Watson. Moving into Enrollment Management as one of its top administrators in 2010, she has been (along with the two persons previously mentioned), one of the chief architects of the enrollment disaster that has befallen Chicago State. Of course, she lied about her educational credentials when she applied for employment in 2009, an action that proved no impediment to either her hiring or her subsequent promotions.

Given his incisive investigative skills, I encourage Tom Wogan to continue his efforts to expose those persons who are so severely damaging the reputation of the school "for which we all care so deeply." After this courageous memorandum, I worry about his future here. Most important, Mr. Wogan's fearless memorandum provides a valuable insight into his character and integrity.
Posted by Robert Bionaz at 5:03 AM