So as many of you loyal readers are aware, the administration of CSU is a staunch protector of intellectual property rights. You may recall that Patrick Cage sent your humble narrator a "cease and desist" letter for this blog's imaginary trademark infringement. As the protector of trademarks, I would have expected that the university might have been a bit more sensitive to using the image of Kermit the Frog, which is owned by the Disney Corporation. The Muppets were acquired by Disney in 2004. It only took me about two minutes to find this information and I'm not an attorney. I imagine given the corporate culture of Disney they might not appreciate the humor or value of using their images in signs prominently displayed on campus. Hopefully, no one would email them at tips@disneyantipiracy.com or call the Walt Disney Anti-piracy Group at (818) 560-3300 to report this possible copyright infringement. And that refreshing beverage that Kermit is seen drinking is also the intellectual property of the Lipton Tea Company which is owned by Unilever. Even on the Lipton Tea website that has Kermit the Frog on it, there is a copyright notice. The arrow is pointing toward it. Given the university's diligence is protecting trademarks it doesn't have, I would have thought they would be equally diligent in protecting trademarks of others.

I was asked recently about who Thomas Sumner is and why is he investigating the incident at the May 2014 Board of Trustees meeting. What I have gathered is that Mr. Sumner is a retired Criminal Court judge who attended local schools and has ties to the West Side community. Apparently, he was asked by the Board of Trustees to "investigate" the arrest of Jokari Miller at the May BOT meeting. Mr. Miller was arrested after not removing his baseball cap. During the course of the arrest, a choke hold was administered by an officer of the CSU Police Department. Other details of this incident are sketchy, like why the video camera in the Library that may have captured this incident was removed days later and whether there was email correspondence between administrators prior to this incident planning to arrest Mr. Miller. If this is simply a fact finding process, why not have the CSU Police Department investigate, unless there is a possible conflict of interest or maybe there are plans to place the responsibility on the officer involved in the arrest. If that were the case I would imagine his continued employment could be in jeopardy. I wish Judge Sumner well in his quest to uncover the truth in this most unfortunate incident, an incident likely to cost the university several thousands of dollars.
Finally, I was dismayed by this email. 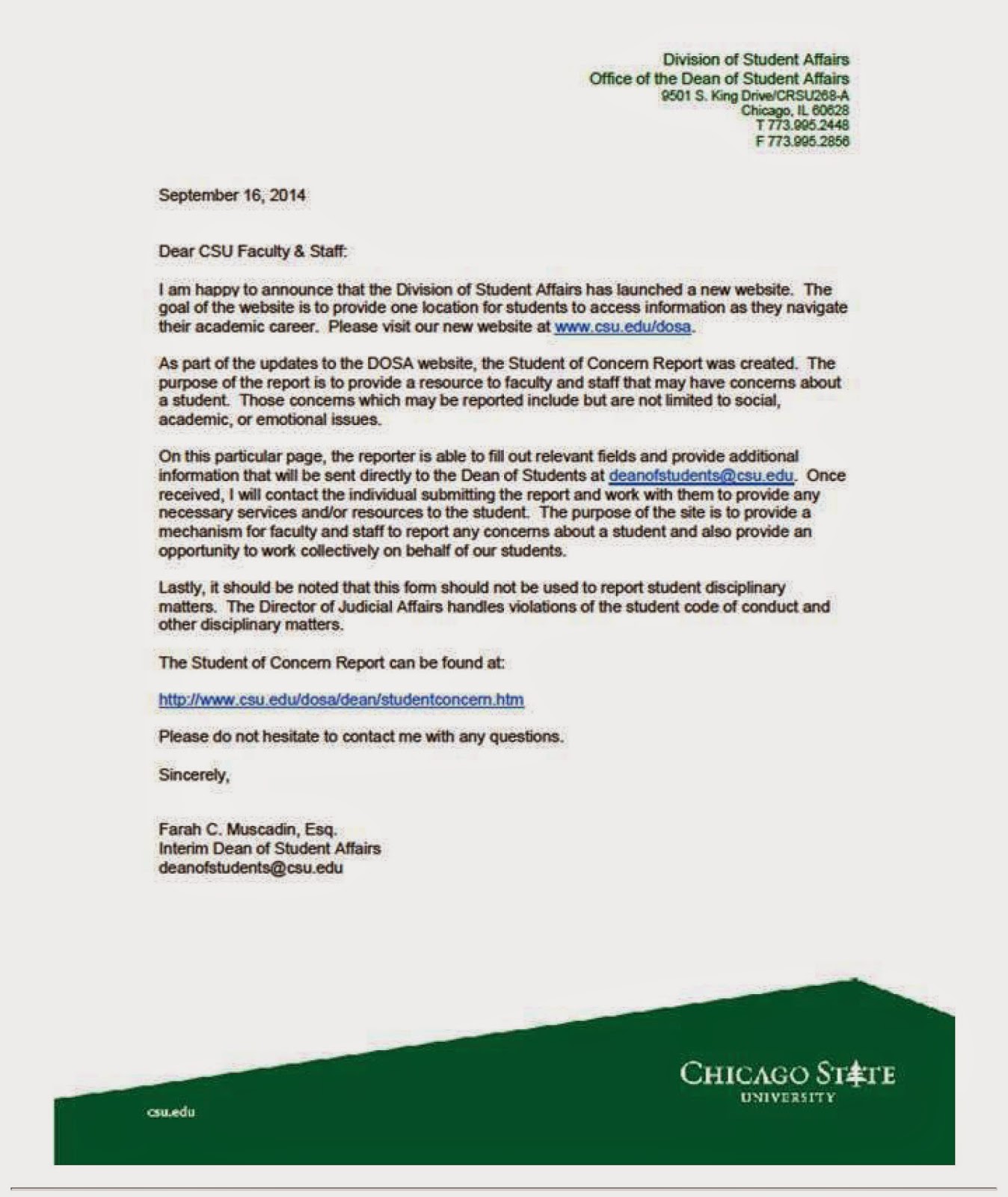 Though I am thrilled that a new website has been launched I am more than a bit concerned that a police state mentality is emerging from the Division of Student Affairs. To wit the Student of Concern Report is very disturbing. The first thing that came to mind were the possible Family Educational Rights & Privacy Act and Americans with Disabilities Act violations that could emerge as a result of implementing this process. Second is the presence on a university web or mail server of sensitive student information of a nature that may or may not be true. Given that Home Depot and Target have been hacked this year  with sensitive information from their servers stolen, I have little faith that this university could protect such information from a similar fate. I could only imagine some sinister person finding out that a student could be experiencing some non-school related issue and a copy of that student of concern report ends up on Facebook or gets tweeted out to thousands of people.
Additionally, after discussions with several of my colleagues, I agree with them that I am not qualified to comment on the "emotional" or "social" issues referenced in this memorandum. I do not possess the clinical expertise to make a determination. If a student presents to me that they are suicidal, I am going to suggest that they go to the Counseling Center. I will even walk them over there if they want me to. All of this makes me curious as to whether the Director of the Counseling Center is actually behind this idea. I wouldn't imagine so, because as a clinician she surely must understand the risks inherent in a scheme like this.
This is not a good idea!
What is the policy that faculty and staff should follow and why isn't that being adhered to? What are the resources available to students and where is that information? That would be far more helpful than the Dean of Students acting as a clearing house for student issues noted by faculty. With the revolving door in the Dean of Students office, with the most recent occupant having no university student affairs experience of any kind, I'm not surprised such a bad idea would emerge. I sincerely hope no sensitive information is floating in the digital domain of CSU. Unsecured information about students could lead to audit findings, Department of Education investigations and lawsuits from students who may not want sensitive information recorded on university computers without their consent.
Most of the negative that gets reported about CSU is avoidable. Trademark and copyright infringement is avoidable. Breach of student privacy is avoidable. Students being arrested for wearing a baseball cap at a public meeting and then being subjected to a choke hold is avoidable.
So when is the university going to start avoiding the avoidable???
Posted by Phillip Beverly at 8:00 PM