Wayne Watson's Past and Future Enrollment Failures: A Faculty Sleeps While a University Flounders 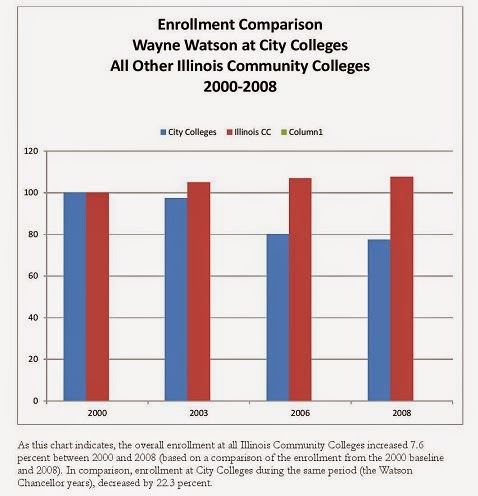 This chart compares Chicago State's 2010 to 2013 enrollment under Wayne Watson with two other data sets: 1) 58 schools categorized either as "peer" institutions by IBHE, or non research public institutions in Illinois and its six contiguous states; 2) 35 schools, mainly HBCU's, that belong to the Thurgood Marshall College Fund. Again, the baseline 100 percent enrollment is determined by the 2010 figures, with the enrollment changes being expressed as percentages of the 2010 enrollment: 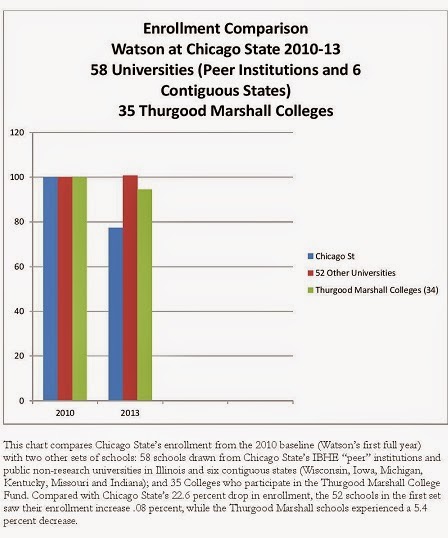 Finally, for those of you planning to spend the next few years working at Chicago State, this graph plots the enrollment declines that have occurred since 2010 (with the most recent 2014 data included) and offers projections of future declines based on extant data. As you can see, based on this projection, by the end of Watson's disastrous presidency in 2016, the school's enrollment should decline to around 4,000. Obviously, the question of how long the state will allow Chicago State to exist as it hemorrhages students is one that all of us should consider. The following graph comes courtesy of our colleague Tom Lyons:

It seems fair to say that our university is experiencing an existential crisis. The question is still, will we as a collective faculty do anything about it? Will we awaken soon? Our recent history provides no reason for optimism.
Posted by Robert Bionaz at 11:15 AM