Can you guess what that number represents? It is the official fall enrollment for 2014. This is 490 fewer students than enrolled in Fall 2013, 18 fewer students than enrolled for Spring 2014. This figure represents an 8.6 percent drop from last year, a 14.7 percent decline since 2012, a 24.3 percent slide from 2011 and a 29.2 percent decrease since 2011. In human terms, Chicago State now enrolls 2151 fewer students than it did four years ago. The yearly bleeding: 480 students lost in 2011, 775 in 2012, 406 in 2013 and 490 this year. Please, let us hear from all those Watson cheerleaders who want to tell us that all is well. Please speak to us about Watson’s “vision” for Chicago State. Please talk about how important it is that we not criticize this man or his administration. Does anyone in this state care about what is happening at Chicago State? I cannot imagine any other educational institution in which this kind of abject failure would be tolerated.

While the raw totals are significant and alarming, embedded in a recent report from Enrollment Management is even more disturbing data that provide a glimpse into the future of this university. Simply put, the Watson administration has done so much damage that the long-term effects will be profound. Here are some of the numbers from Enrollment Management. First, the raw enrollment figures (these are from September 22, when the official count was 5208, they should not be significantly different in final form).

New Students (Freshmen and transfers) down 98 (93 percent of the goal). Losses in every college but Arts and Sciences and Pharmacy. How about returning students? Disastrous, down 568 overall, with losses in every College. I think catastrophic might best describe this round of enrollment efforts. It looks like students do not want to come here and many of those who are here cannot wait to leave. 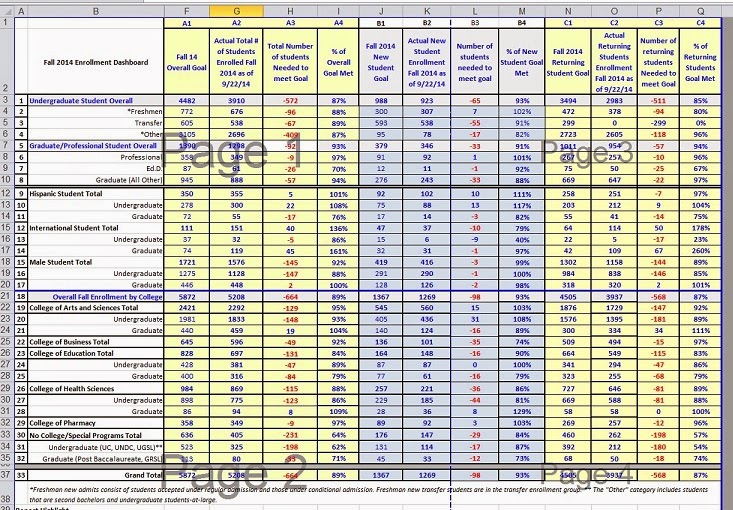 Enrollment Management also provided a statistical breakdown of our current graduation and retention information. This data offers a frightening vision of the future at the post-Watson Chicago State. Some of what follows will be speculation, based on my interpretation of the retention numbers. First, the years 2007, 2008 and 2009 represent Fall enrollments that occurred in the final two years of the Daniel presidency and the one year of the Pogue interim presidency. The years 2010 through 2013 are the admissions with the Watson management “team” basically in place. Note how the numbers have decreased each year from Fall 2010 to Fall 2013. The number of first-time full-time Freshmen declined 57 percent during that period (523 to 225). According to unofficial figures from Enrollment Management, the Fall 2014 numbers show a slight increase, to 249. If these numbers are correct, the overall decline in this student segment is 52.4 percent since 2010.

If you remember, the June letter from the Chicago State Board of Trustees that expressed their unqualified support for Watson cited increases in graduation and retention rates as one reason for their allegiance. However, first-year retention in 2014 declined by over 6 percent from the previous year’s figure, currently standing at 48.4 percent compared to 54.8 percent in 2013. Second-year retention is particularly troubling. From a high of 44 percent in 2010, the figure has dropped to 30 percent this year. 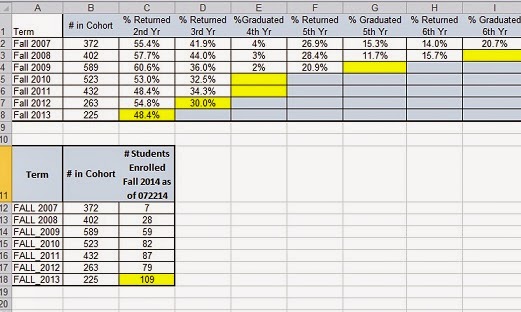 Clearly, attrition increases as a particular cohort of students gets farther along in their academic careers. It seems that for the one year the entire range of statistics are available that the graduation rate is about one-half of the second-year retention rate. While it is difficult to predict with any certainty, if the current second-year retention rates yield a graduation rate of about 50 percent, they will look like this: A slight increase this year, to around 22 percent. Then, beginning in 2015, the graduation rates will most likely descend to levels which previously subjected the university to scorn for its failure to graduate students (with the caveat that first-time Freshmen represent only a tiny percentage of the overall student population). I anticipate that the graduation rates from 2015 through 2019 will range from 15 to 17 percent. Except for the 2009 cohort, all these students will have been admitted under the Watson regime.

If any of our readers are familiar with the City Colleges, they undertook a “reinvention” campaign in the wake of the Watson Chancellorship, primarily in an attempt to repair the significant damage his regime did to those institutions. Watson’s incipient legacy at Chicago State looks to be even worse. Obviously, the school will pay for his administrative misconduct far into the future, as the spate of existing lawsuits filed against Watson and his administration (with more likely to come) work through the courts. Chicago State will be paying out claims for damages long after Watson is gone. Similarly, Watson’s regime will leave after inflicting significant damage on the academic side of the university. The retention rates demonstrate the hollowness of Watson’s claim to have “raised standards” at Chicago State and the looming graduation rate declines will put Chicago State back where it was in 2005 or thereabouts.

Clearly, it will take a prodigious effort to recover from the havoc wreaked by Wayne Watson. The question remains, will we even have the opportunity to clean up after this man? Another two years of this and the university may well cease to exist. Is that the goal of our politicians and other so-called leaders? Sometimes it seems like the only rational explanation for their inaction.

Posted by Robert Bionaz at 9:08 AM