As a follow-up to yesterday’s post on the penurious nature of our ridiculous board members, I will detail the giving by the Foundation’s Board of Directors. I will also be discussing some extremely troubling trends in the financial contributions to the Foundation under the Watson administration.

First, a bit of additional information on yesterday’s post. The amounts listed for our board members reflect personal contributions to Chicago State. In the case of former Board Chair Gary Rozier, his company, Ariel Capital, contributed $31,400 to the Foundation between 2008 and 2014. In addition, Macy Rozier, Gary’s wife, contributed $1,000 and her company, Grosvenor Investiments gave an additional $2,000 to the school. Although that does not change the total of personal contributions, the Rozier family and their respective companies contributed $34,400 since 2008.

Before I begin this analysis, I think it is important to note that Wayne Watson never takes responsibility for any of his numerous administrative failures. Although I do not know this, I suspect the well-documented fund-raising inability of this president will be treated similarly. Watson, who has an excuse for virtually everything, although he is always quick to take credit for successes in which he played no part, will probably blame the Board of Directors or the unlucky personnel in the Foundation office for his administration’s woeful performance.In fact, it is the responsibility of the Foundation to find prospective donors and for the president of the school to secure those donations through personal contact with people and companies. Imagine yourself being courted by the Foundation then experiencing our president in all his glory. Would you give money to the school? Judging from the results, the answer seems to be a resounding no.

Since 2010, Watson’s first year at the helm of the Titanic, the Board of Trustees has contributed the magnificent sum of $9,460, or $1892/year. The top year was 2012 when the board members pried open their wallets and coughed up $2050. In comparison, the average yearly contribution from the Board of Directors during the Watson era stands at $26,944.40. Given the contributions of the Board of Directors in comparison to Watson and the Board of Trustees, it seems unimaginable that Watson would try to blame anyone but himself and those fawning trustees who fall all over themselves proclaiming their adherence to his “vision.”

One interesting aspect of the Board of Directors contributions is that they fell to just over $13,000 in 2014. Is this a commentary on the leadership at Chicago State? After all, the Directors lack of enthusiasm for Watson’s clown show mirrors the decline in contributions to the Foundation since 2011. That year, thanks to the $1 million windfall from Julian Scheinbuks, the Foundation received more than $1.37 million in contributions. That followed a $1.12 million fund-raising year in 2010. Since 2011, contributions declined each year, culminating in the 2014 total of $508,901.30.

The decrease in contributions occurs across a wide spectrum of categories: giving by charitable institutions, giving by businesses and corporations, giving by other donors including private individuals. The numbers are, frankly alarming.

Although these numbers are imprecise, they give a clear picture of the trends, particularly in corporate and business giving and individual contributions. In 2008, the Foundation received contributions from at least 69 businesses and corporations. That number rose to 87 in 2009. In fiscal 2010, the first year under Watson, the number dropped to 70, declined further to 59 in 2011, 57 in 2012, then to 31 in 2013 and 36 in 2014. Thus, the number of businesses and corporations donating to the school stood at 41.3 percent of its pre-Watson level. Of the total of 36 donors, 22 had previously contributed, indicating that the people in the Foundation were doing their best to keep existing contributors as well as finding new sources of money. However, that represents a drop of 65 businesses and corporations from the pre-Watson high of 87 in 2009. What changed? Perhaps it was Chicago State’s new leadership. The drop in other and individual contributions has been even more pronounced. From a pre-Watson high of 1262 in 2009, those donations have declined to 418 in 2014, or 33.1 percent of the 2009 figure.

Some notable companies who used to contribute but who have not donated any money in the past year or two include AT&T, ComEd, Northern Trust, and of course, Ariel Investments. Looking at 2014, the Foundation received $508,901.30 in contributions, $294,451.10 from business/corporate sources, $13,118.75 from the Foundation’s Directors, $1825 from Watson and Board of Trustees and at least $61,595 from other foundations/charitable organizations. That means that Watson could have raised a maximum of $137,911.45 over and above those contrbutions. The man cannot even raise his own salary.

I have put together this little chart to visually demonstrate the unmitigated disaster this president has visited upon this university. The bars represent the percentage in each category compared to the 2010 starting point (100). As you can see, save for a brief uptick in contributions (money) in 2011, and slight increases in contributions (individual, total and corporate) in 2014, the remainder of the bars all register declines. 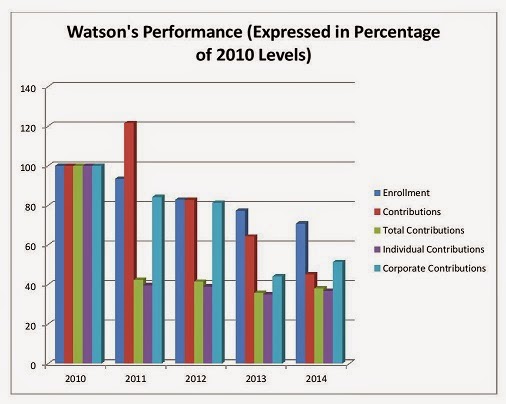