Update on the Faculty Senate Controversy

Wayne Watson does not like people who disagree with him. Wayne Watson has a documented history of retaliating against people who disagree with him, sometimes with disastrous results for the school with the misfortune of employing him (see Maria Moore v. District 508 and James Crowley v. Wayne Watson for two prominent examples). Wayne Watson and his administration are not above perverting the democratic process and rigging elections if they do not get the results they want. In May 2013, the administration voided a legitimate student election because the winning candidates were avowed Watson opponents. Now, the Watson administration has set its sights on the Chicago State Faculty Senate. They claim, with no evidence and no specific allegations of wrongdoing, that the Senate’s February 2014 election to amend its Constitution featured “irregularities” and disfranchised eligible voters. Bullshit.

The Board of Trustees does not care about Chicago State’s faculty. In fact, they do not even want to hear from them—save for those faculty in complete agreement with Wayne Watson. As a result, they believe everything Watson tells them. If he claims the Faculty Senate election needs to be investigated, they take that as gospel. After all, Wayne Watson has consistently proven himself to be infallible. Thus, the Board of Trustees declared the Senate to be invisible, no longer recognized by that august body. All because of voting “irregularities” and disfanchised eligible voters. After all, Wayne Watson told them so. More bullshit.

However, after various ultimatums from our administration and the Board, the Faculty Senate finds itself in the position of being not recognized and unwillingly participating in the farce currently playing out at Chicago State. Although the matter of the administrative demands and subsequent FOIA requests is still in the hands of the Illinois Attorney General, neither the administration nor the Board desired to wait for their decision. No worries about due process here, they just went ahead and de-recognized the primary governance body for Chicago State’s faculty.

Why? Perhaps because the Faculty Senate has been unpleasantly disposed to oppose the disastrous Watson regime. Perhaps the two no-confidence votes in Watson and his faux-Provost stung the poor man. The answer? Do away with that troublesome group and put a more amiable bunch in their place.

As previously noted on this forum, the administration seems to believe that more than 350 faculty were eligible to vote in the February election. In fact, just over 200 unit A faculty were eligible. This misunderstanding could have been resolved with a simple request from the administration. Instead, without a shred of evidence or even an allegation of wrongdoing, the administration formulated a list of six demands. Eventually, the list grew to seven, as enumerated in the FOIA request by Patrick Cage and as parroted by the memorandum from the Board of Trustees.

Since the administration is doing nothing and since the Board only seems interested in re-issuing previous ultimatums, it devolves upon the Senate to attempt to solve this brouhaha. Accordingly, this morning the Senate Executive Committee sent the following letter to the Board of Trustees. A copy of this letter also went out to unit A faculty this afternoon: 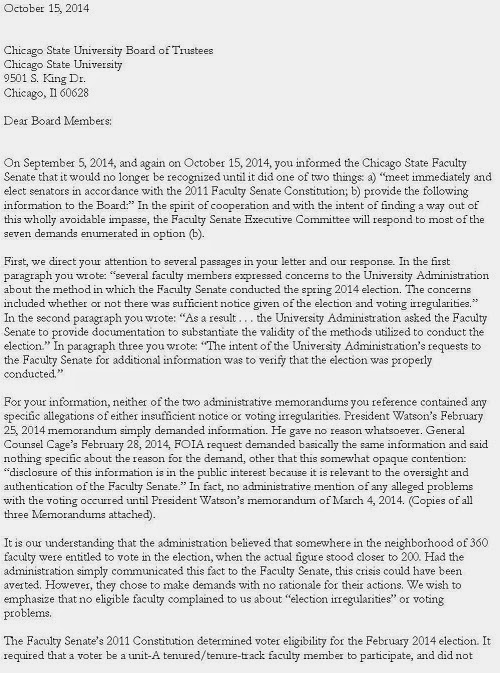 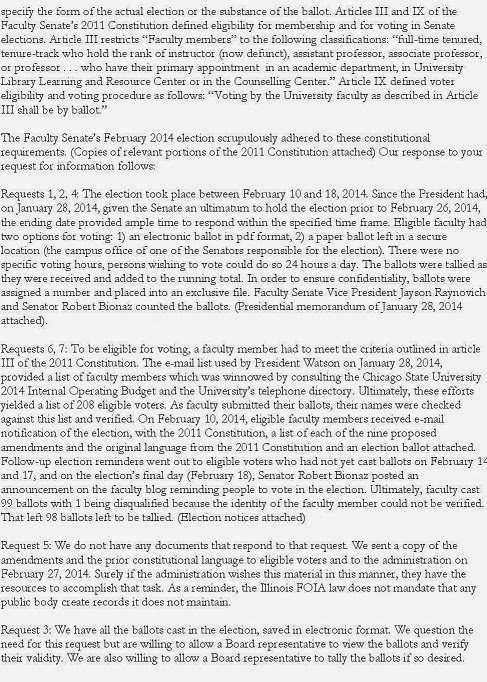 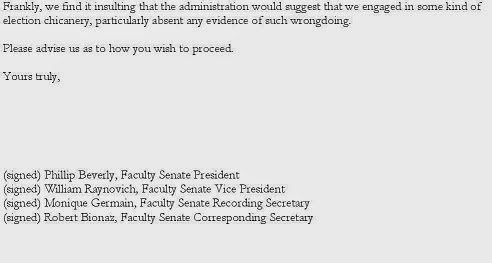 The Senate election was not a referendum on Watson's leadership but the results were overwhelmingly in favor of all nine proposed amendments. Not a single one of the amendments received more than three negative votes. The Senate Executive Committee believes that this controversy can be resolved and is willing to work toward that end. That is our only goal. We will gauge the good faith of both the administration and the Board by their response to our letter. I for one, am not particularly sanguine about the outcome.
Posted by Robert Bionaz at 5:01 PM