The Administration Takes a Giant Step Toward Total Control of Chicago State's Faculty: What Will We Do About It?

That does not prevent our administration from moving preemptively to establish a new faculty governance structure at Chicago State, one likely to be more amenable to Watson's failed administration. There are a number of problems with this survey, not the least of which is the Chicago State Board of Trustees own Governing Policy. This policy states that the structures of campus organizations "shall be determined by the constituencies they represent." Thus, any discussion of the structure of a faculty governance body must be faculty driven. In this case, the administration is asking the faculty to give their opinion on ten different items, submit that document to their respective Department Chairs who will submit it to the College Deans who will then tally the results and submit them to the administration "for their consideration." Is there any doubt about the outcome?

Look at the first bullet point. This is "part of an ongoing conversation"? Between who and who? The administration has certainly not spoken to the Faculty Senate, except to issue ultimatums. Have they talked with anyone else? Are these people even capable of telling the truth? Then take a look at the ten questions. Most revealing, I think are numbers 2, 6 and 8. Question 1 asks whether mediation is a viable option then question 2 makes clear that the Faculty Senate will be “suspended.” Question 6 asks faculty members to weigh in on whether non-unit A faculty should be included in the Senate and whether their right to vote should be subject to yet-to-be determined “prescribed limitations.” Finally, question 8 asks faculty to decide whether each college should have equally represented, which would result in colleges with 6 percent of the faculty possessing 20 percent of the Senate seats or a college with 53 percent of the faculty also possessing 20 percent of the Senate seats. What about the Library and Counseling? Will they also be part of the equal representation scheme? 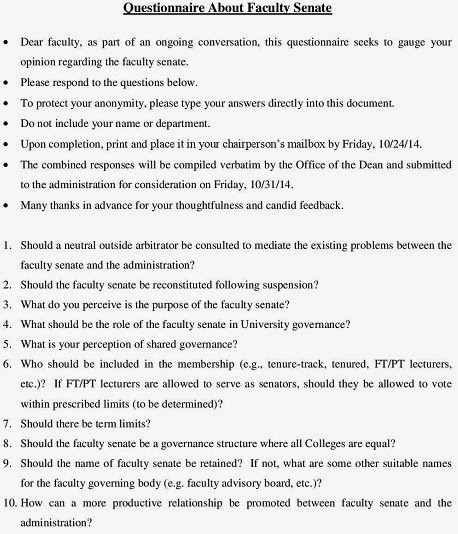 All of these possibilities raise the specter of administrative interference (again) in legitimate faculty functions. Obviously, a Senate configured with a large number of non-tenured faculty would be in a highly vulnerable position. Similarly, equal representation would allow the administration to potentially exercise a great deal of influence over that “representative” body. This reminds me of the “company unions” of the 1920s, where the company’s administrators selected the leaders and shaped the agenda of what they cynically refered to as unions.

Neither the administration nor the Board has ever responded to any of the numerous policy recommendations and resolutions passed by the Faculty Senate. Now, however, the administration is interested in the structure and activities of that body. This is nothing more than a naked attempt to take even more power (what little remains) from an apathetic and often supine faculty. While the “survey” raises a number of questions for me, I will save them for later. The most important question I have now is this: what should we as a faculty do about this? I await your response.