Where is Compliance and Communication on the Provost "search?" And does anyone (including HLC) care?

The HLC monitoring report is due on June 1st. The “university community” (sometimes known as the "CSU family") is supposed to be able to comment on the report to be submitted. I heard we were supposed to have 2 weeks to do that. So where is it? Something is posted on cougar connect (see the link below), but really, is this what the university has to say about communication and compliance? If HLC buys this then there is a bridge in I'd like to sell them. Can someone please enlighten us as to whether this is the report and where do we submit our comments on the document? Of course, since it is so close to the date of submission how will the university truly take the university community's comments into consideration? Will this be another trumped up phony document and at this point will it matter?

If you can log in to cougar connect the accreditation stuff shows up on that page. The document on communication and compliance is linked as an odp document. If you can't read that try converting it to a powerpoint document.


The HLC communication and compliance report hits very closely to the charade played out on campus this week and next. Does anyone really believe that Angela Henderson will not be granted the provost's position? She is Wayne Watson’s anointed successor for CSU president after all. She needs this provost gig to get to the big office. And of course, the Board of Trustees is in Watson's pocket, there is no independent oversight of the university ---something the HLC claims to be concerned about but in reality ignores. How can AH not get the job when WW already paved over the plagiarism issue in the minds of the Board of Trustees at their “emergency” meeting in February? They told him to fire her, he dissuaded them and then persuaded them to wait until UIC ruled lest Mr. H. (atty. for both AH and WW) sue them. How can AH not get the job when WW was on her dissertation committee? when she has been his loyal soldier for all that time at City Colleges and here? He is the giant on whose shoulders she stands—read the diss for this specific reference. How can AH not get the job when the job ad was tailor-made for her and is quite extraordinarily so unlike any other provost job ad you would find at any other institution calling itself a university? Finally, how can AH not get the job when the Hollins Group, the search firm that helped Leon Finney and Emil Jones ensure Wayne Watson's ascension to the CSU presidency, is involved in yet another one of these bogus searches?

And herein lies the question of compliance. In concocting the provost search the way H.R. Director Renee Mitchell and the administration did, is CSU in compliance with state law and the CSU Act itself?  The CSU Act, the law that established CSU as a legitimate body, says that the university may not pay a search firm for anything but a presidential search (see110 ILCS 660 Section 5-175). For any others--provost, vice president searches-- there must be board of trustees' approval.

Sec. 5-175. Search firm prohibition. Charges for the services of an external hiring search firm may not be paid from any source of funds, except (i) in the hiring of the President of the University or (ii) in the case of when the President of the University and the Board demonstrate a justifiable need for guidance from an individual or firm with specific expertise in the field of the hiring. The University shall implement a policy under this Section, including qualifying criteria, within 6 months after the effective date of this amendatory Act of the 97th General Assembly. (Source: P.A. 97-814, eff. 1-1-13.)

Past provost searches on campus have not used search firms. When Beverly Anderson was hired as provost under Elnora Daniel a colleague on that search committee told me, "we did everything ourselves, we did not have a search firm."

Three FOIA (freedom of information act) requests I made this spring for information about the Board's charge to establish the committee or their reasons for authorizing the use of a search firm for a university provost search has netted nothing. The university lawyers who handle the FOIA requests cannot provide documents because there are no documents. "The university does not have records responsive to your request." Where is the university's compliance with the Illinois statute?


We know that Dr Watson, the Human Resources Department, and the legal department unilaterally and without consultation of faculty changed the long-standing university hiring policies that had faculty and deans at the center of the job searches and decisions. Under their revised hiring policies the president is placed at the center of all hiring on campus. This remains unchanged even after HLC's pointed statements about faculty dissatisfaction over this change.

As to the composition of the current provost search committee compare the role H.R. took on for itself in being the sole arbiter as to participants with the "charge" and directions the Board of Trustees gave in 2008 when constituting the committee for the presidential search. Betsy Hill, chair of the Board, set the tone for a legitimate search. That the search was co-opted and maneuvered by board member Leon Finney and ended with the resignation of all but one member of the Search Advisory Committee is another story--see blog posts from 2009 to refresh your memory on that. 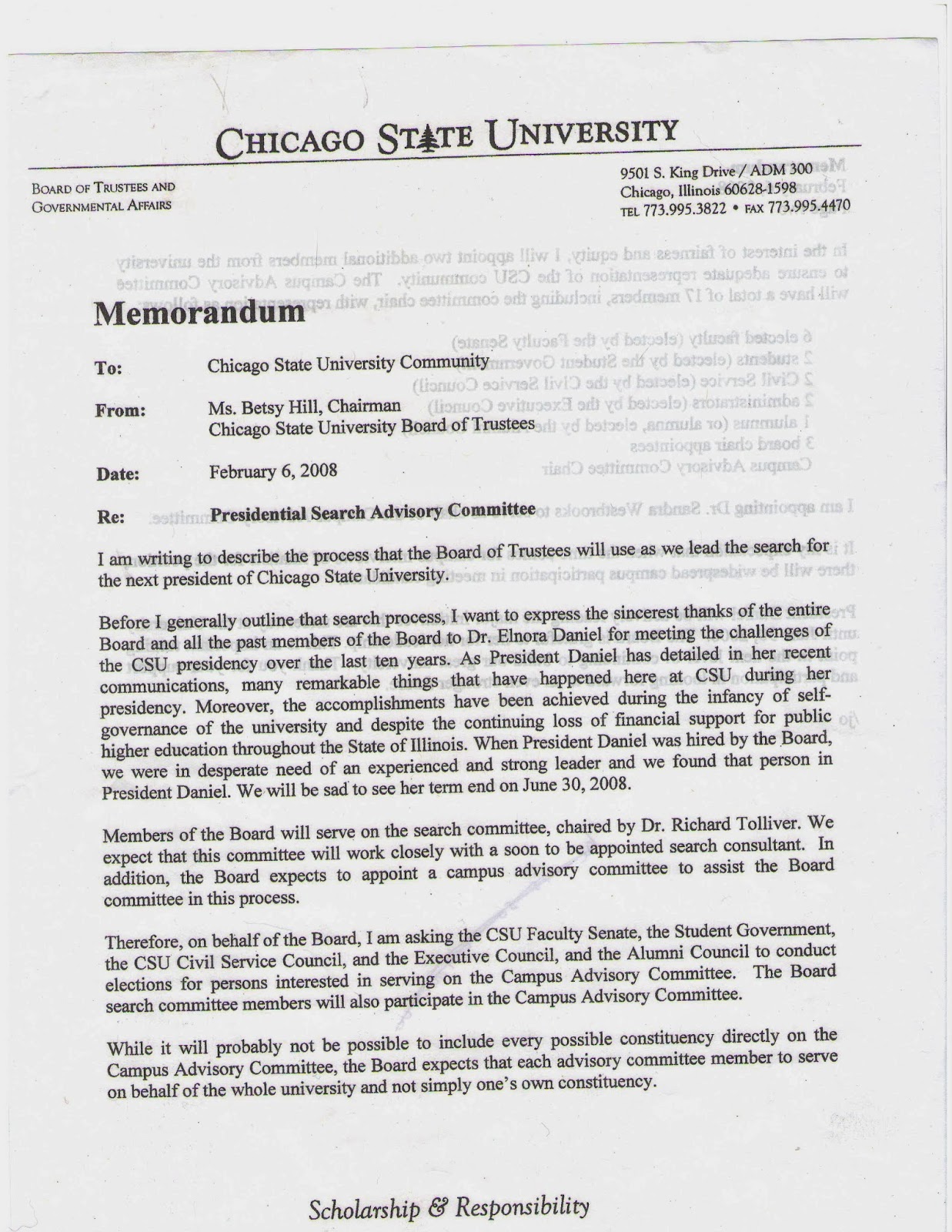 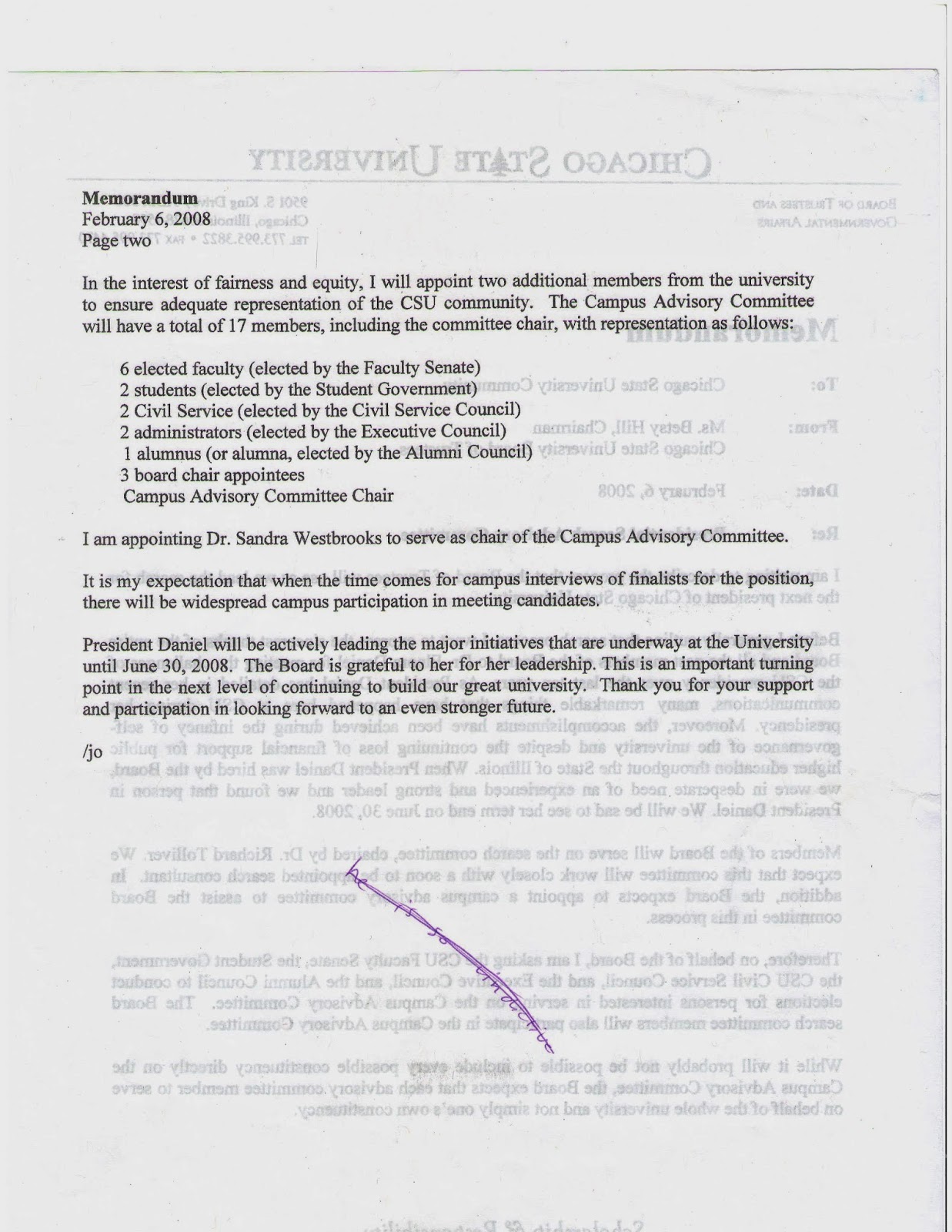 For the record, when the presidential search was conducted, several months in spring, summer, and early fall 2008 were spent taking bids for the search firm contract and interviewing search firms. The Hollins Group appeared late in the process and was pushed through by Leon Finney. At least the process of taking bids was done. Not so in the current provost search. FOIA requests asking for "the names and bids of competitors (including the Hollins Group) received for the CSU Provost Search 2013-2014" were met with the answer: "Please be advised that the University does not have records response to item #2 (contract bids) of your request" (FOIA Response, Feb. 18, 2014). Another FOIA request (May 4, 2014) for "Documents relative to the Board of Trustees' compliance with 110 ILCS 660 Sect.5-175 of Chicago State Law in hiring the Hollins Group to be the search firm for this position" was answered with a list of approved vendors that can be used by the University of Illinois System (FOIA Response May 12, 2014).

The Hollins Group was paid $75,000 in 2008-2009 to bring us a new president who turned out to be someone who was already chosen by Leon Finney and Emil Jones probably before Elnora's last boxes were packed up from the presidential mansion.

The Hollins Group is being paid between $ 70,000-100,000 to run a provost search this year which will most likely end up with the hiring of insider and presidential protege Angela Henderson. How much are we spending to bring other candidates to campus on top of this and on top of the hours Renee Mitchell's search committee put into this? No paperwork on the Board authorizing the use of the search firm, no contract bids from other firms for taking the search on.

Where is the compliance? Where is the independent oversight HLC and the State of ILL claim they demand of their institutions?

Lastly, where is the outrage?