As he has demonstrated over his sixteen-year career as head of City Colleges of Chicago then president of Chicago State, Wayne Watson is not exactly a talented administrator. However, he is good at rewarding former employees, friends and other connected persons with lucrative jobs at nice salaries. His successful efforts to expand the administrative ranks at Chicago State have been chronicled in earlier blog posts. In this post, we will explore the mechanics of hiring your cronies and paying for their salaries with taxpayer dollars. It is as simple as a corner shell game.

The basic structure looks like this: the administration creates a new administrative position, often with no apparent reason or need. This position is sometimes advertised, sometimes filled internally, but on most occasions, there is no money specifically appropriated for the salaries of the newly-minted (or recycled) employee. No problems there, just take the money from one of the many funds scattered around the university—funds that provide the opportunity to spend literally millions of dollars with no real accountability. The new position never appears in any form submitted to the state as the university makes no request to the legislature for its creation. While the funding for the position comes from other accounts, typically in the second year, the newly created position appears in the Chicago State budget as an appropriated position. I do not know if this is legal in the state of Illinois, but it is certainly poor accounting and budgeting practice and results in a budget submitted to the Board of Trustees that does not reflect the reality of how funds are expended at the university. Let me explain.

First a disclaimer: I am not an accountant and although I have some knowledge of public budgeting, it all came from my experiences in California. Nonetheless, I will endeavor to be as accurate as possible with the caveat that some of the conclusions I am drawing might be in error. I take full responsibility for those possible mistakes and would appreciate correction and clarification where I depart from established procedures here in Illinois.

In a properly constituted public budget, appropriations are approved by the funding body (local, county, state or federal governments). The appropriations are to be used for specific purposes. For employees, each person holding a position is identified by a number, (at Chicago State called a position number), the job is classified by a specific code (there may be only one such job or there may be hundreds), the budgetary sub-unit is identified and a specific dollar amount is assigned for the incumbent’s salary. Typically, public budgets have only a minimal amount of money available for discretionary spending. This precise budgeting dramatically reduces opportunities for political mischief with public funds.

The movement of monies in and out of accounts to fund these various moves demonstrates how the Watson administration prioritizes its spending. It always has money available for another administrator, particularly one who comes with the right pedigree. A few examples will illustrate this point. These examples neither suggest that the employees played any part in the financial shell game nor do they suggest that they have any particular personal connection with Wayne Watson. They simply illustrate the way Chicago State’s administration conducts its financial business.

Watson hired Maricela Aranda, a long-time City College employee, as an Associate Vice President of Administration and Finance on August 8, 2011. Although former Vice President of Administration and Finance Glen Meeks neither desired nor needed another Associate Vice President, Watson brought Aranda on board at a salary of $114,996. Of course, no line existed for such a position which meant that no funding existed either. In order to pay her salary, the university transferred $39,000 appropriated for administrative salaries from the Associate Vice President/Controller’s Office, another $34,614 from the same sub-account appropriated for Civil Service salaries and $41,382 appropriated for Civil Service Salaries from the Bursar’s sub-account. According to the Budget Change Form, these transfers were to be permanent, funding Aranda’s salary without the university justifying her position to either the board or the legislature. 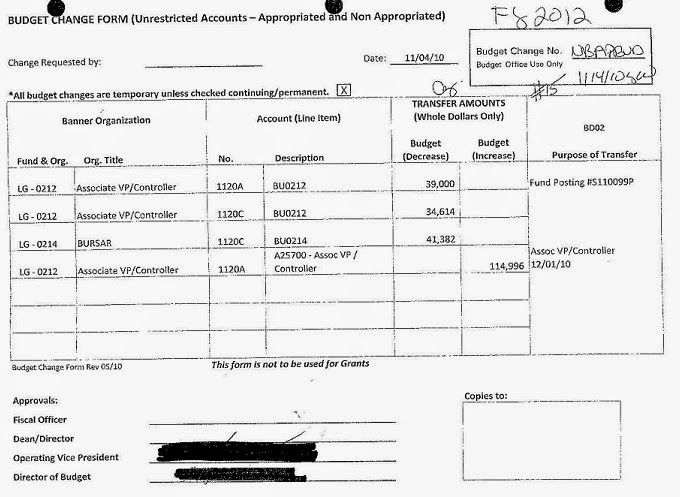 On March 13, 2012, the administration transferred $98,412 from a faculty to an administrative budget line to fund the salary of Bernie Rowan, the new Director of Assessment. Most interesting, the funds transferred came from what should have been a defunct sub-account, one for the old History, Philosophy and Political Science Department, eliminated in fiscal 2011. Nonetheless, even though the department no longer existed, appropriated money apparently still did. 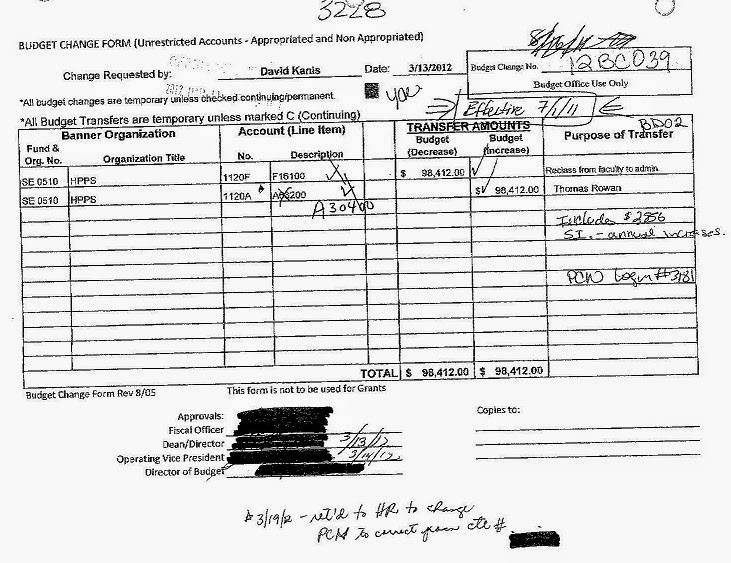 In August 2012, three new faculty members joined the Criminal Justice department. Although the original position announcement was for only one position, at a budgeted salary of $50,004, the three new faculty were hired at a total salary expenditure of $233,010. That meant that another $183,006 had to come from somewhere to fund these positions. In this case, the Dean of the College of Arts and Sciences coughed up the money as the university transferred the $183,006 from the Dean’s Pool to cover the salary expenditure shortage. 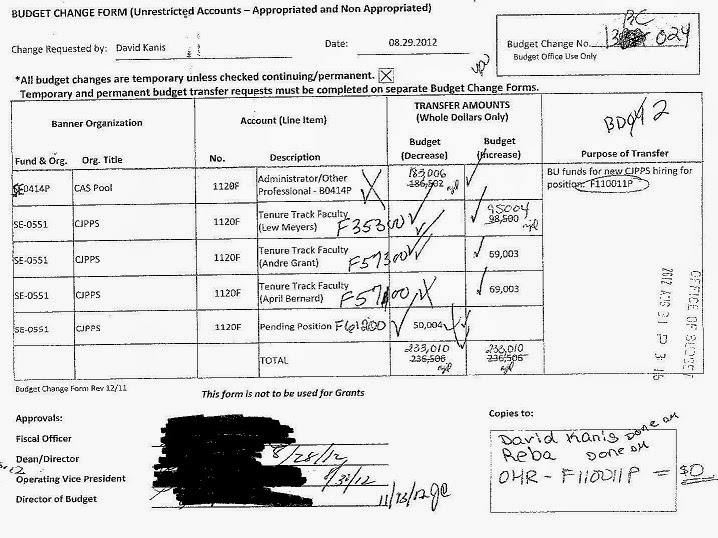 Perhaps the most egregious example of how the administration has manipulated funding to increase the administrative ranks is the case of Napoleon Moses, hired in 2012 as Watson’s “Chief of Staff.” The funding for Moses’ $154,992 salary came entirely from funds appropriated for permanent improvements. In other words, money originally earmarked for “construct[ing] buildings, purchas[ing] land or for major rehabilitation of existing facilities” (taken from: http://www.niu.edu/accounting/aboutus/funds.shtml.) went to pay a generous administrative salary. Given the condition of Chicago State’s infrastructure, it is easy to understand how Wayne Watson would find the addition of another person to the turgid administrative ranks more important than using these funds for their intended purpose. 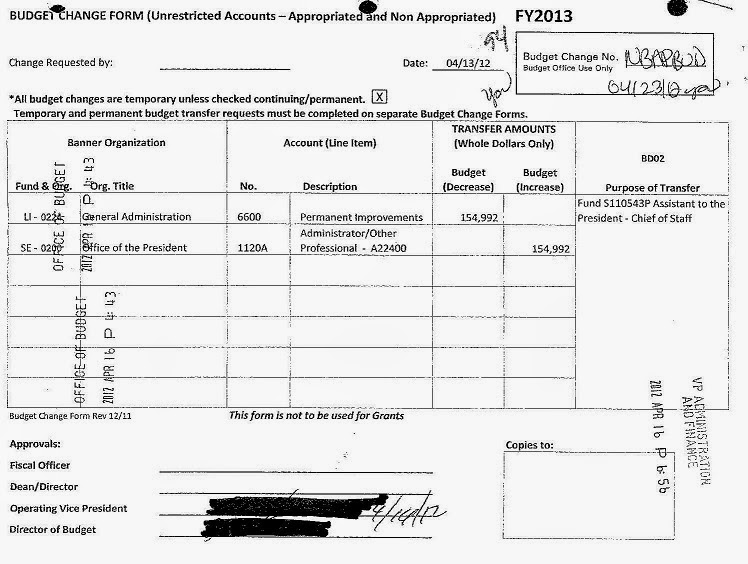 Here at Chicago State, we already know that “we hire our friends” is more than a motto, it is our creed, a proven way of doing business. Now, thanks to the miracle of FOIA, we are able to track the way the university moves money around to achieve its goal of turning the school into a place where any incompetent but well-connected boob can land a cushy administrative position. This is what our administration practices and stands for.