Here's a Look at What Our Lavishly Paid Administrators Spend Their Time Doing: Bullying Students, Rigging Elections, Running the Place Like an Amateurish Crime Family

“How a person treats people who have less power than they do is a fundamental test of a person’s real character.”


Willie Preston and Brittany Bailey are strong young people. However, in a contest with the entire weight of the Chicago State University power structure, abetted by the police power of the State of Illinois, they are short of both resources and influence. Their recent lawsuit demonstrates this power inequity graphically as it details the egregious behavior of Chicago State administrators toward them. Through their pleading in the U.S. District Court, we are able to construct a portrait of how a number of the university’s administrators treat persons who disagree with their behavior and who have no ability resist a variety of administrative abuses. The picture is ugly. There is only one permissible multi-part narrative for Chicago State: Wayne Watson as champion of the African American students, opposed by “disgruntled white faculty”; Wayne Watson as the infallible great leader; frankly, Wayne Watson as the heroic educational “reformer”. Any deviation from that party line by anyone risks severe consequences. Neither Willie Preston nor Brittany Bailey subscribe to that narrative and the administration has responded accordingly.

According to the pleading, the administration’s abuses begin with a conversation between Angela Henderson and Preston in Fall 2011. After the “Occupy Cook” event in November of that year, Henderson asked Preston to meet with her. Demonstrating that she viewed Chicago State’s students as a bunch of weak-minded fools, Henderson advised Preston (who she apparently believed had just fallen off the turnip truck in front of the school) that “faculty members were using students to attempt to hurt the President who she said was fighting every day to ensure African American students had just as many opportunities as white students across the state.” Henderson warned Preston that “he should not let a ‘bunch of white, Communist, atheist professors’ trick him.”

In Fall 2012, Preston and Bailey got involved in student government and ran afoul of Matoya Marsh, the Director of Student Activities. Marsh’s constant interference with the operation of the student government went far beyond her role as an “advisor” and positioned her squarely against a number of proposals Preston and Bailey made to improve campus life for Chicago State’s students. They proposed the re-creation of a student newspaper, implementing scholarships and grants for students and the establishment of a system that would reward students for attending poorly populated student government meetings. Preston and Bailey circulated petitions among students to gauge interest in their proposals. In response, Marsh “publicly criticized Mr. Preston during Executive SGA meetings for distributing these petitions.” The proposals generated forceful opposition from Marsh “who did not contend that the proposals violated university regulations, but barred their implementation because she disagreed with them.”

The proposed student newspaper became especially contentious. Marsh said that the “student body could only publish a newsletter under her close direction and approval. When Mr. Preston asked whether they (students) would be able to include in such a publication proposals about changing the administration, Ms. Marsh responded she would definitely not approve that type of speech. Ms. Marsh did not cite to any policy that such speech would violate.” 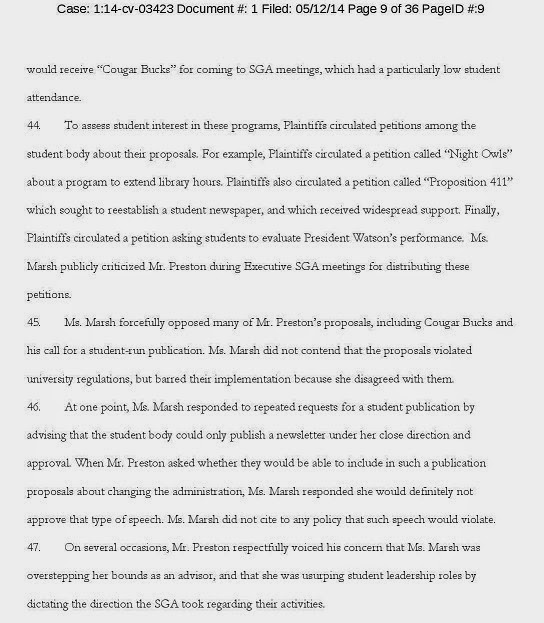 Apparently feeling the need to apply additional pressure to Preston, at the beginning of 2013, the university began to use the force of its judicial apparatus to involve Preston in a string of judicial affairs complaints that were supported by only flimsy or often simply mendacious claims and/or evidence. Preston met with Watson in February or March 2013. During that meeting, Watson told him that they “should work together because they are from the ‘same hood’ and that he (Preston) ‘should not be hanging around them white communist professors who got theirs and don’t give a damn about you getting yours.’ Mr. Preston told Dr. Watson that he listened to the students at CSU and was acting according to their concerns.”

Shortly after this meeting, Preston announced his candidacy for the position of Student Trustee on the Chicago State Board of Trustees while Bailey opened a campaign for the presidency of the Student Government Association. Their platform included the “reform of CSU policies” and the “enact[ment of] procedures to guard against corruption. Central to Mr. Preston’s campaign was his pledge to propose a motion that the Board of Trustees remove Dr. Watson as president.” These candidacies spurred an immediate reaction from Marsh who first baselessly told Preston that he “was not eligible to run because he had been disciplined,” then urged students to vote for candidates who “were not political opponents of President Watson.” In addition, Marsh allegedly “told other CSU employees to campaign against Mr. Preston.” Finally, Marsh approved campaign material for the pro-Watson candidates but not for Preston and Bailey. 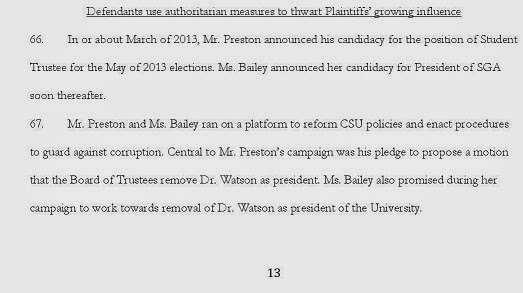 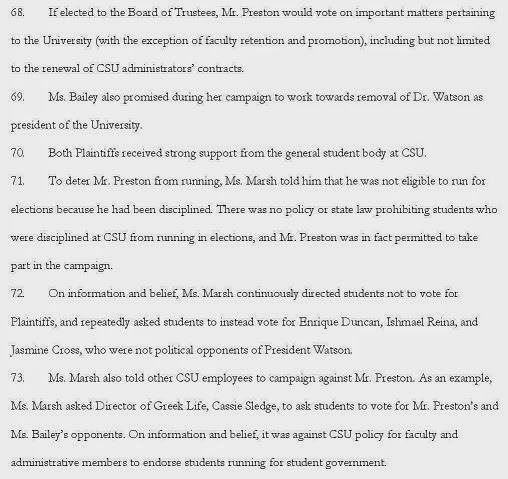 At one point during the election, one of the candidates opposing Bailey told Preston that “Watson had assured him that he would not lose the election (‘we take care of our own’),” and that “even if he received a lower number of votes during the election, he would still win.” However, both Preston and Bailey won their races, necessitating the administration’s intervention into the process. Waiting until their favored candidates had lost, the Chicago State Student Board of Elections invalidated the results, allegedly because Marsh had “inappropriately interfered.”

Ultimately, the rigged election resulted in the elevation of pro-Watson candidates to the Board of Trustees and the SGA. Also, the university ultimately expelled Willie Preston and subjected him to criminal prosecution for alleged offenses against Angela Henderson, offenses that at least one member of the university community described as “a plan they concocted to get him off campus.” The university official wondered “Why do they keep messing with this guy, trying to ruin his life when he’s not even breaking the law? Angela Henderson is not scared of Willie.” Although Preston’s arrests were clearly politically motivated, the university police had to “comply with orders if they wanted to keep their jobs.”

This is what we have at this university. Someone who disagrees with the administration of Wayne Watson, someone who attempts to exercise the right of free expression, is warned, threatened, harassed with judicial affairs complaints and subjected to arrest and prosecution. I suppose this is what the university means when it talks about “progressive discipline.”

Although the statements and behaviors described in the Preston/Bailey complaint are currently allegations, let us take a look at the records of the two opposing camps. On one side, we have the university administration, led by Wayne Watson, a “leader” who on at least two occasions has been found culpable for retaliatory firings, whose “academic” and “teaching” careers are dubious at best, a man who has severely damaged the reputation of one college system and one university, a man who would not have the job he currently holds if he were not a local political hack, and a man who needs desperately to secure what political influence he still wields to hold onto his job.

He is aided by an interim provost whose original application contained demonstrably false statements and whose massively plagiarized dissertation disgraces her. This so-called “Doctor” blights two academic institutions and notwithstanding all the legal nonsense should have been discharged months ago. No need to describe again the various misadventures of our intrepid Chief Counsel who, almost on a regular basis, exposes the university to national ridicule. Another opportunity for bad press will undoubtedly come soon.

The image created by the Preston/Bailey complaint--of a university president and his administrators bullying students, rigging elections and running this “university” as if it were a corrupt political ward or even worse, some kind of fifth-rate dictatorship, would be comical if it were not so true. Is it imaginable that this kind of behavior would be acceptable in any other educational institution? If the faculty at this institution are willing to let this kind of behavior go unchallenged, if they are willing to rationalize the choking of a student at a public meeting for wearing a baseball hat, if they are willing to stand mute or quibble over rhetorical styles while this administration wreaks havoc on this school, then we do not deserve to exist as a university.

Posted by Robert Bionaz at 7:19 AM