Of Scams and Frauds: The Watson Administration at Chicago State

Instead, this is what exists here: the president does severe damage to the school’s image and to the relationship between faculty and the administration. He involves himself in activities like interviewing candidates for various positions (including adjunct faculty), he hires cronies and pays them lavish salaries for poor performance, he has his legal “team” attack free expression and bring in the power of the state to physically crush the dissent of the powerless, he condones lying and cheating on the part of his senior administrators. His apparent inability to discharge the duties of his office along with a propensity for vindictiveness and retribution have exposed the university to constant negative publicity, to financial loss and have created a toxic campus atmosphere. Simply put, Watson is a divisive figure, playing staff, students and faculty against one another and attempting to co-opt certain segments of the faculty in support of his dystopian “vision” for Chicago State.

If this were a university dedicated to academic excellence and integrity, we would not have to suffer the indignity of employing at least three senior administrators who have misrepresented themselves in their application materials. If we had a president dedicated to academic excellence and integrity, these persons would never have been hired. In the event that one or more slipped through the screening process, as demonstrable evidence of their mendacity surfaced, terminations would have ensued. Of course, we have seen nothing of the sort. For two of these persons, the result has been a reward for lying and even cheating to obtain a terminal degree. That state of affairs demonstrates the true feeling of this administration regarding academic integrity: it is simply to be treated as a scam, applicable perhaps to the “little people” but not relevant to anyone highly placed in the administration.

As revealed on this blog over the past several months, the university has participated in the construction of an alternative (and false) reality for a number of its administrative employees. For example, Angela Henderson appeared as Angela Henderson, Ph.D., several months before she received her degree from the University of Illinois Chicago. Currently, Henderson’s brief biographical sketch notes that “Prior to joining CSU, Dr. Henderson served as Provost, Dean, Department Chair and tenured professor at various institutions of higher education.” Napoleon Moses, who apparently left the university May 15, 2013, continued to appear on the web site as the Chief of Staff until about one month ago. Renee Mitchell, who holds a D.M. degree from the University of Phoenix continues to be presented on the web site as Renee Mitchell, Ph.D.

This false information on the university web site is contradicted by public records, most available from Chicago State. As reported on this blog several months ago, as early as November 27, 2012, Henderson appeared on the web site as a Ph.D. Of course, she did not receive the degree until August 11, 2013. The information on the Chicago State web site about her work history is simply false. According to her own resume, Henderson’s only prior college academic experience includes four years as an Assistant Professor (1994-98) and two years as Department Chair of Nursing (1998-2000) at Olive Harvey College. Her administrative experience includes two years (a misrepresentation in her resume of her experience) as Dean of Instruction (2000-02) at Olive Harvey, then several administrative positions from 2002 through mid-2011 at the City Colleges of Chicago District Offices. Hardly experience at “various institutions of higher education.” 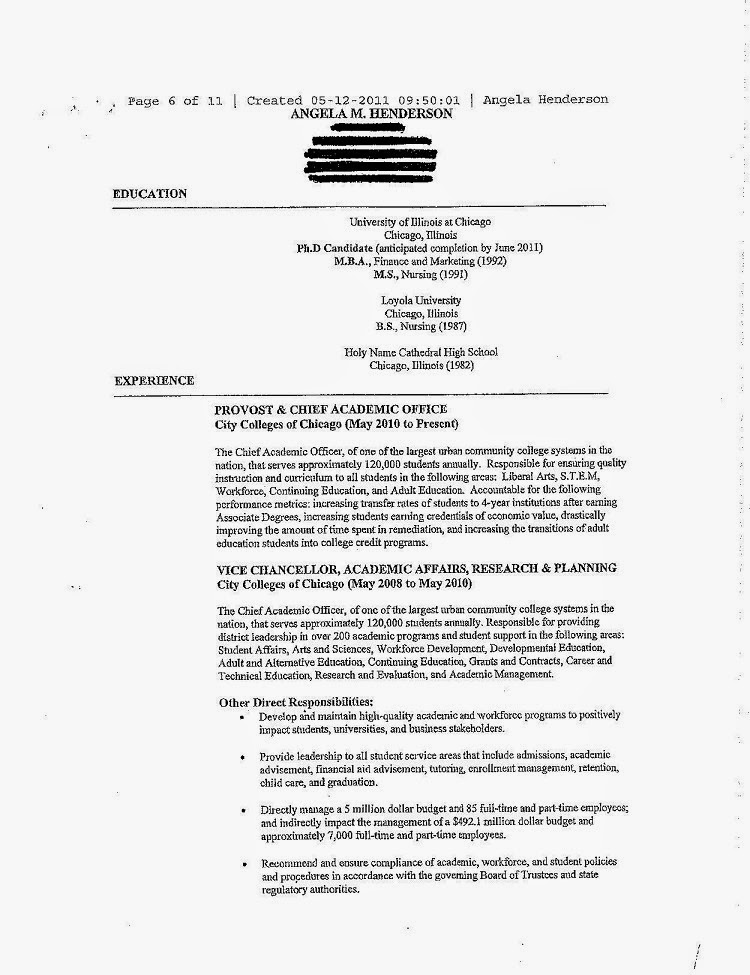 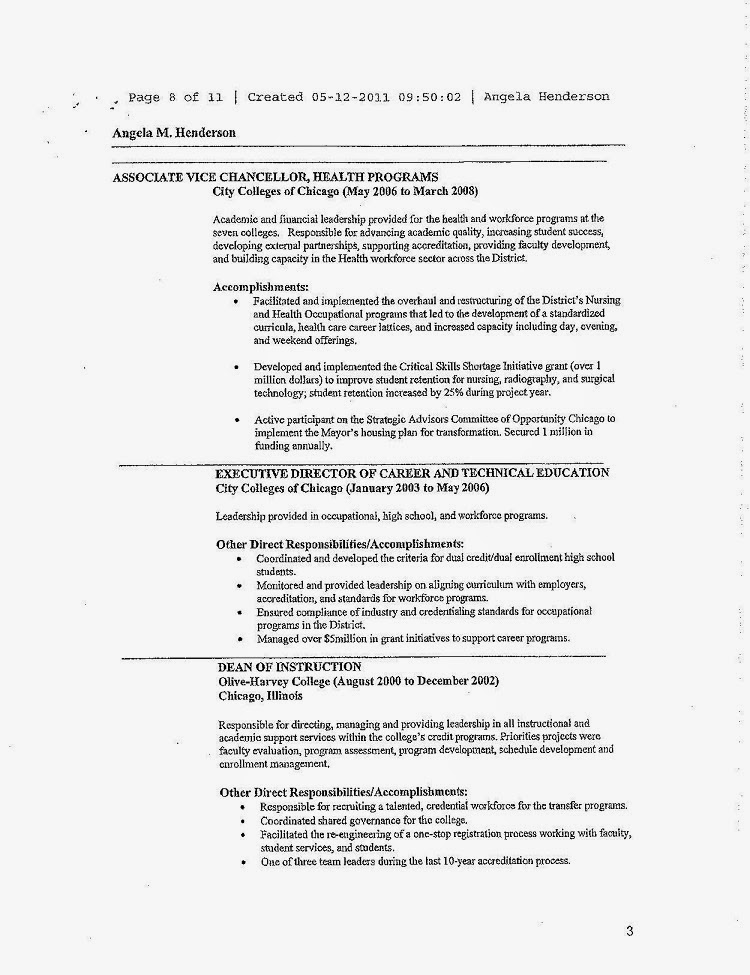 As previously reported on this blog, Henderson also provided false information on her application and resume about her pending Ph.D., claiming she expected to receive the degree in June 2011, or 8 months prior to receiving IRB approval to begin her research. Of course, her dissertation became an issue at the end of last year as it proved to be extensively plagiarized. Although we continue to await the decision of the University of Illinois at Chicago regarding any consequences of Henderson’s cheating, the plagiarism in her dissertation is both extensive and demonstrable.

In addition, the administration has apparently concocted a cynical defense of Cheri Sidney’s falsified 2009 resume. It is all the fault of Human Resources. Some nameless, faceless person in that unit incorrectly entered a non-existent degree for Sidney on her hiring form. When Human Resources discovered the error, they told Sidney not to worry about it that it would be fixed, then neglected to correct the mistake. Again, this ridiculous version is demolished by the official record. The lies about Sidney’s educational credentials appear on her resume, a document prepared by her, not by Human Resources. As previously reported on this forum, in 2009 Sidney claimed a M.A. in “HR Management.” She did not receive a Master’s Degree until June 2013 and it was from the DePaul School for New Learning, in “Applied Professional Studies.” While in most organizations, this kind of dishonesty would result in a person’s firing, at Wayne Watson’s Chicago State, it is a reason for promotions and raises. At how many other universities is a totally unqualified employee who happens to be the president’s girlfriend the occupant of a senior administrative position at a six-figure salary? 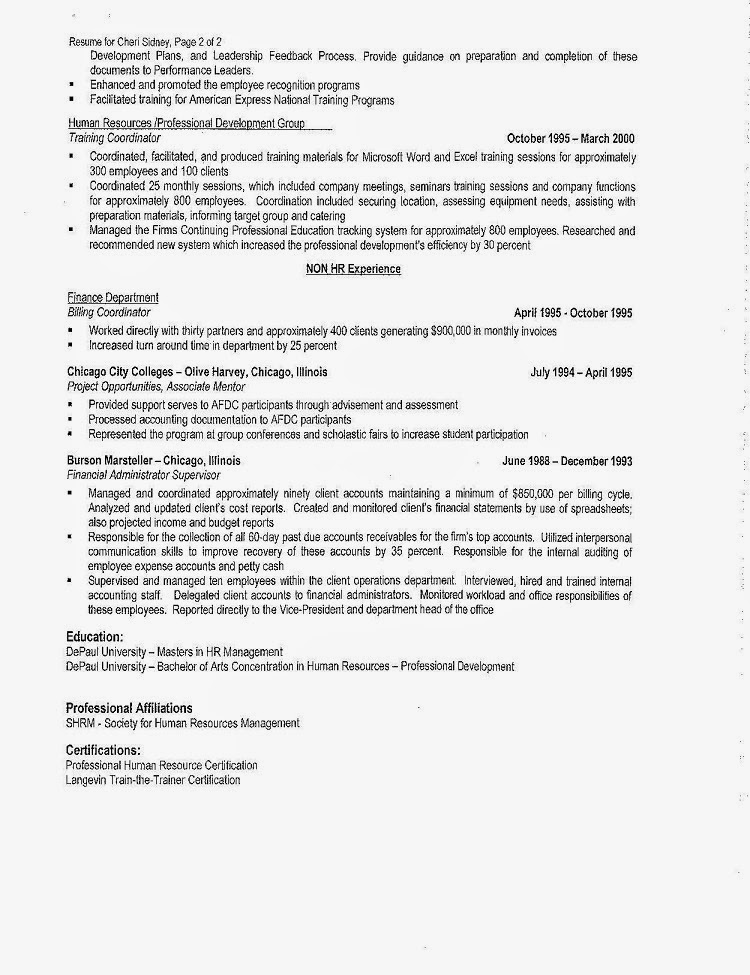 Of course, the ultimate insult to the Chicago State University community would be the elevation of Angela Henderson the position of Provost. Given Wayne Watson’s proven disregard of academic ethics, it seems like this is the most likely scenario.