This is What Being a Bully Looks Like. Willie Preston's Press Release

Friday, the unprovoked attack on a CSU student demonstrated the depths to which this administration and its flunkies have sunk. Since the beginning of Wayne Watson's tenure as Chicago State president, his administration has made a concerted effort to stifle any opposition, both from the faculty and from the students. There is no need to rehash the various and sometimes sophomoric attempts made by Watson and his minions but I think his pattern of bullying and oppression marks him as a true intellectual coward. Let me explain.

Chicago State University is ostensibly an institution of higher learning, dedicated to the search for intellectual honesty and, if possible, the revelation of truth. In such an environment, there is bound to be discord and disagreement. Indeed, some disagreements can become quite heated as individuals on different sides of an issue passionately extoll the virtues of their positions. Over the past several years, members of the Chicago State faculty have made what I believe is a solid case for Watson's mismanagement and questionable ethical practices. We have provided evidence to support our charges. In an intellectual environment, a viable administration would attempt to refute those charges with evidence of its own and the resulting exchange might even benefit the university, its students, staff, faculty and administrators.

Instead, what have we gotten? Glib sloganeering and empty rhetoric. Bullshit claims of raising "standards," increasing "accountability" and "responsibility." This seemed the tactic of choice until late 2012 when the president and his supporters began circulating anonymous and vicious attacks against sitting members of the Chicago State Board of Trustees Z. Scott and Gary Rozier, then University Provost Sandra Westbrooks, and of course, Faculty Senate President Phillip Beverly. In late February and March 2013, when some members of the board attempted to remove Watson as president, he hid behind a cadre of attorneys, ministers and political figures, apparently unable to articulate on his own a defense of his administration. Instead, we had to listen to his legal mouthpiece compare Watson's travails to those of Jesus or Martin Luther King. Perhaps the most telling evidence of Watson's intellectual vacuity came from his appearance on public television, where he appeared with his mouthpiece who managed to prevent his client from getting himself into trouble.

Ultimately, Watson succeeded in keeping his job. In short order, he fired Glenn Meeks and his administration intruded into the student election in the Spring of 2013. Ultimately, the Watson administration managed to get its chosen candidates into office by having his stooges invalidate the legitimate election results. What administration in any other U.S. university would take such an interest in what is essentially a function of student-run government? Likely none, however, Watson's desire to control all aspects of the university operation, particularly the "message" made it imperative that any potential dissenters be kept out of student government. Deploying the tools at his administration's disposal, Watson moved decisively against students who hold no power and possess few resources. If this is not bullying, what is?

Since Fall 2013, things have gotten far nastier. Willie Preston has been expelled from school and subjected to two arrests. The Watson administration has attacked the Faculty Senate through ridiculous trademark infringement claims. Currently, there is a "cyber-bullying" policy making its way through the board. Undoubtedly it will be approved. We'll see how that goes for the board and the university. If there is any doubt about the ethical bankruptcy of the Chicago State Board of Trustees, here's Chairman Anthony Young on Friday talking about Jokari Miller's arrest: "And before we go to our first matter, I'd like to state to everyone there was an unfortunate incident at the end of our morning session. All of the Trustees regret that incident and we'd like to avoid further incidents if at all possible. This is our board meeting, we don't think it's unreasonable to request for people not to wear hats, considering we're inside. If we ever had a board meeting outside, of course anyone could wear their hat, but we intend to publish a dress code for our meetings in time for the next meeting." Based on this comment, I must assume that Young thinks that choking and arresting someone is an entirely appropriate response to wearing a hat in violation of a non-existent dress code. What will the board do? Make the wearing of certain kinds of apparel a capital crime?

So this is the way Wayne Watson and his lackeys respond to dissent. They use the power of the university to stifle free expression. They engage student stooges to inveigh against the alleged abuse of free speech by Watson's opponents. They use the power of the state to attack and arrest critics. They use their political influence to insulate themselves against the potential adverse consequences of their actions--to good result so far. After all, this is just a university filled with African American students, who really cares about them? Certainly not the administration, the board, or to this point, anyone else in Illinois with the ability to stop this travesty. Cyber-bullying indeed, here at Chicago State, the oppressors position themselves as the oppressed.

This is a press release sent out by attorneys for Willie Preston and Brittany Bailey. We'll see if anyone in the media picks this up. 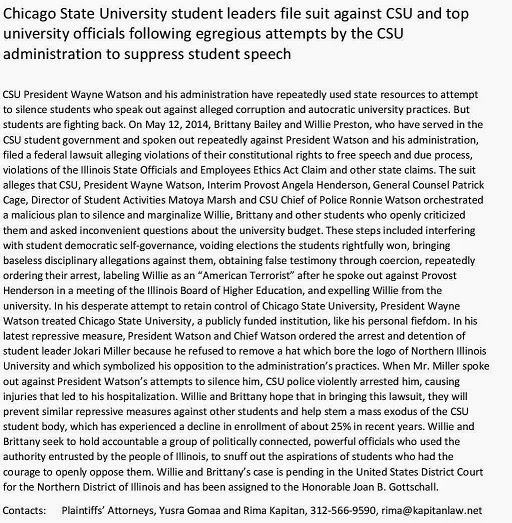 Posted by Robert Bionaz at 4:56 PM