To Hell With Federal, State and Case Law: Wayne Watson Will Decide Who Gets a Job On The Basis of How Our Potential Colleagues Look.

When persons occupy responsible positions in public service, it seems reasonable to expect from them a rudimentary knowledge of the laws and rules governing the operation of their institutions. This is knowledge that Wayne Watson seems not to possess as yesterday, in front of members of the Illinois General Assembly Higher Education Appropriations Committee, he went on the record as favoring, and practicing, discriminatory hiring policies.

Through the miracle of electronics, these hearings are streamed live to your home computer. Although what follows comes from notes of what Watson said at the hearing, I believe the account is substantively accurate. If anyone wishes to correct the text, please advise as to what I have gotten wrong. Also, since I am not an attorney, my interpretations may be somewhat off-base. If I am drawing inappropriate conclusions from the following material, I again welcome any corrections that might help clarify these matters. So much for the disclaimers.

Yesterday, Watson took the clown show on the road to Springfield as he made an appearance before the Higher Education Appropriations Committee. After some boilerplate stuff about Chicago State’s successes and challenges, one of the committee members, Mr. Welch, I believe, inquired about the faculty. Watson responded that the faculty at Chicago State included 6 percent Latinos, 28 percent African Americans, 20 percent Africans, 36 percent whites and 10 percent Asians. Watson then told the committee that he was “not going to fill positions without a diverse pool. I am trying to fill positions in academic departments that had only men and no people of color in tenure-track positions.” Watson expressed a belief in “unions” but warned that “I’ll take a department down to twenty-percent full-time faculty if they don’t bring diversity,” of course all this would be done “within the context of the contract.”

The members of the committee let Watson’s somewhat remarkable monologue pass without comment. Mr. Welch then told Watson that “the media doesn’t portray you well and part of that has to do with your own branding.” Welch noted that Chicago State apparently had “a lot of interims” in administrative positions and asked Watson, “are they qualified?” Watson responded by saying that because of FERPA and because the question dealt with “personnel” that he could not give specifics. Since Chicago State’s Chief Plagiarizing Officer Angela Henderson accompanied Watson to Springfield, it seems understandable that he might want to avoid a discussion about the qualifications of some administrators. His comments on hiring, however, reflect an ignorance so profound that it is off the abject stupidity chart.

Non-discrimination in hiring has been the law in the United States since the Civil Rights Act of 1964. Section 2000e-2 of Title VII of that act reads: “It shall be an unlawful employment practice for an employer -

(1) to fail or refuse to hire or to discharge any individual, or otherwise to discriminate against any individual with respect to his compensation, terms, conditions, or privileges of employment, because of such individual’s race, color, religion, sex, or national origin; or

(2) to limit, segregate, or classify his employees or applicants for employment in any way which would deprive or tend to deprive any individual of employment opportunities or otherwise adversely affect his status as an employee, because of such individual’s race, color, religion, sex, or national origin.”

The State of Illinois also has statutes in place that basically mirror the language in the Civil Rights Act by classifying as a Civil Rights violation an employer’s refusal “to hire, to segregate, or to act with respect to recruitment, hiring, promotion, renewal of employment, selection for training or apprenticeship, discharge, discipline, tenure or terms, privileges or conditions of employment on the basis of unlawful discrimination . . .” (Illinois Human Rights Act: http://www.ilga.gov/legislation/ilcs/ilcs5.asp?ActID=2266&ChapterID=64).

Case law, as controversial as it often becomes, has shaped the response to discrimination. In its hotly-debated 1978 decision in Regents of the University of California v. Bakke, the United States Supreme Court upheld the practice of affirmative action while declaring admissions “quotas” based on race to be unconstitutional as a violation of the Equal Protection Clause of the 14th Amendment.

Two 2003 cases decided by a very different Supreme Court, Grutter v. Bollinger and Gratz v. Bollinger, permitted a “tailored use of race” to achieve diversity while affirming the Bakke decision’s prohibition against “quota” systems designed to correct racial inequities. To the best of my knowledge, that is where the existing case law stands today on affirmative action practices.

The State of Illinois Human Rights Act charges all state agencies with “Establish[ing], maintain[ing], and carry[ing] out a continuing affirmative action plan consistent with this Act and the regulations of the Department designed to promote equal opportunity for all State residents in every aspect of agency personnel policy and practice.” The plan must include a “detailed status report . . . specifying the goals and methods for increasing the percentage by race, national origin, sex and disability, and any other category that the Department may require by rule, in State positions” (Illinois Human Rights Act: http://www.ilga.gov/legislation/ilcs/ilcs5.asp?ActID=2266&ChapterID=64).

Perhaps not surprisingly, Chicago State’s Affirmative Action plan, drafted in 2000, is somewhat vague. Boilerplate language like the university’s commitment to “diversification of all its internal divisions by race and gender,” combines with such platitudes as “The University seeks to ensure that no person will encounter discrimination in employment . . . on the basis of age, color, disability, sex, national origin, race, religion, national origin, or veteran’s status” to create a policy that hardly specifies “the goals and methods for increasing” the percentages of under-represented persons. 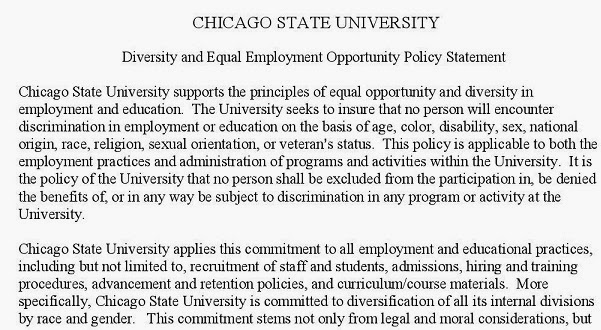 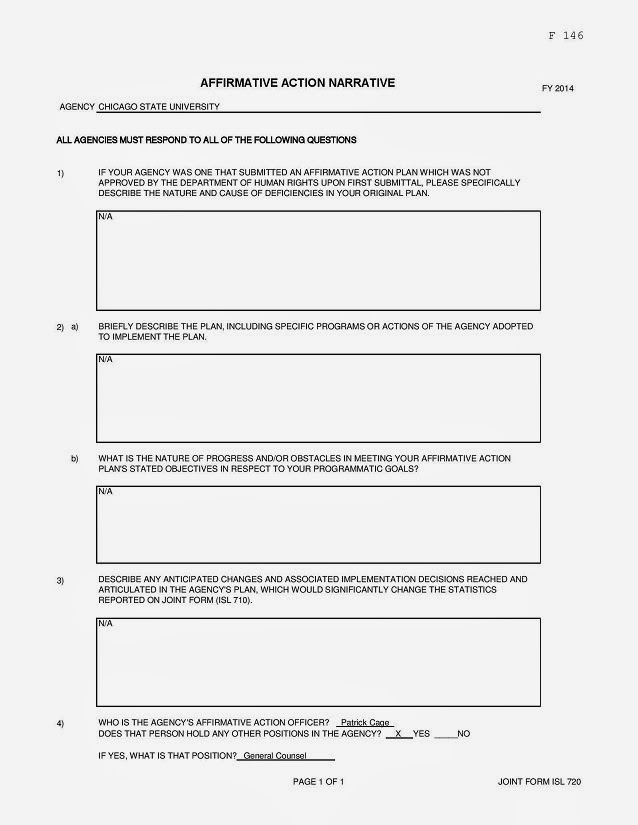 The Watson administration has done nothing to modify that plan and in its yearly reports to the Illinois State Legislature, consistently indicates that questions about Chicago State’s Affirmative Action Plan are “not applicable.” Of course, given the statistics cited by Watson to the Appropriations Committee, an Affirmative Action Plan for Chicago State may not be necessary. The Affirmative Action figures reported by the university to the Illinois State Legislature hew closely to those quoted by Watson. For the Fiscal Year 2014 report, Chicago State’s faculty included 33.9 percent White, 48.6 percent African American, 3.8 percent Hispanic, and 13.8 percent “Other” (these are the categories reported by the university). Overall, the ethnic composition of the total staff at Chicago State University is as follows: 17.4 percent White, 70 percent Black, 5.9 percent Hispanic and 6.7 percent “Other” (again, these are the categories reported by the university). In addition, the faculty at Chicago State is 55.5 percent female while the total staff at the university is 58.6 percent female. In my estimation, these figures reflect a diverse faculty and a strong African American representation in total employees. Why does Watson think he needs to strive to increase “diversity” even to the point of threatening departments that do not meet his purported standards? 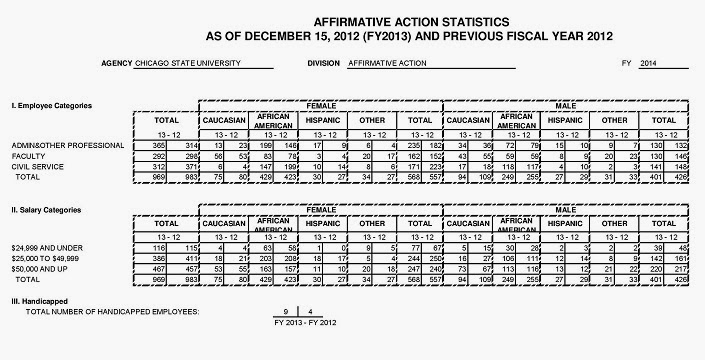 As usual, he provides no rationale for his behavior. His belief that the Chicago State faculty is not “diverse” may be based on anecdotal evidence from one of his “listening tour” visits to specific departments. He has certainly articulated this view for some time. For example, he said to me on October 31, 2012, that he had noted one department that contained nothing but men and how problematic he thought that was. I am sure that a number of mid-level administrators could attest to Watson’s belief that he needs to save Chicago State from itself by employing some kind of secret calculus to ensure that a “diverse pool” of candidates is available for every position. If not, by his own admission, he simply will not hire anyone.

We have seen ample evidence of Watson’s respect for policies and procedures, at the university and in the law. For examples, refer to his intrusion into the DAC process and the Criminal Justice search faculty search committee that contained only administrators in 2012, his continuing flaunting of the Human Resources policy prohibiting personal relationships with subordinate university employees, his refusal to follow Human Resources policy in the disposition of personnel matters involving falsification of university records, and his recent costly misadventures with employment and whistle-blower laws. Now, he’s announced to the world that he that he will continue to apply his unerring judgement to employment matters at Chicago State–albeit, in his typical arbitrary and capricious manner.

What will we do in terms of our employment applicants? Will Watson have a survey done in departments that want to hire faculty to determine just what kind of race or ethnicity for a particular candidate is appropriate? Will statements like “no Irish need apply” begin appearing on Chicago State job announcements? In departments with acceptable levels of “diversity” will those application strictures be extended to “no Latinos need apply?” or “no Asians need apply?” or even “no African Americans need apply?” After all, Watson should function as an equal opportunity discriminater, no?

Given the fact that Watson recently suffered a disastrous defeat in an employment discrimination case, one might think he would learn something from that experience. Apparently not, as he continues to behave in a way that exposes the university to potential, and completely unnecessary, legal consequences. How long must we suffer this fool?

Posted by Robert Bionaz at 7:15 AM