How Patrick Cage and the CSU Legal Team Make Their Cases or Why Does the University So Frequently Lose?

Chicago State’s crack legal department led by the intrepid Patrick Cage, consistently cranks out legal arguments that boggle the mind with their Orwellian implications. Currently on campus are two controversies swirling around the Faculty Senate and Student Government Association (SGA). Both of these organizations seem to be “advisory bodies” as defined by the Illinois Attorney General. Nonetheless, the university is treating these two entities in decidedly different ways: differences that are contradictory and even ridiculous.

At the outset of this post, I must confess to not being a lawyer. Given the inconsistencies in the legal arguments that come out of the Cook building, I can only be grateful for that fact. Nevertheless, I will attempt to provide a layman’s interpretation of the following gibberish from our legal “team” and what it seems to mean. The challenge for the reader is to follow the bouncing ball here (sorry for the outdated cultural reference to Mitch Miller).

Let us begin by defining our terms. Both the Illinois Freedom of Information Act (FOIA) and the Illinois Open Meetings Act (OMA) define “public bodies” as: “all legislative, administrative, executive, or advisory bodies of the State . . . and any subsidiary bodies of the foregoing.” The Illinois FOIA legislation also specifically includes “state universities and colleges” as “public bodies” subject to FOIA legislation. In a January 8, 2013, informational letter, the Attorney General’s Office reiterated that for purposes of OMA, “public bodies include . . . all [state] legislative, executive, administrative or advisory bodies . . . [and] all committees, subcommittees, and subsidiary bodies of public bodies.”

The Attorney General notes that “FOIA applies when a member of the public is seeking access to public records. OMA is intended to ensure that the actions of public bodies are conducted in the open . . .” Therefore, it seems that the Illinois Attorney General makes no distinction between what constitutes a public body for the purposes of FOIA and OMA. The OMA also describes “governing bodies” in its text. In the context of that law, “governing bodies” are those entities that operate as “governing bodies of the public body.” Thus, for Chicago State University, the hierarchy of “bodies” described in FOIA and OMA features the university’s Board of Trustees as the “governing body,” the university itself as the “public body,” with “advisory bodies” that include both the Faculty Senate and Student Government Association. 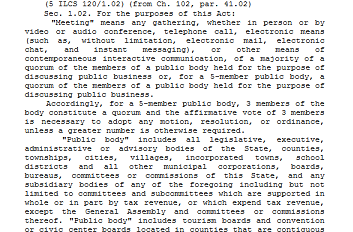 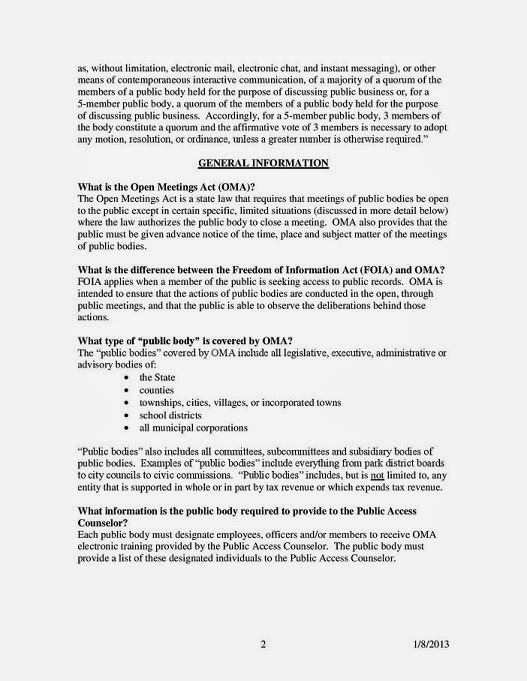 There are at least two other notable features of the Freedom of Information Act. Each public body “shall designate one or more officials or employees to act as its Freedom of Information Officer.” Each public body must also “prominently display at each of its administrative offices . . . a brief description of itself.” This description must include: “the identification and membership of any board, commission, committee, or council which operates in an advisory capacity relative to the operation of the public body.” For Chicago State, Patrick Cage formerly served as FOIA Officer, a title now held by Maria Mazza. Although FOIA requires that “A public body that maintains a website shall also post this information on its website.” I found no description on Chicago State’s website and I cannot recall ever seeing anything like the description required in the FOIA law posted in the Cook building. I have sent Ms. Mazza an e-mail requesting that required material. 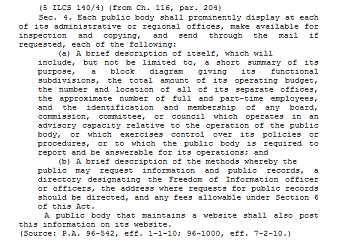 The FOIA and OMA laws, along with the advisory material from the Attorney General’s Office provide clarity in defining what constitutes a “public body,” creating a definition that both the Faculty Senate and Student Government Association seem to fall within. Thus, one might expect legal arguments made on behalf of both bodies to possess a certain degree of internal consistency. Of course, that is not the case here at Chicago State.

First, there seems little doubt that the Illinois Public Access Counselor considers the Student Government Association to be subject to FOIA. In a Review of a FOIA request dated October 24, 2013, Assistant Attorney General Shari West ordered Chicago State to provide the requestor the results of the student government election of May 1-3, 2013. Chicago State had refused to provide the results. The university’s legal team did not base its refusal on the fact that FOIA did not apply to the student government, but instead relied upon an assertion that revealing the results would expose the identify of a student who suffered disciplinary consequences as a result of the election. Unimpressed with Chicago State’s argument, the Public Access Counselor ordered the university to release the information, which it did. 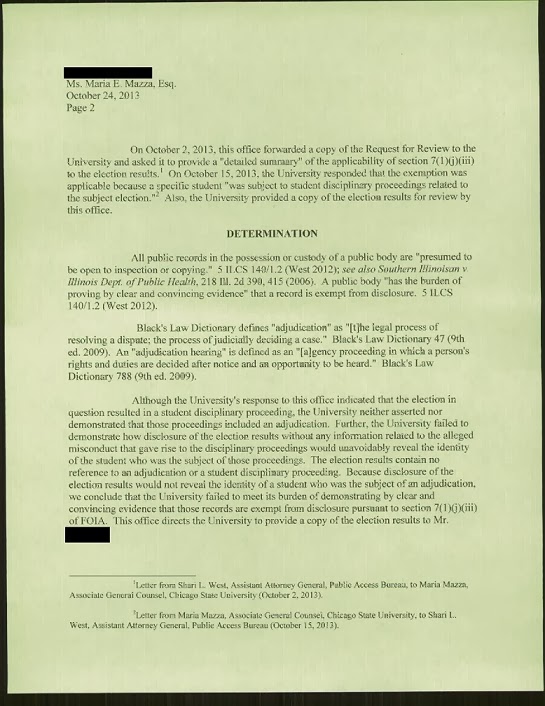 Moving forward to just a few days ago, the university provided a completely different argument in response to a student claim that the SGA had violated the Illinois Open Meetings Act. Perhaps most important, the university’s response seems to have made the student’s case even though it purportedly supported Chicago State’s contention that SGA was not, in fact, bound by the Open Meetings Act. Please pay close attention as this is likely to be like taking a trip into Wonderland.

Chicago State’s response to the Public Access Counselor begins with a description of the SGA’s function and describes the organization this way: “a student organization of the university.” The response goes on to say that “The foregoing demonstrates that the SGA is an independent student organization which operates as an ADVISORY BOARD . . . (capital letters mine) rather than a governing board of the university.” Please forgive me here, but does not that passage conform nicely to the Attorney General’s definition of what constitutes a public body? Not to mention the laughability of any claim that the SGA is “independent,” of Chicago State’s administration. Finally, we know that “governing board” applies to the university’s Board of Trustees.

The response gets even more convoluted as it continues. After quoting the OMA language, the university’s legal counsel goes on to explain how since the SGA is actually “an independent student organization whose role is ADVISORY (again, capital letters mine) . . . the Open Meetings Act does not apply to the SGA.” Wait, I thought advisory bodies were public bodies as defined by the Attorney General. I guess Chicago State knows better. The final two sentences capture perfectly the resplendent doublespeak of this response: “Although the University constitutes a 'public body' under the Act, the SGA does not qualify as a 'public body' as defined under the Act nor would the SGA constitute a subsidiary body of the University. Accordingly, the Act does not apply to the SGA.” Wow! I wonder how the Public Access Counselor will feel about that argument? 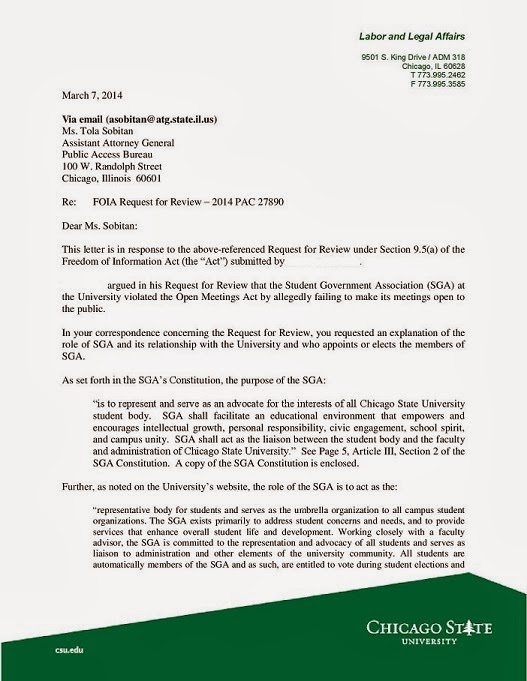 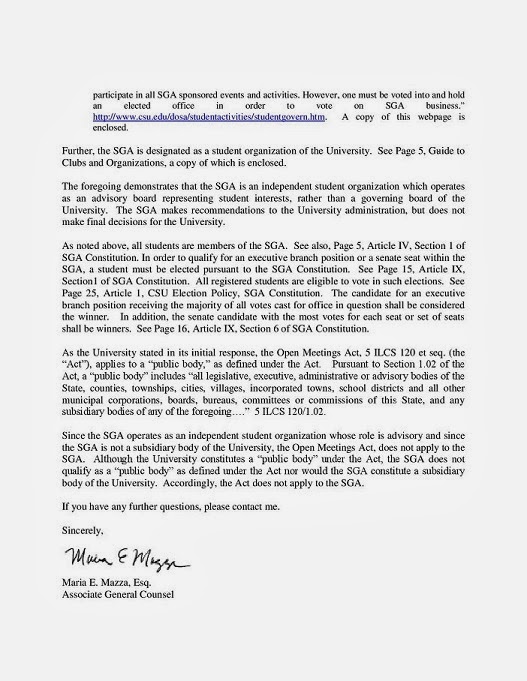 In contrast, Chicago State University clearly considers the Faculty Senate subject to the provisions of FOIA. The recent FOIA request from Patrick Cage demands that the Senate provide a number of records so that the university can decide whether it feels like accepting the results of recent Senate balloting on constitutional amendments. This raises the question for me of how one subsidiary body of the university can be a “public body” when the other is not. Would not the same arguments the university makes to reject a “public body” claim for the SGA apply equally to the Faculty Senate? Here I must defer to my learned legal friends because it has gotten far too complicated for my untrained mind.

However, there is one other problem with Cage’s FOIA request to the Senate. As Chicago State’s lead counsel, Patrick Cage has, in effect, submitted a FOIA request to another member of his legal team. This seems to me to mean that the university is submitting a FOIA request against itself. The questions raised in Cage’s FOIA have already been answered by the Senate, apparently not to the administration’s satisfaction. Since the Faculty Senate president has no intention of responding to the university’s FOIA (given the fact that he has already responded to the questions contained in the request), will Patrick Cage then report to the Illinois Public Access Counselor Chicago State’s failure to respond to Chicago State’s FOIA request against itself? What will he argue? Will the Public Access Counselor direct Chicago State to respond to itself? What will be Chicago State’s response? Stay tuned.

Once upon a time, Patrick Cage told the Senate’s Executive Committee that he “represented everyone at Chicago State,” or something to that effect. Given the consistent participation of Chicago State’s Labor and Legal Affairs Team in attacks against various faculty endeavors and institutions, I wonder if that is true. In any event, given the caliber of argument that comes from our legal staff, we just might be lucky to win any cases. What do you think?
Posted by Robert Bionaz at 6:29 AM