"If liberty means anything at all it means the right to tell people what they do not want to hear." George Orwell from The Freedom of the Press first published in the Times Literary Supplement, September 15, 1972. Accessed here: http://www.orwell.ru/library/novels/Animal_Farm/english/efp_go

Our university is apparently chock-full of people with delicate sensibilities. Persons who require protection from our intrepid administration because they are the victims of hostile, bullying behavior by other, truly horrible, members of the university community. Wayne Watson and his stooges are now in the process of creating a new narrative, built as usual around faculty culpability for all the problems that bedevil Chicago State. Enrollment declines? The bad publicity created by the faculty–things like lying on applications/resumes, cheating to get jobs for which they are unqualified–makes prospective students look elsewhere. The university’s poor, arguably laughable academic reputation? Again, the bad publicity created by the faculty– especially faculty who plagiarize their dissertations to acquire unearned Ph.D.’s, or “run to the media” with complaints rather than presenting them to the honest and scrupulously fair administration–presents the university in a bad light. Watson believes the Faculty Senate is “hostile” and apparently undermining all the wonderful efforts of the administration–hostility and a penchant for ham-handed vindictiveness and retaliation on the part of the faculty that resulted in the recent defeat in court and subsequent punitive damage award of $2.5 million against the university. He is appalled by the lack of “civility” demonstrated on the Faculty Voice web site–incivility on the part of the contributors to that site that includes ridiculous threats of law suits over non-existent trademark infringement claims– and has been forced to unleash his legal team in an effort to muzzle that site and stifle dissent. Against this backdrop of conspiratorial and damaging behavior, Watson, the quintessential consensus-builder, tries heroically to struggle along against the unreasoning and unreasonable attacks from his unspeakable enemies. Thank goodness he was able to single-handedly earn re-accreditation for the institution.

Our creative administration is prepared to unveil a new strategy. On the agenda for the March 7 Board of Trustees meeting is something called a “Cyber Bullying Policy.” I will discuss this in greater detail but I would first like to do a brief recap of how I believe such a policy came about.

In early November, I began posting evidence that demonstrated irrefutably that at least three university administrators: Angela Henderson, Cheri Sidney and Tyra Austin had lied on their resumes/applications. I also notified Human Resources of the falsehoods that appeared in the official records of two of these three persons. I received a response from Renee Mitchell that claimed knowledge of the lies and assured me that the university had “taken appropriate action,” an interesting assertion since appropriate action in case of falsification of university records is termination. Around this time, at a PEC meeting, Watson bemoaned the “incivility” of the Faculty Voice, and speculated that it might constitute “cyber bullying,” and Patrick Cage, according to his ridiculous assertion in the November 11 letter discussed below, claimed to have discovered the existence of the faculty blog.

On November 11, Cage sent his now infamous “Cease and Desist” order to Phillip Beverly, ordering him to “disable” the web site. Cage cited the blog’s lack of “content civility standards” as one of his areas of concern, although he failed to link that concern to his purported grave fears about the blog’s trademark infringement. You might remember the national ridicule generated by Cage’s letter and its obvious attempt to stifle the free speech rights of Chicago State employees. In response, several faculty members consulted an attorney who sent a letter to the university disputing Cage’s claims. The site continued to operate and its contributors continued to post pieces critical of the administration and several of its most prominent members. The site’s operator made some minor changes to its appearance.

These changes were apparently insufficient for our administration and its legal team. On January 3, a legal firm hired by the university sent another threatening letter to our attorney. This letter ordered the operators of the blog to place a disclaimer on the site that specified that its contributors were not speaking for the faculty “as a whole.” The contributors to the Faculty Voice have ignored that demand and have made no further modifications to the site’s appearance.

In mid-January, news about Angela Henderson’s plagiarized dissertation relegated discussions of trademark infringement to the background. As I described in a previous post, I discovered the dissertation on the UIC Indigo web site on December 14. A cursory examination revealed obvious plagiarism and by the time I finished going through the document, I found more than 80 passages taken verbatim from various sources with no proper attribution or even quotation marks. On January 14, a newspaper article detailed the plagiarism and the following day, an editorial appeared. Henderson’s plagiarism again exposed the university to national ridicule.

Watson’s response to all this is instructive. Given a second opportunity to protect the academic integrity of the institution, he chose to do nothing. As he had done for Sidney and Austin in the case of their lies on official university records, Watson allowed Henderson to remain in her position. Given pronouncements that he has apparently made in various contexts, Watson considers my exposure of the plagiarism to be the real problem.

As previously reported on this blog, immediately after the plagiarism revelations, Watson ramped up his attack on the legitimacy of the Faculty Senate. The recent memorandums threatening to eliminate the senate by February 26, 2014, if we failed to comply with our constitution and the ridiculous FOIA request regarding our election procedures demonstrate that Watson still desires to find a way to eliminate that pesky faculty governance body.

Now the university is moving to establish a “Cyber Bullying Policy,” that is simply another attempt at an end-run around the first amendment. I will post it here and you can make your own determination: 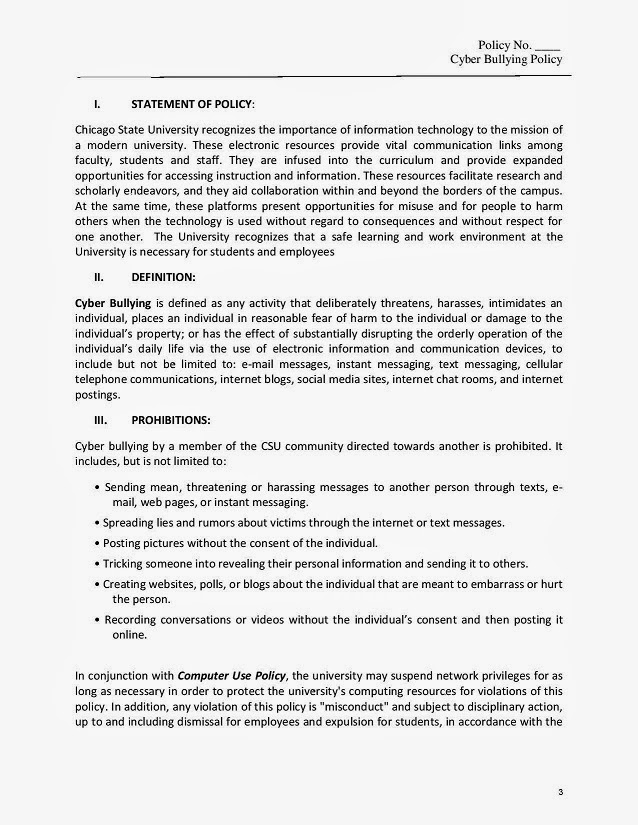 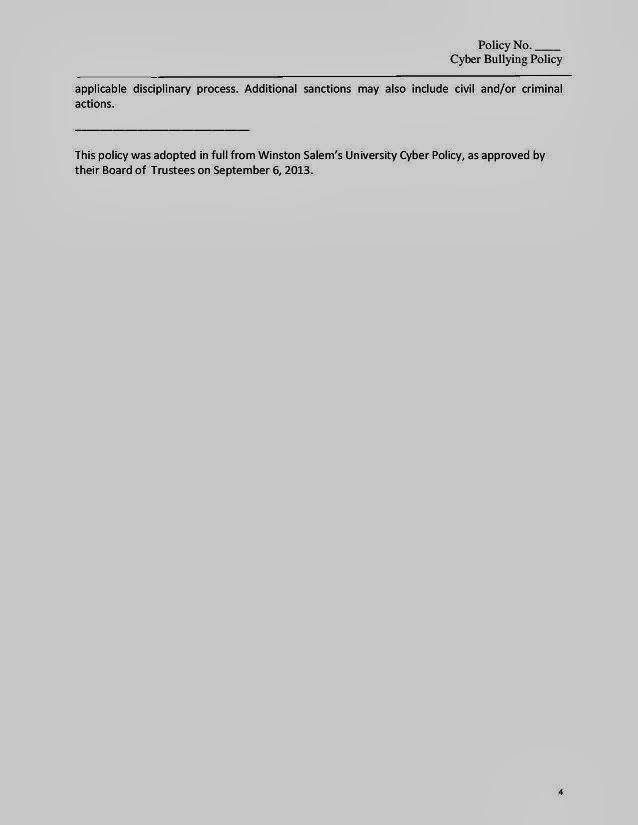 There are two major links between all the incidents I have just described: dishonesty and a basic lack of academic integrity. Given Wayne Watson’s history, I see neither as particularly surprising. The president of this university has done nothing scholarly since receiving his Ph.D. more than 40 years ago. He has, however, through political maneuvering and the tactics of bullying, intimidation and divisiveness succeeded in building himself a lucrative administrative career at the expense of the taxpayers of the City of Chicago and the State of Illinois. What do his accomplishments include?: precipitous drops in enrollment at both City Colleges and Chicago State during his leadership tenure, financial shenanigans that include gifts of scores of millions of dollars of public funds to political cronies and friends. These include Emil Jones’ family members, Watson’s chief shill Hermene Hartman and current member of the Board of Trustees Nikki Zollar. Watson has also rewarded friends and cronies with jobs for which they do not meet the qualifications and/or in which they perform incompetently (see Angela Henderson, Cheri Sidney and Tyra Austin for examples). Given the opportunity to demonstrate his allegiance to “academic rigor” a platitude he frequently spouts, Watson revealed his true beliefs by refusing to discharge employees who have exhibited common dishonesty and/or committed flagrant and serious violations of acceptable academic standards.

I can assure Watson that attempts to destroy this forum by establishing dubious policies will have no effect on our continued criticism of him, his administration and many of its functionaries. There is much more to be revealed and it will be brought into the light of day, there is nothing that anyone in the Cook building, on the Board of Trustees or in the State of Illinois can do to stop that. Truly, the worst is yet to come.

Posted by Robert Bionaz at 4:57 AM