Here We Go Again: Wayne Watson Named in Another Lawsuit. Please, Anthony Young and Other Board Members, Tell Us Again How Much You Support This Colossal Disaster

Wayne Watson and his various inept cronies in the Cook building might consider becoming current with their reading. I suggest a look at some Illinois statutes, particularly those that cover the reporting of misdeeds to appropriate agencies. Collectively known as the "Whistleblower Act," these laws are quite clear as to what employers may and may not do regarding persons in their employ who report possible violations of laws, rules or regulations to relevant authorities. Since Watson obviously learned nothing from the James Crowley lawsuit, I urge him to acquaint himself with at least these passages from the "Whistleblower Act."

"(740 ILCS 174/10)
Sec. 10. Certain policies prohibited. An employer may not make, adopt, or enforce any rule, regulation, or policy preventing an employee from disclosing information to a government or law enforcement agency if the employee has reasonable cause to believe that the information discloses a violation of a State or federal law, rule, or regulation.
(Source: P.A. 93-544, eff. 1-1-04.)"

"(740 ILCS 174/15)
Sec. 15. Retaliation for certain disclosures prohibited.
(a) An employer may not retaliate against an employee who discloses information in a court, an administrative hearing, or before a legislative commission or committee, or in any other proceeding, where the employee has reasonable cause to believe that the information discloses a violation of a State or federal law, rule, or regulation."

Unfortunately, it is already too late in one sense: looks like another bad week upcoming for the image of Chicago State as well as for the reputation of our vindictive and incompetent president. Another lawsuit filed yesterday in Cook County Circuit Court, this time by former Vice President of Administration and Finance Glenn Meeks, charges Watson with yet another “retaliatory discharge,” in violation of state Whistleblower laws.

Of course, the circumstances of this suit differ dramatically from those revealed in the recent Crowley case. Meeks alleges his firing occurred because he brought a number of, unseemly at best and possibly illegal at worst, Watson practices to the attention of former Chicago State Board of Trustees Gary Rozier on October 31, 2012 and told Rozier he (Meeks) would report his concerns to the Illinois Inspector General’s Office if the board did nothing. Ultimately, in February-March 2013, the board attempted to remove Watson from the presidency During this attempt, Meeks had a conversation with Governor Quinn in which he urged the governor to re-appoint the board members whose terms were expiring. The day after this conversation, Watson fired Meeks.

The Meeks lawsuit makes a number of allegations. The first four pages concern Watson’s improper relationship with Cheri Sidney and possible consequences of that relationship for the university. Much of this will be familiar to regular readers of this blog: 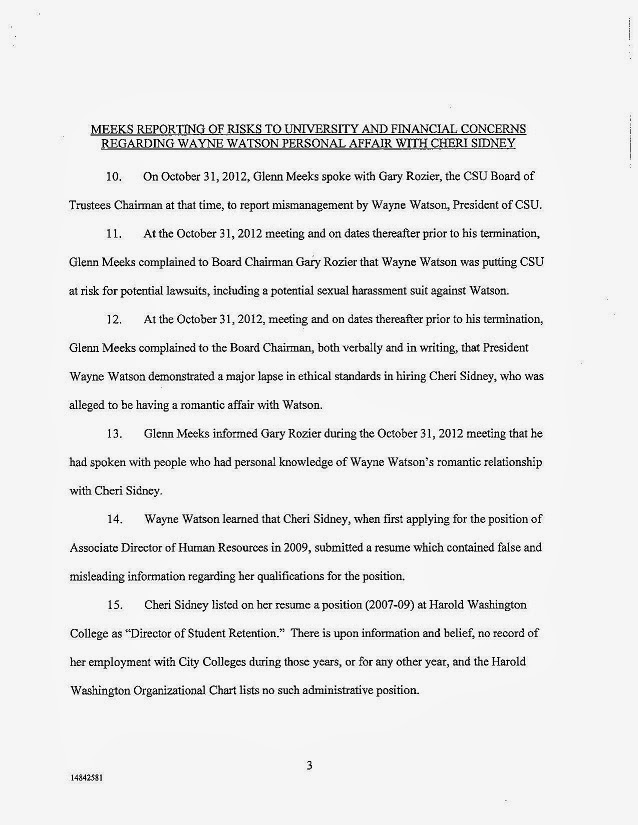 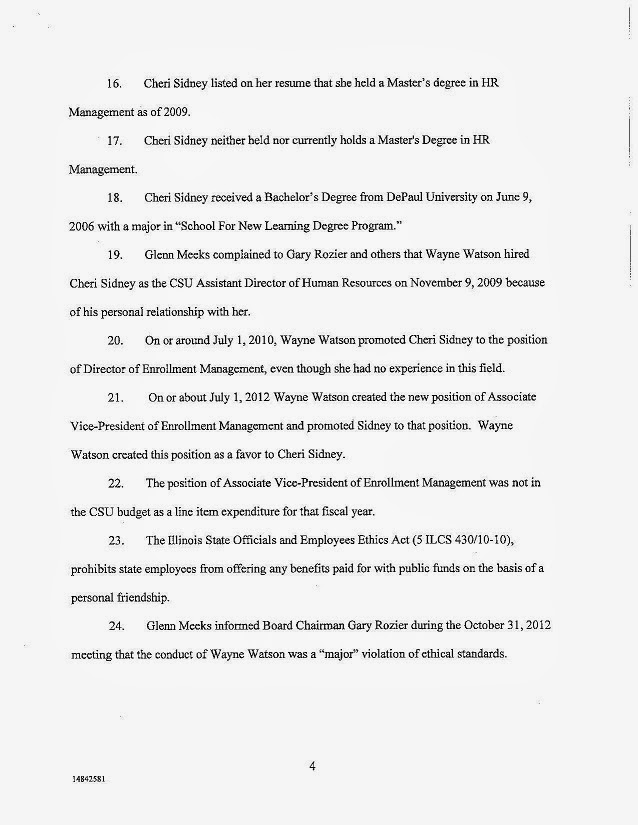 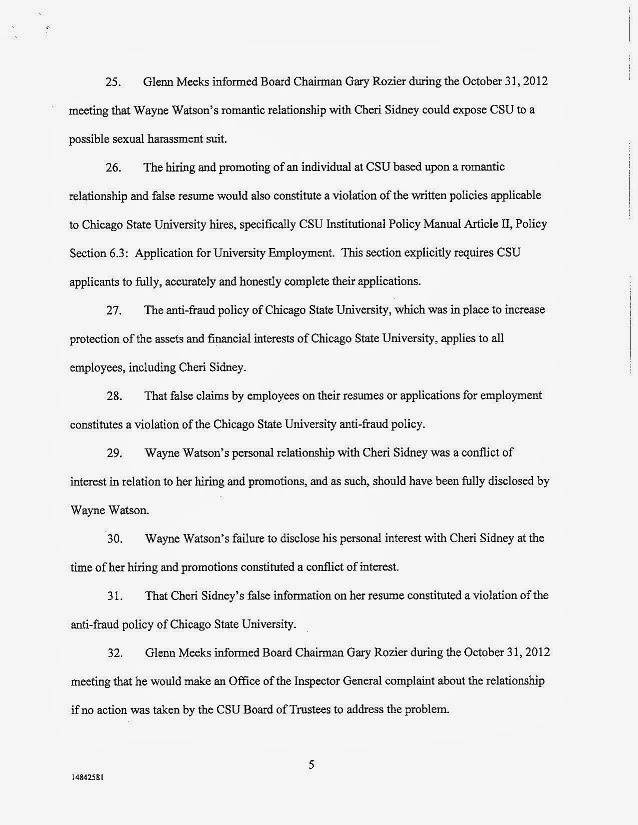 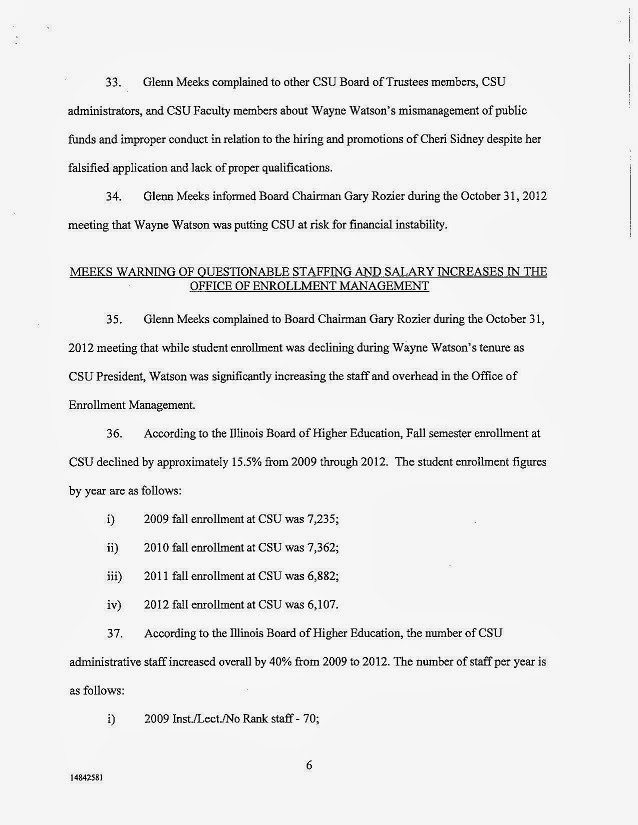 The allegations then move to the lack of qualifications of several top-level administrators and the mushrooming Enrollment Management section of the university: 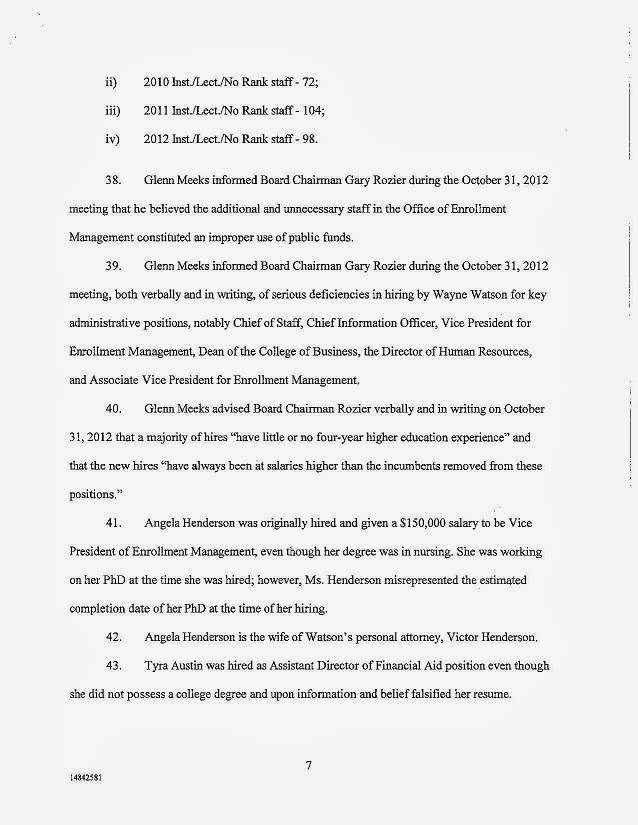 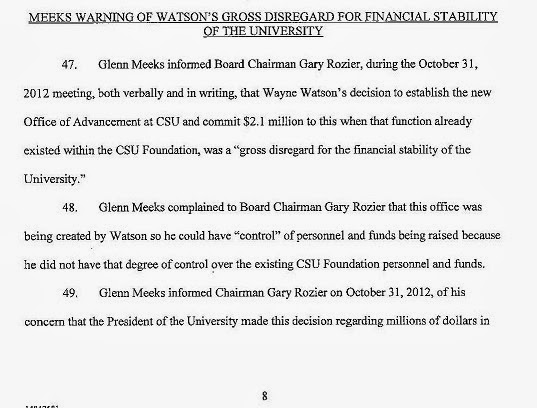 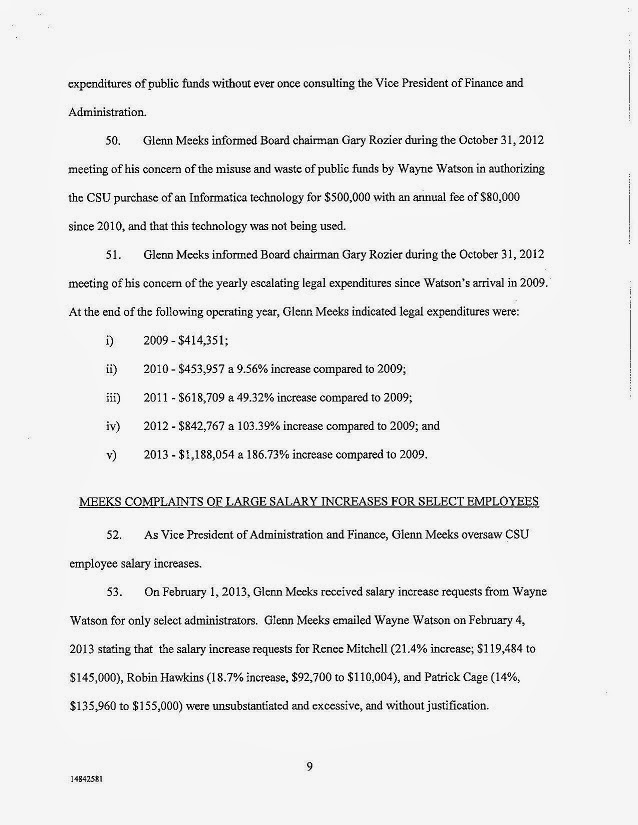 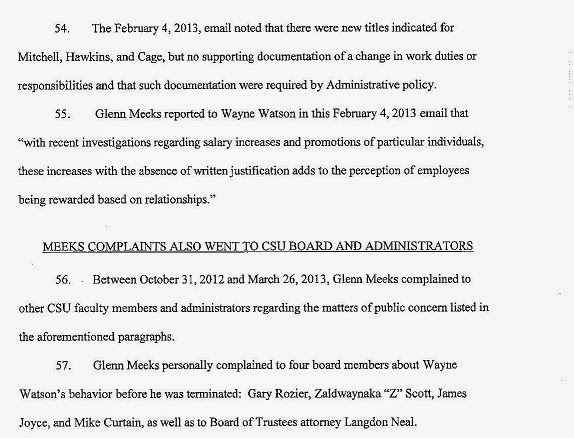 Finally, Meeks details his efforts to inform a number of individuals of the ongoing problems at Chicago State. Meeks made current board members as well as the Governor of Illinois aware of the situation at the school. 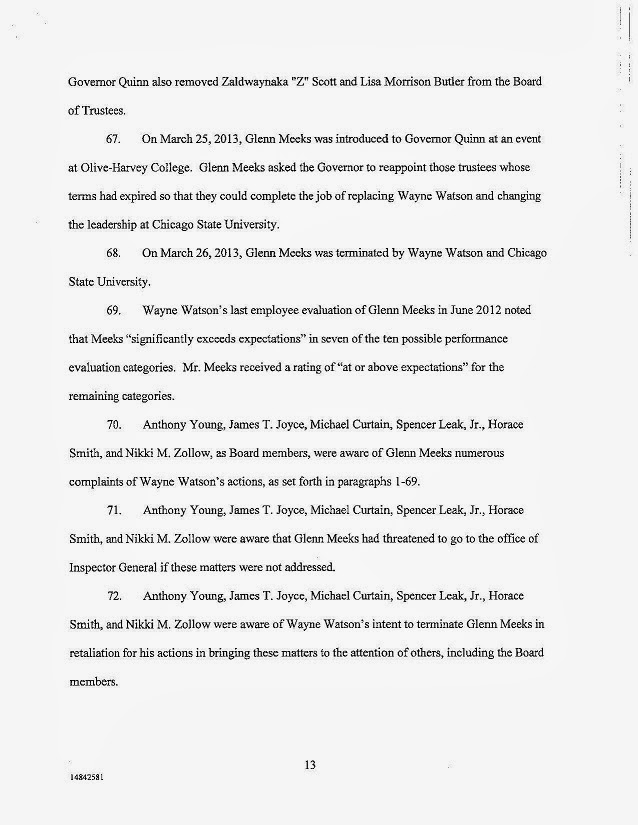 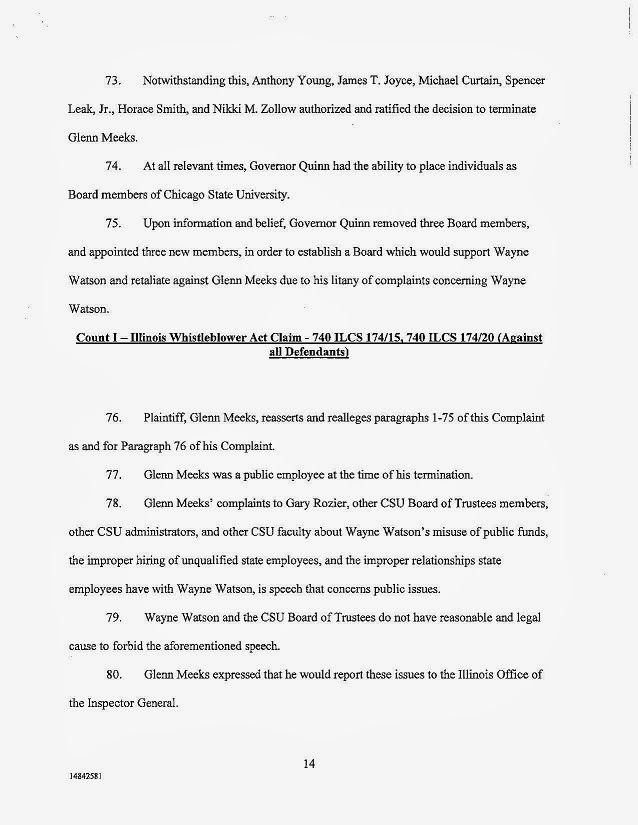 Now I realize that these are "allegations", although a number are supported by irrefutable documentary evidence already revealed on this forum. I also realize that this kind of persuasive evidence may not be enough to convince of Watson's unfitness for his position, persons who choose to stand up at the Board of Trustees meetings to proclaim that the "majority" of faculty do not support the opposition to Watson, or to admonish Watson's opponents that adherence to the chain of command is an absolute necessity in any organization, or to offer a "report" filled with unsupported accusations of "bullying" and abuse of students on the part of faculty.

Although there is no way of knowing how this action will play out, let us take a look at the opposing lineups in this case. On one side is Glenn Meeks and a substantial amount of documentary evidence supporting his allegations. On the other, an administration filled with persons who have demonstrated their mendacity and/or ineptitude on a number of occasions. How would you like to be supported by Wayne Watson, a self-proclaimed practitioner of employment discrimination, twice found culpable for retaliatory discharges, someone whose behavior relative to James Crowley a jury found so repugnant that they returned a unanimous verdict for the plaintiff after deliberations lasting less than one hour? Or Angela Henderson, someone who has demonstrably lied on both an employment applications and a resume, someone who cheated to obtain her terminal degree, someone who has become the butt of a number of jokes at Chicago State and who daily exposes the university to ridicule for its failure to demonstrate a commitment to academic integrity? Or perhaps Cheri Sidney or Tyra Austin? Two persons who lied on their applications/resumes and who both occupy positions for which they are unqualified. In Sidney's case benefiting from Watson's creation of a succession of responsible and highly-paid positions simply because of their romantic relationship. And let's not forget Patrick Cage, author of a number disastrous (and laughable) policies and legal papers. Frankly, I would be happy to take my chances against that gang of prevaricators and incompetents.

Of course, the ultimate price for this new edition of Watson's folly will be paid by the taxpayers of the State of Illinois. Thus far, the Crowley defense has cost the university close to $250,000 in legal fees, $3 million in judgements, with possibly another $500,000 plus in attorney costs for Crowley's attorneys yet to come. How much will the university spend to defend this suit? Stay tuned.

Posted by Robert Bionaz at 8:53 AM