How to Lose $3 Million: Here's How Watson and Patrick Cage Feel About Due Process, A Good Thing for Cronies, Not Applicable to Enemies

The recent $3.02 million judgement against Chicago State speaks volumes about how a Cook County Circuit jury felt Wayne Watson had behaved in terminating Crowley in February 2010. Even though Chicago State plans to appeal the verdict/award, the jury trial demonstrated Watson’s propensity for retaliation, vindictiveness and unfairness. The trial transcript also exposed Watson’s unwillingness to take responsibility for his own actions and the important role played in the entire sordid affair by Watson’s top hired gun, Patrick B. Cage.

In her opening statement to the jury on February 5, 2014, Tiffany M. Ferguson of Pugh, Jones and Johnson, P.C., the university’s attorneys, described Cage as “an experienced lawyer, experienced in how public colleges and universities work . . .” Of course, in the Crowley case, Wayne Watson had no involvement in the termination. Ferguson told the jury, “what you have to keep in mind is that the person that ultimately made the decision to fire Mr. Crowley is Patrick Cage, not Dr. Watson.” Although “Dr. Watson did sign off on the [termination] . . . letter . . . , but the decision-maker, . . . that was Patrick Cage.” Needless to say, according to Chicago State’s attorneys, the university had adequate cause to terminate Crowley, the reason: “[Cage] terminated [Crowley] for misappropriating university funds for purposes of preferential treatment.” After all, “everyone can understand that preferential treatment is just not fair.” 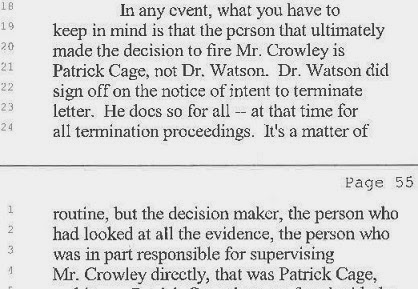 Of course, here at Watson’s Chicago State, we have a somewhat different interpretation of fairness and special treatment. Since November 2009, the university has doled out at least $962,817.91 in salaries to Watson favorites: $448,443 to Watson’s romantic interest, Cheri Sidney, at least $429,583.30 to long-time Watson crony Angela Henderson, and a relatively paltry $84,791.61 to the spectacularly unqualified Tyra Austin. (Information from FOIA requests, IBHE salary database)

Thus, on the first day of the trial, Chicago State’s attorneys made the case that the university behaved ethically in firing someone who was endeavoring to obtain unfair “preferential treatment.” They also explicitly placed the blame for the firing on the shoulders of Patrick Cage, absolving Watson of any responsibility. While Watson declined to take any responsibility for the Crowley termination, his attorneys gave him full marks for taking the university in an unspecified “new direction,” as well as” mak[ing] tough decisions.” Unfortunately for the university and Watson, the Cook County jury found these arguments unpersuasive and, judging by the size of the award, found plenty of culpability in the actions of Watson and Cage.

Of particular note in the trial transcript is the difference between personnel policies established by the Board of Trustees and the behavior of Cage and Watson regarding Crowley’s alleged offenses. Apparently Patrick Cage’s “experience” in colleges and universities did not translate into proper procedural steps in the case of James Crowley’s termination. Board policies regarding disciplinary actions that include termination are quite specific. The first step is a “meeting to discuss possible remedial actions by the employee or to discuss settlement of the matter.” Before meeting with the employee, the president or her/his designee “shall provide the employee with a written statement of the purpose of the meeting, including an identification of the topic(s) to be discussed.” In the second step, within six months of this original meeting, the president “shall provide the employee in writing with one of the following: . . . (v) a notice of intent to seek termination.”

The final steps involve the requirements for notice and specify the employee’s rights. If the president decides to terminate an employee, he/she will “provide . . . a statement of reasons for termination to the employee. . .” The employee then has the right within fifteen days to “request a formal hearing before a committee of five members selected from the administration.” The hearing will be recorded “verbatim” and ultimately that recording and all documentary evidence will “be submitted in writing to the Board for final action.” Most important, the “burden of proof that adequate cause [for termination] exists rests with the university and shall be satisfied only by clear and convincing evidence of the record considered as a whole.” In sum, this procedure constitutes due process for non-unionized university employees facing possible termination. 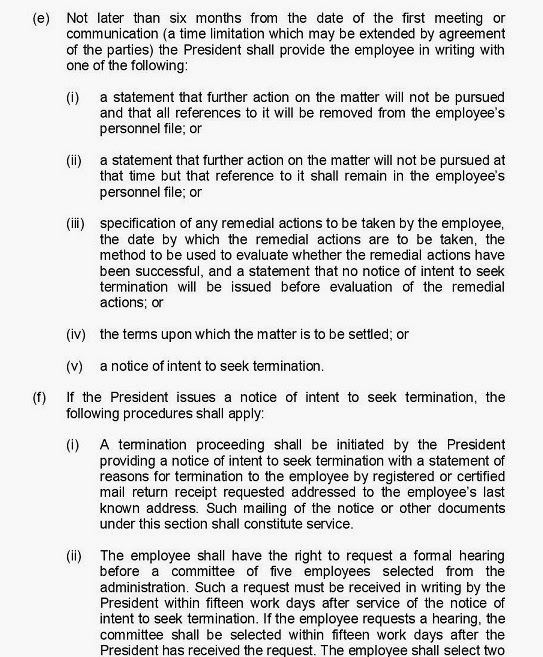 How did the university handle Crowley’s termination? By his own testimony, he met with Patrick Cage sometime in late December 2009 or early January 2010 to advise Cage of financial improprieties which may have resulted in audit findings. Crowley testified that he told Cage that the improper financial processes had to stop or he (Crowley) “was going to go to the attorney general’s office about it.” According to Crowley, Cage said that “he would look into it.” Crowley heard nothing further until February 1, 2010, when he “was told to come to Patrick Cage’s office, and he was waiting with a police officer, and they told me I had to leave.” Crowley went home and heard nothing from the university until he received an e-mail summoning him to a meeting with Cage on February 19, 2010. During this meeting, which Crowley testified lasted about five minutes, Cage told Crowley that “they were looking into my transactions, and that it would be better for me to just admit things I had done wrong rather than [have the university] uncover them on their own.” According to Crowley’s testimony, Cage provided no specific allegations, but a “couple of days later,” Crowley received a “termination letter” in the mail. This particular termination does not seem to conform to the due process requirements of the Board regulations. 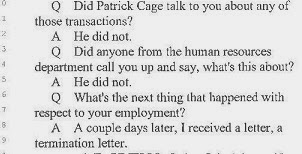 As we already know, when Crowley decided to release FOIA material to which Watson objected, he became, Watson’s “enemy.” This is how Chicago State’s administration treats Watson’s enemies. In particular, Patrick Cage was diligent in ferreting out Crowley’s various misbehaviors. In this instance, Cage’s doggedness mirrors his continual attempts to destroy free expression on this campus. Cage has demonstrated a propensity to attack anyone with the temerity to question the administration of Wayne Watson. In the process, he has made ridiculous arguments and engaged in behavior that has brought the university nothing but public ridicule. Some examples include his argument that FOIA information sought by the Chicago Tribune in 2012 was exempt because the Tribune had written mean things about Chicago State. Here, the attorney who, by my calculations has collected nearly $600,000 in salary from Chicago State since 2009, and who apparently does not know the difference between "tenets" (as in main principles) and "tenants" (as in persons who rent) makes the following brilliant legal argument: 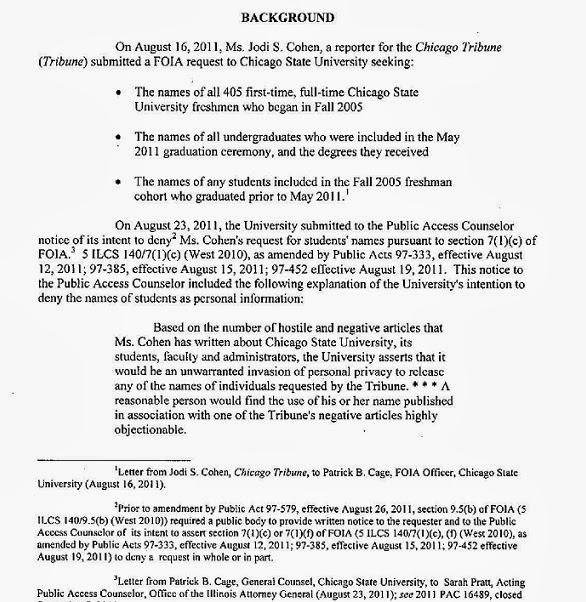 Cage's argument failed to impress the Public Access Counselor who ordered the university to comply with the FOIA request and opined:

Other examples of Cage's apparent commitment to censorship and opposition to public scrutiny of the administration's activities include: the Computer Usage and Communications policies of 2012, that although ostensibly not emanating from the Legal Department, must have at least been vetted by someone there; the on-going attack on the Faculty Senate’s legitimacy in 2013, and the FOIA request Cage submitted in an obvious attempt to have the Senate’s amendment election overturned; the absurd trademark infringement argument which is designed to stifle dissent by destroying the CSU Faculty Voice; the participation of the Legal Department in the “See Something, Say Something,” campaign of the SGA, which is actually the brain-child of Wayne Watson, and finally, the “Cyber-Bullying Policy” now wending its way through the Board of Trustees procedural path. Several of Cage’s efforts at establishing censorship on this campus have resulted in scathing negative press coverage and open ridicule of the Chicago State administration.

In contrast to the energy expended on efforts to destroy faculty dissent and stifle criticism of the administration, neither the administration nor Cage has any interest in addressing significant challenges to the institution’s academic integrity: administrators who have demonstrably lied on their applications/resumes continue in their positions, even receive promotions, an interim Provost who obviously plagiarized her dissertation continues in her position, doing daily damage to the school’s academic reputation, while Watson clucks about “due process” and worries about her rights being violated.

All this contributes to the face of cronyism on this campus. Disparate treatment is the order of the day at Chicago State. If you are “in” with Watson and his cronies, you can do basically anything. If you are “out” you had better watch your step. Jim Crowley found that out in 2010. Fortunately for him, Watson and his acolytes did not have the last word. Unfortunately for us, the same crowd that has cost the university more than $3 million continues in power, supported by an ethically compromised Board of Trustees and do-nothing governor. How many more wounds can the university endure? I suspect we will find out.