During the five-plus years he and his cronies have blighted this university, Wayne Watson and his administration have advanced a number of false narratives in support of his failed presidency. Given the looming enrollment debacle for Spring 2015, Angela Henderson recently articulated the latest iteration of bullshit that steadily emanates from the Cook building. Here it is:

On Tuesday, in two separate meetings I attended, she made the assertion that our average enrollment decline from Fall to Spring numbers around 800 students. In front of the Faculty Senate, she took this assertion in a ridiculous direction, claiming that even though that morning’s enrollment figure—632 fewer students than ultimately registered for the previous Spring semester—was “pretty good” compared to our average loss of 800 students between Fall and Spring.

Of course, our intrepid administrators often forget that a documentary record frequently exists to expose their falsehoods. In this case, it is the audit reports on the Illinois Auditor General’s web site. These reports reveal enrollment data for Chicago State University for each semester since Fall 2004. Thus, ten years of information exists against which we can test Henderson’s claims. That data reveals their falsity and also demonstrates a previously unexplored dimension of Wayne Watson’s epic enrollment failure.

First, the average enrollment decline from Fall to Spring semester for the past 10 years (20 semesters from Fall 2004 through Spring 2014) is 355.3 students per year. Enrollment from Fall to Spring has declined in all of those school years (2004-05 through 2013-14) with the range being a low of 182 students in 2009-10 to a high of 620 students in 2011-12. So any claim that we lose an average of 800 students per school year between Fall and Spring semesters is either pathetically uninformed or intentionally deceptive. Is it really possible for the Provost of a university to be that ill-informed about her school's enrollment trends? 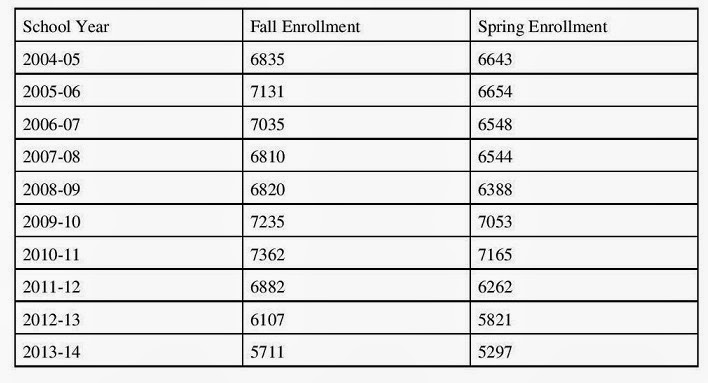 Of course, in early December, our administrators were talking about an enrollment goal of 5597 students, which would have been an unprecedented increase of 300 from the Fall semester. Maybe someone should have consulted the historical trend data before coming up with that ludicrous figure. Right now, it looks like we will struggle to hold the next decline to under 5 percent. 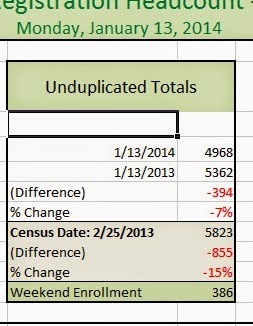 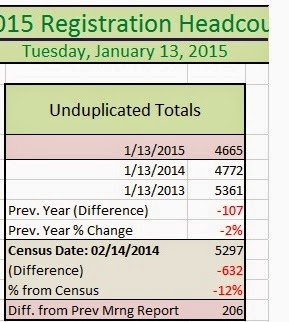 During the presidential campaign of 2000, the moronic George W. Bush used the term “funny math” to disparage some of Al Gore’s claims. It looks like here at Chicago State we have developed our own version of “funny math.” We use it to fool the rubes.

Posted by Robert Bionaz at 5:00 PM