An Update on Enrollment: Not Too Good

Here is the most current enrollment data from the administration: Total headcount: 4668, FTE count: 3578. In Fall 2010, when the enrollment decline began, the headcount stood at 7362 with an FTE total of 5464. Thus, Chicago State now enrolls 63.4 percent of the 2010 population with 65.5 percent of the Full-Time Equivalents. Of course, that means that our enrollment has dropped more than one-third since Fall 2010. As I mentioned in my earlier post, please note the discrepancies in the headcount and FTE numbers actually reported on January 21, 2014 and the 2014 numbers reported on January 21, 2015. The numbers reported in 2015 make the difference between 2015 and 2014 levels significantly smaller. As you can see, the actual 2014 headcount was 5284. In this year's report, that number has been reduced to 5052. Using the number actually reported in 2014 changes the previous year's drop to 616 from 384 and the percentage decline to 11.7 percent instead of 8 percent. Similarly, for the FTE number, the actual number reported in 2014 was 3969 instead of 3873. Using the 2014 figure increases the FTE drop to 369 from 296, and increases the percentage drop to 9 percent from 8 percent: 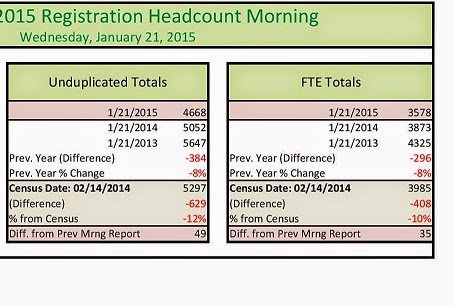 How bad is this? If Chicago State were a business, we would be awash in red ink. Although I expect our Spring enrollment to increase between now and the February 12 census date, we are looking at another semester, our ninth consecutive, of enrollment losses. I estimate our Spring 2015 decline will be between 6 and 8 percent. This simply underscores the fact that all of our enrollment numbers (or “metrics” if you prefer) for the past 4 and one-half years are dismal. Here’s a catalog:

Between Fall 2010 and Fall 2013, Chicago State suffered the sixth highest enrollment decline among 257 universities and colleges; public non-reasearch institutions and Thurgood Marshall Scholarship members. In Fall 2013, our enrollment decline since 2010 stood at 22.6 percent. In the past three semesters, the decline has increased to 36.6 percent.

Across the United States between the same years, enrollment in these 257 schools dropped a total of 3217 students out of a total of 2.5 million. Compared to Chicago State’s 22.6 percent drop, the national average was a 0.1 percent decline.

Compared to the four other former Board of Governor’s universities in Illinois, our enrollment decline is more than twice that of the average of those four other schools: 9.1 percent. Needless to say, we are the worst of that lot. 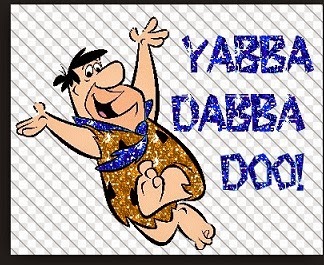 The administration has resorted to a number of tactics to spin the enrollment disaster and to blame it on anyone but themselves. Let us take a look at some of these rationales and evaluate them based on the existing data.

First: Chicago State’s enrollment drop simply reflects what is going on today in higher education, lots of schools have lost students. Analysis: LIE. Our enrollment decline is one of epic proportions, close to the worst in the nation. Of the 257 schools I analyzed, more than 110 have actually increased their enrollments during the 2010-13 period. Chicago State’s enrollment decline is virtually unparalleled and is certainly unprecendented given the school’s long history.

Third: We are “right-sizing” the university. Analysis: WHOPPER OF A LIE. This bullshit has been spread around by a number of administrative hacks, including our reputed president. This narrative just recently became popular, obviously a response to the continued bloodletting caused by our students leaving in droves. Recently, Watson claimed that the desirable level was 5200-5000. What will it be next? 4000? 3000? It all depends on how low the enrollment sinks and whether or not the state will allow the university to continue to exist.

Fourth: Enrollment will stabilize this Spring. Analysis: LIE. Watson spouted this nonsense at the most recent Board meeting. Even by early December, the data suggested we were poised for another enrollment decline. Nonetheless, Watson expressed “hope” that the policies and practices developed by his crack “team” would stem the bleeding. Does not look likely.

Wayne Watson has never taken responsibility for anything adverse in more than 20 years as an “administrator” of institutions of higher education. The recent course-cutting fiasco can be laid at the feet of the administrators responsible for cutting courses. Their decisions were so awful that they negatively affected dozens of students. In response, the administration has stupidly decided that what is necessary is a two-year teaching schedule for Chicago State’s faculty. This “urgent request” for two-year schedules was first communicated to faculty two days ago with a deadline of today for submission. Now, we have been given until the end of the month to comply with this ridiculous request. Here’s the charge from one of our administrators: “I just want to inform you that we must take this two-year plan very seriously: Review enrollment/trend data for a number of past semesters, including the semesters for which I sent you data, consult with faculty in your program, and try two develop a plan that would minimize or eliminate the need for course cancellations.”

So, we are supposed to do all those things and create a schedule for the next two years (including Summer session) between now and January 31. All that in order to insure that necessary courses are not cut by our administrative drones. After all, the most recent course cancellations were the faculty’s fault. Of course, the latest imperial edict ignores the most important variable in the entire process: our enrollment.

This is a university in dire straits with an administration incapable of addressing any of our major problems. Compounding that are middle managers who do nothing but pass along the administration’s latest idiocy and expect the faculty to hop to it. Does anyone’s Chair ever say no to these foolish and unnecessary administrative requests? Do the Deans?