As I said upon concluding my previous post on this topic, the university’s yearly reports to the Illinois State Legislature do not include any reference to new positions for either the Director of the Master of Public Health Program or for an Interim Assistant Dean in the College of Health Sciences. Below are the 2012 and 2013 (fiscal year) ISL forms for reporting the university’s intent to fill existing vacancies and detailing its requests for new personal services positions: 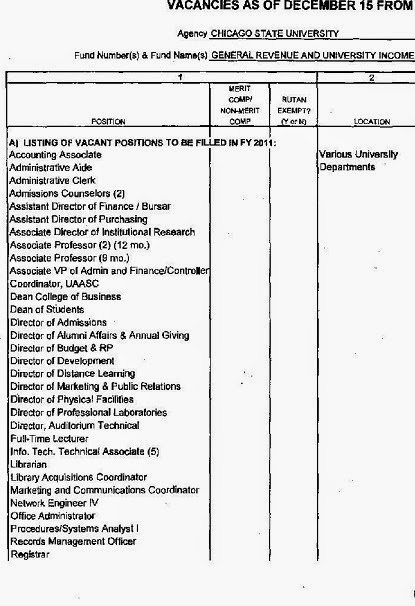 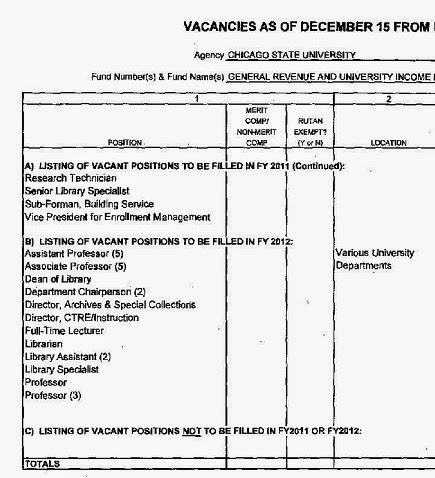 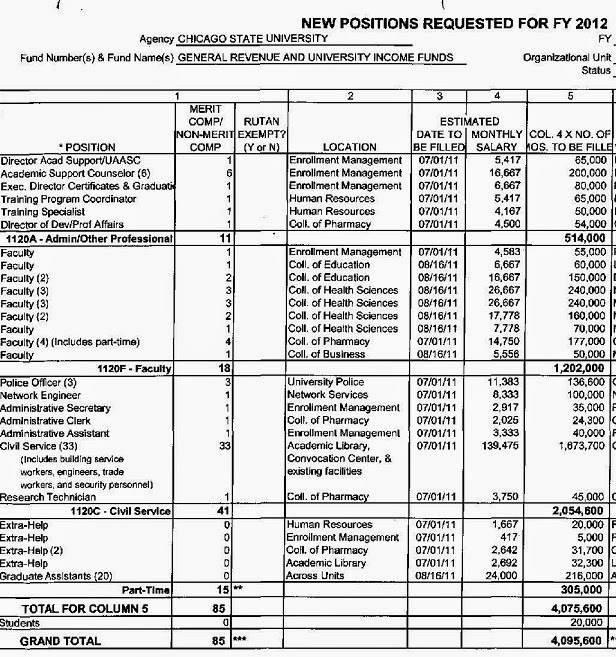 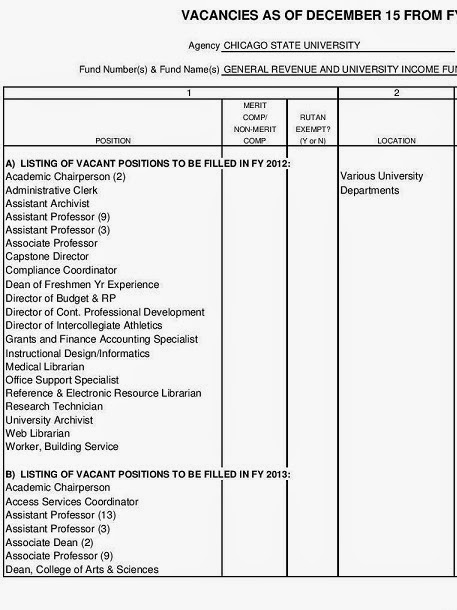 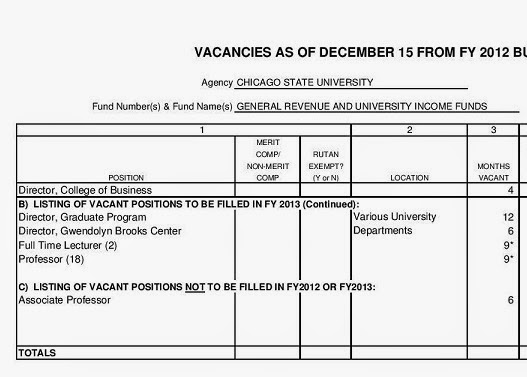 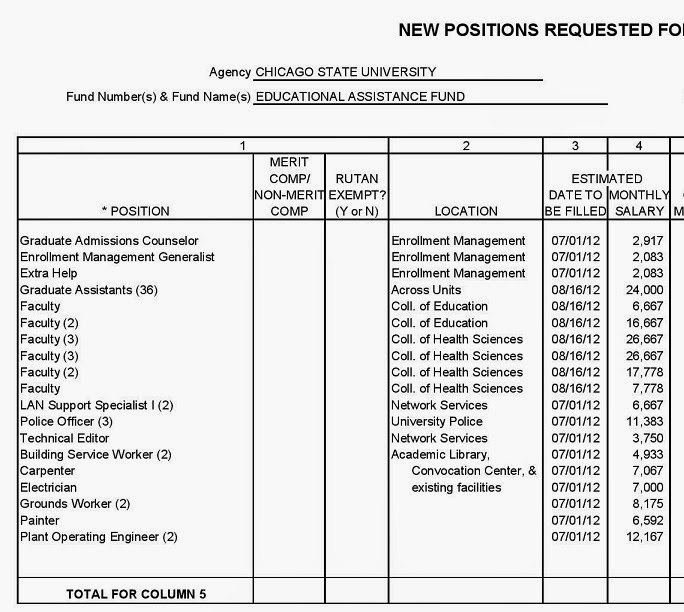 The university also catalogs all new hires on the yearly ISL forms. For Damon Arnold’s 2011 hiring, the university reported to the legislature that Damon was a “replacement” hire, indicating that he had been hired into an existing budget line. Of course, since Watson had created the position for Arnold sometime in late Summer or early Fall of 2011 and since Arnold became the one and only occupant of the position, calling his hiring a “replacement” hire is simply inaccurate. Below is the ISL form for fiscal 2013 showing Damon’s hiring on October 3, 2011:

In fact, hiring anyone in October 2011 to administer the M.P.H. seems completely unnecessary. When Arnold began his job as a “program director” the program--which had received IBHE approval in June 2010--included four students and no staff, hardly taxing the resources of the Health Studies Department or the College of Health Sciences. There was no discrete budget sub-unit listed in the university budget, the M.P.H. program simply existed within one of the departments in the College, like most other graduate programs at the university. In the nine months Arnold “directed” the program, it grew to 12 students. Last fall, 17 students were enrolled in the M.P.H. program. I believe that there are a number of people at this university who “direct” graduate programs with more than 12 students. To the best of my knowledge, none of them receive $140,004 for their efforts. Below is the entry from the 2013 Chicago State University Factbook (23): 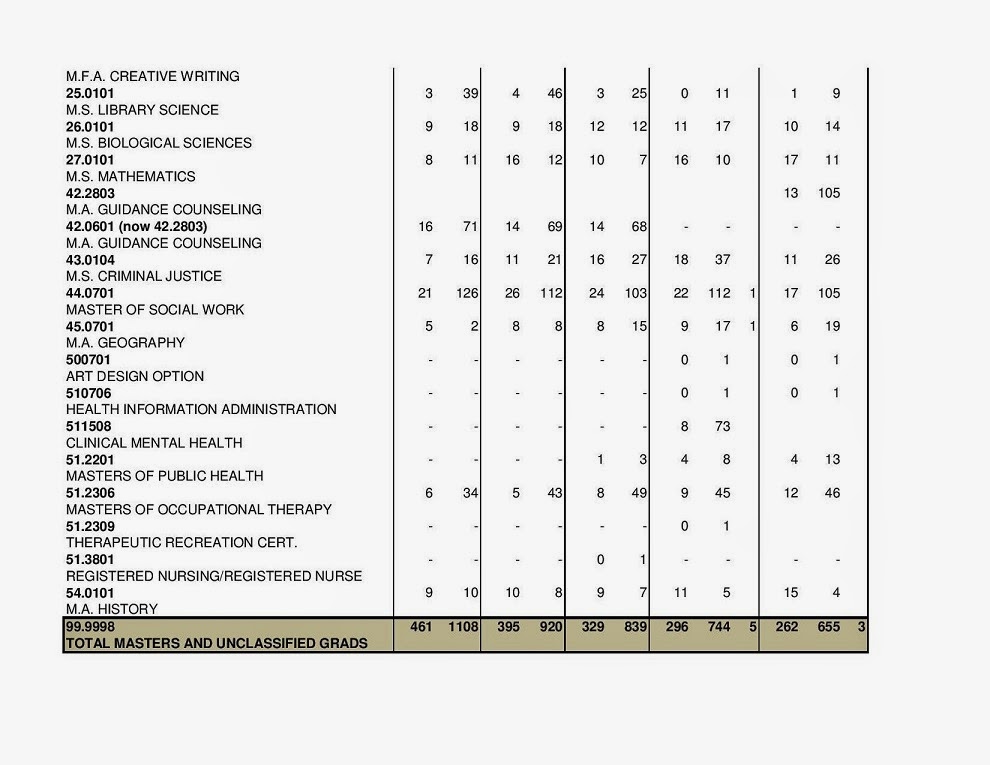 To summarize, Wayne Watson hired Damon Arnold on October 3, 2011 at a salary of $140,004. Watson hired Arnold into a position for which neither a job announcement nor funding existed, necessitating the hasty creation of a job announcement as well as the movement of money from other accounts to cover Arnold’s hefty salary. Arnold’s responsibilities included providing “administrative, academic and intellectual leadership,” (typical empty Watsonian rhetoric) for the program. Thus, Arnold received $35,001 for “leading” each of the four students enrolled in the program.

Both budgets include appropriated amounts that are, in effect, discretionary. Western Illinois' budget includes $5.3 million for "contingency" and vacant positions. Chicago State's operating budget features discretionary expenditures of $7.4 million, or 40 percent more than the amount in the Western Illinois budget. As a percentage of the total budget, Western Illinois' discretionary appropriations come to 5 percent of the total personal services budget, less than one-half of Chicago State's 11.7 percent. Here, I must admit that it is possible I am misconstruing the significance of the budget entries, but it seems like in comparison with Western Illinois' two categories of discretionary spending, Chicago State possesses eleven. Western Illinois' budget includes a "contingency fund of $3.1 million (compared to Chicago State's $2.9 million), and vacant positions totaling $2.2 million. In contrast, Chicago State has two categories of vacant personnel positions: 1) vacancies for specific budget lines, listed as "pending hires," which total nearly $1.9 million and a category of "personnel budget", mainly non-specific budget lines (some are associated with a specific class code) in various budgetary sub-units that total nearly $690,000, bringing Chicago State's total of funds available for seemingly "vacant" positions to over $2.5 million. The money for Arnold's 2012 promotion to Interim Assistant Dean came from these types of funds. Chicago State also has what looks like money earmarked for discretionary expenditures tucked into accounts called "reserves" and "pools" for the Deans of all the school's colleges. These amounts are separate from the monies in the "pending hire" or "personnel budget" categories. As I said before, I am not a budget expert, but it seems like Chicago State has a lot of spare change just lying around.

Watson’s hiring of Arnold raises a number of questions for me. How can a $140,004 salary for someone with the responsibility for a program with only four students and no staff be justified? Why did Watson create two new (and unfunded) positions in which to place Arnold? Why is there no record of the university requesting appropriated funds for his current position? Is Arnold’s current position now funded or is the university still moving money around to pay his salary? In a college with basically stable enrollment since Fall 2009 (940 to 955 in Fall 2013) is another highly-paid administrator necessary? In addition to the Dean and the Assistant Dean (both interim appointments) the university’s 2014 budget still includes $81,586 for two additional positons: Associate Dean and Director of Graduate Program. Perhaps that money is still needed to partially fund Damon Arnold’s salary.

I am not suggesting that Arnold played any role in the various machinations that brought him to Chicago State; I have no evidence to that effect. I am also not suggesting that my interpretation here is the only explanation for the way Watson hired Arnold. If there is an alternative account, I would be pleased to hear it and I would be happy to have any factual errors I have made corrected. Absent those potential corrections (and perhaps even in spite of them), this looks to me like a crony hiring. As I said about Tyra Austin’s 2012 hiring, if it looks like a duck, walks like a duck and quacks like a duck, it is likely a duck.

Posted by Robert Bionaz at 4:42 PM