At the Chicago State University Board of Trustees meeting on December 13, 2013, Dr. Damon Arnold, the Assistant Dean of the College of Health Sciences, gushed enthusiastically about Wayne Watson, saying “The reason I came to CSU . . . is because of the leadership of Dr. Watson . . . I think president Watson is doing a phenomenal job. . .” Just last month, Dr. Arnold pontificated about his belief in the importance of the “chain of command” and excoriated Watson’s faculty critics for their failure to follow Watson without question. Talking about own career, which included considerable military service, Arnold said: “If I did not support my chain-of-command, I would not be standing in front of you today . . . You guys really ought to start checking yourself out . . .” (recordings of Arnold’s comments are available on the Chicago State Board of Trustees portion of the CSU web site).

Although I have no reason to doubt Dr. Arnold’s sincerity, and I am not suggesting that he is a “crony” of the Chicago State president, he nevertheless came to Chicago State through a remarkably irregular process that offers a textbook example of patronage or crony hiring. In fact, a recent FOIA response from the university reveals the various steps involved in a “rigged” hiring: no competitive application or hiring process, the creation of a well-paid and unfunded new administrative position, documents created in order to cover the administration’s tracks and provide the imprimatur of legitimacy for the process, the complicity of a number of university offices and a desire to keep secret the identity of the responsible parties, and a shell-game to make unfunded positions appear as appropriated budget lines. The ultimate result: a newly-minted, highly-paid administrative employee, one who can be expected to be a “loyal soldier.” Surely, Arnold has not disappointed.

Because there has been controversy over various hirings at Chicago State since the beginning of the Watson regime, it seems appropriate to review the way a legitimate hiring occurs. First, there is an extant budget line for the position; second, a job announcement details the qualifications for the position, third, the university accepts applications from candidates for the position; fourth, designated university employees (not always members of a search committee) winnow the applications and come up with a list of candidates to interview; fifth, authorized university representatives conduct interviews and recommend candidates; sixth, the appropriate administrative official makes a hiring decision and tenders an offer to the applicant. As we have seen on several occasions here at Chicago State, in a number of hirings, this process has not been followed properly. In Arnold’s case, however, Wayne Watson did not even make a pretense of adhering to established hiring protocols.

Requested budget appropriations apparently proceed from the requestor through the Office of Budget and Resource Planning at Chicago State to the appropriate administrative officials and ultimately to the Board of Trustees for approval. Requests for new funded positions and their appropriations appear on the annual reports that Chicago State files with the Illinois State Legislature. The two sources of funding for appropriated expenses are the State Education Assistance Fund (which includes grants) and the Income Fund (which includes tuition revenues). Positions that are not part of the university’s annual approved budget are unfunded, which means money must be transferred from an existing account to pay the salary of anyone hired into an unfunded position.

In a proper hiring, a vacant position is listed on the university budget by position number (A prefix for administrative, F prefix for faculty) as a “Pending Hire.” There is also a dollar amount listed as the appropriation for the position. Each appropriated position includes both a position number and a class code. These numbers identify each individual position within a specific budgetary sub-unit. When a new employee is hired into a vacant position, her/his name becomes attached to the extant position and class code numbers. Positions created in an extraordinary (or improper in some cases) way feature new position and class codes. During the past several years, Watson has created new positions out of whole cloth at least nine times for five different persons, with the cost to the university being substantial: In 2009, Watson hired Cheri Sidney into a non-existent (until the university created it) $90,000 per year job. He subsequently promoted her in 2010 to another non-existent position at $95,004, and in 2011 to another non-existent position at $110,004. In 2012, Watson hired Tyra Austin into another non-existent position as Assistant Director of Financial Aid at $55,000 per year. This position still had not been funded as of the most recent internal operating budget, resulting in a total cost of $110,000 in unfunded salary. In 2012, the Criminal Justice hiring resulted in three persons being hired at a total cost of $233,010. The original budget appropriation for one position in Criminal Justice amounted to $51,000. Thus the unfunded amount for the three new faculty came to $182,010. In October 2011 (fiscal year 2012), Watson hired Damon Arnold at a salary of $140,004 into a non-existent position as Director of the Master of Public Health Program in the College of Health Sciences.

In addition to having to come up with the money to cover new hires, the university must comply with EEOC and Affirmative Action laws which ensure equality of opportunity in employment. In the state of Illinois, the Human Rights Act (775 ILCS 5/) requires in hiring:

In previous rigged hirings, the administration at least made a cynical attempt to appear to comply with the provisions of the Human Rights Act. There were job announcements and even putative searches. However, in Arnold’s case, Watson dismissed with even the pretense of following the law. The Arnold hiring unfolded like this:

In the Summer of 2011, Damon Arnold held the position of Director of Public Health for the State of Illinois. His 2010 salary in that position totaled $147,350.05. For some unfathomable reason, Arnold was obviously in the process of negotiating with Wayne Watson for a job at Chicago State University. On August 26, 2011, Watson sent Arnold a letter that began “I am pleased to inform you that you have been appointed to an administrative position as Interim Director of the Master of Public Health Program in the College of Health Sciences at Chicago State University (CSU), effective September 1, 2011. . .” Watson's letter follows. (You'll notice that signatures and dates have been redacted although those are not exempt from disclosure under Illinois FOIA law. I am in the process of obtaining unredacted copies of these letters and the other documents the university supplied in response to my FOIA request): 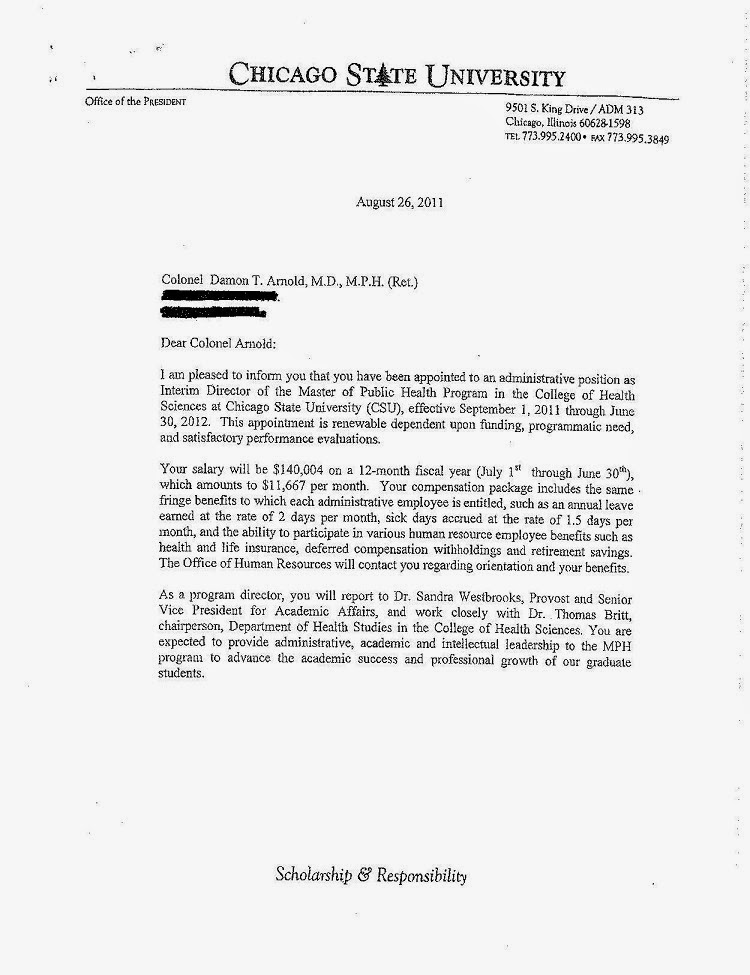 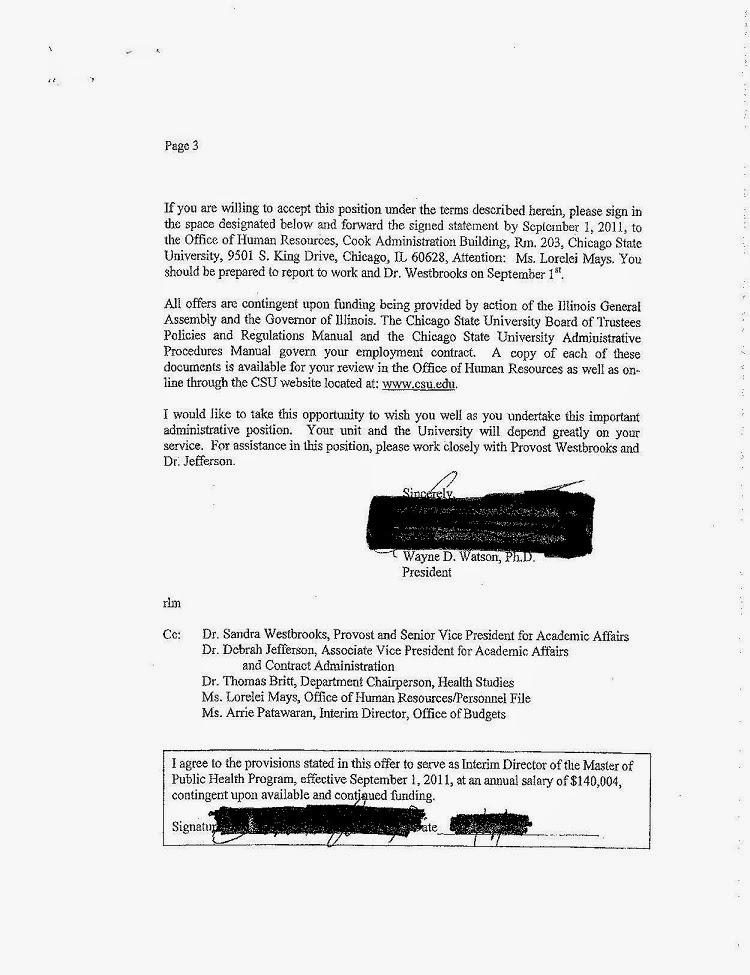 Watson’s August 26 letter precedes the job announcement for the Director of M.P.H. position by more than a month. In fact, Human Resources did not create a job announcement for Arnold’s position until September 30, 2011 (a simple inquiry to Human Resources revealed the date of the announcement). This announcement, which Human Resources created on a Friday, specified an “anticipated start date” of the next day: October 1, 2011. However, Watson waited until Monday, October 3, 2011 to actually hire Arnold, who submitted his application for the position at 4:10pm that same day. Not exactly the “equal opportunity for all state residents” described in the Illinois Human Rights Act. 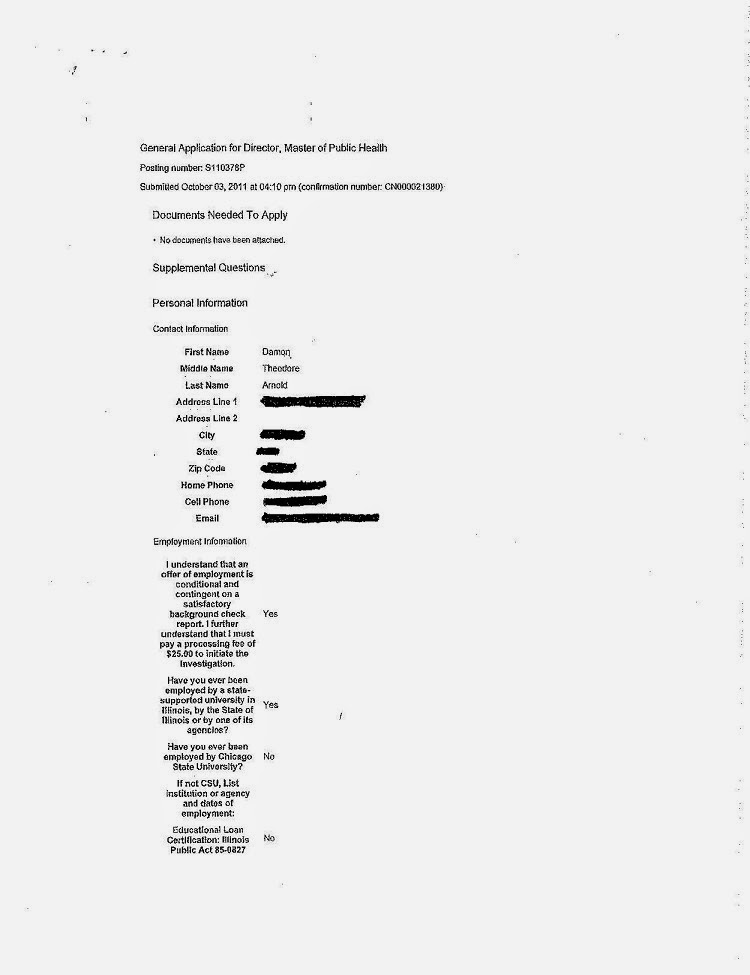 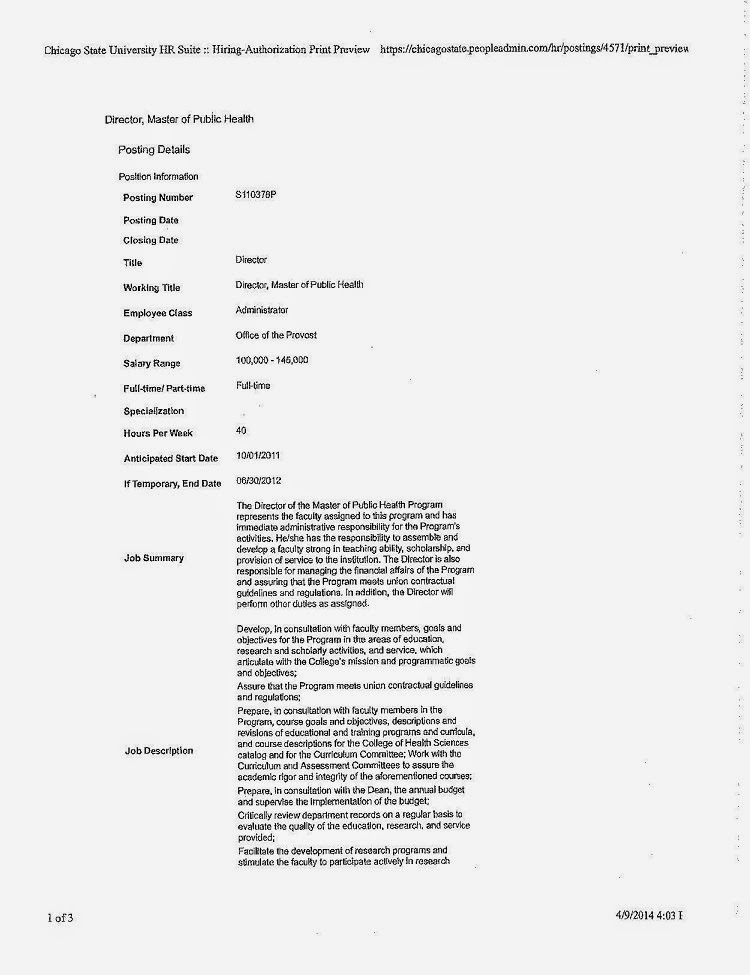 Interestingly, Watson’s appointment letter informed Arnold that “As a program director, you will report to Dr. Sandra Westbrooks, Provost . . .” Since the M.P.H. program exists in the Department of Health Studies, an academic sub-unit of the College of Health Sciences, it seems appropriate that Arnold should have reported to the Dean of the College. In fact, the Dean had no idea that Arnold’s hiring was imminent and was not copied on Watson’s offer letter to Arnold. Although the university failed to provide the public budget change records pertaining to Arnold’s original hiring, a possible reconstruction is possible. No budget line existed for the position—there was no indication of a pending hire for the position of Director of M.P.H. in the original 2011-12 budget. Thus, with Arnold’s hiring, the university had to come up with funds to cover the annual salary Watson offered Arnold: $140,004. The university created a new position, number A32600, class code 6553. In fact, the original 2011-12 budget for the Health Sciences Dean’s Office included a total of $171,590 appropriated for two pending hires: an Associate Dean and a Director of Graduate Programs. Ultimately, it seems likely that $91,194 of Arnold’s starting salary came from a partial re-allocation of monies from these two budget lines along with $1200 from another budgeted position, leaving a shortfall of $48,810 for Arnold’s salary, which the university made up from some other source.

The next fiscal year, the budget inaccurately showed the Director’s position as an appropriated budget line. In fact, on June 29, 2012, Arnold received a promotion from Watson to Interim Assistant Dean at the same salary. The funding for Arnold’s new position should have come from a simple re-allocation of funds already earmarked for the Director’s salary. However, since this position had not actually been funded, the university had to transfer money from other appropriated budget lines to cover the salary expenditure. The Budget Change Form for Fiscal 2013 shows a $4 dollar transfer from one line, a $90,000 transfer from another and a $50,000 transfer from a third (this amount is crossed out, in effect creating a shortfall of $50,000). These reallocations come from the Dean’s office in Health Sciences and the University Provost. The $90,000 from the Dean’s office comes from an account with an original appropriation of $50,000, indicating that an additional $40,000 had to come from another (at this point unknown) budget line to increase the total to $90,000. Thus, the money for Arnold’s new position did not come from funds already allocated to the Director’s position, but from other appropriated sources. Arnold’s position as Director of M.P.H. then disappears from the budget. All these monetary machinations closely resemble a shell game, with the university transferring money to fund positions that appear to be appropriated but in actuality are unfunded personal services positions. Watson's letter offering Arnold the Interim Assistant Dean's position and the fiscal year 2013 Budget Change Form re-allocating funds for Arnold's salary follow. You will note that the Dean of the College of Health Sciences did not sign the Budget Change Form. 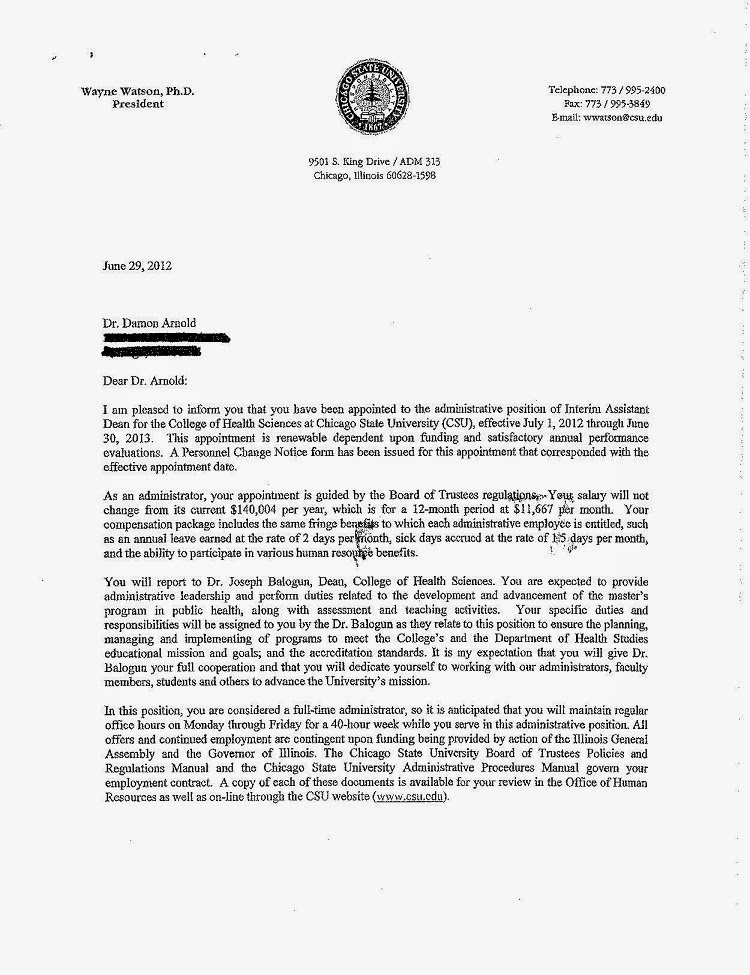 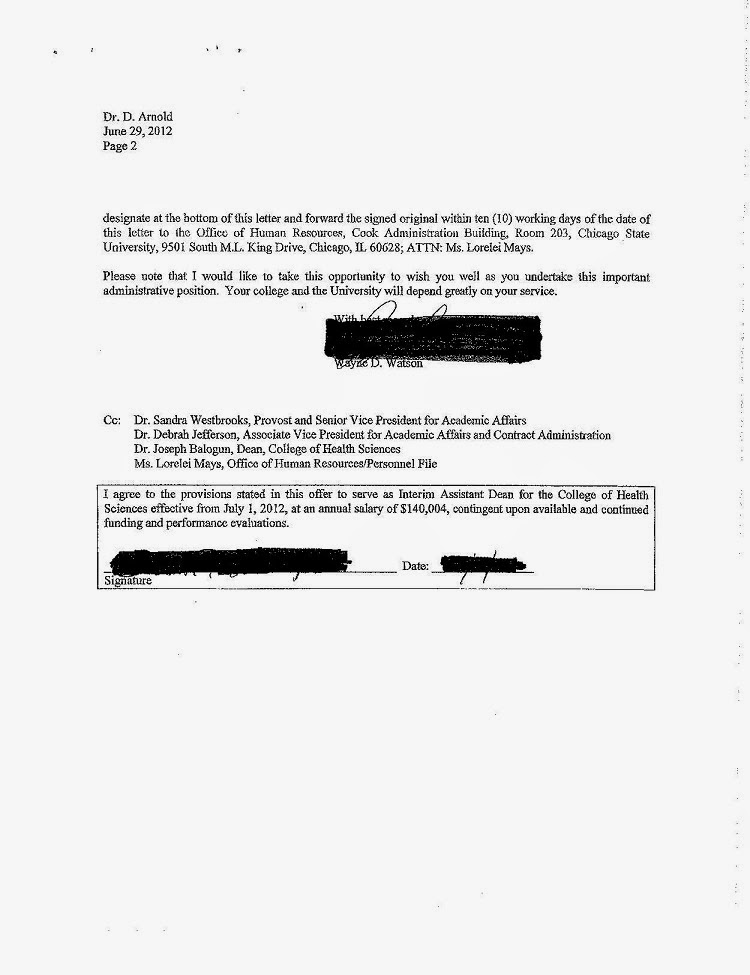 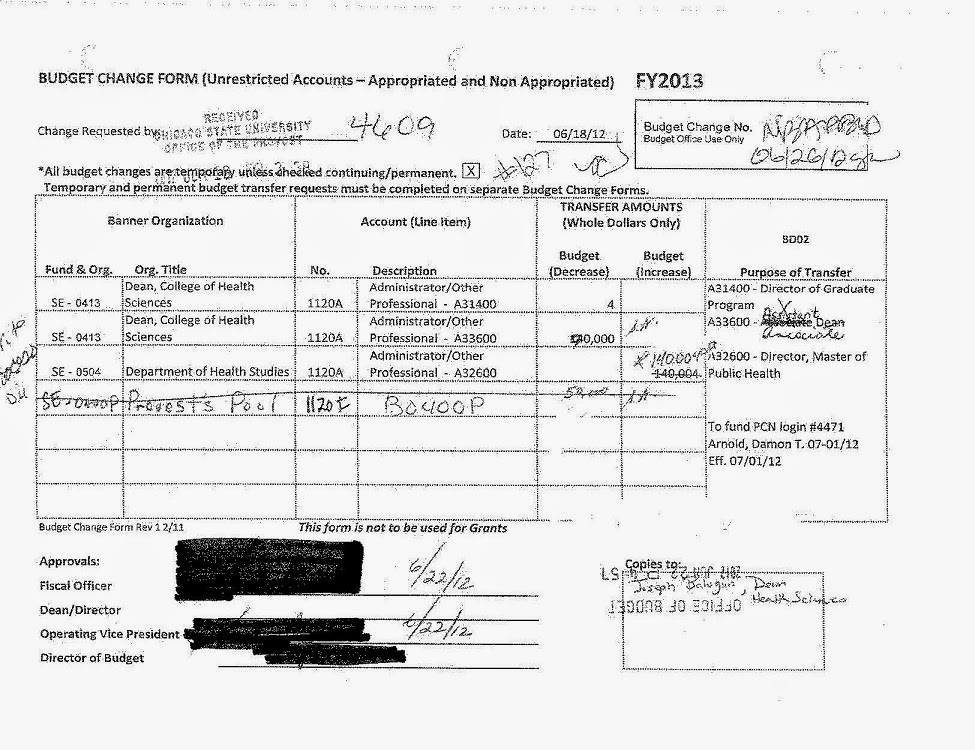 The university’s yearly reports filed with the Illinois State Legislature reveal that Chicago State has made no requests since fiscal year 2012 for budget lines for either the Director of the Master of Public Health Program or Arnolds’s position as Interim Assistant Dean. The next post will discuss this in greater detail.